When we say “drones,” most people think of expensive, high-end toys kids and even adults use to take photos from up and above. And we kinda understand that as most drones are still used for entertainment purposes. There are, however, some exceptions with modern quadcopters also showing their usefulness in real-life situations, helping make the world a slightly better (and/or safer) place.

In this article, we explore a few ways how drones can help us make the world a better place…

A tool for first responders

Drones have already been used by the police, border guards and firefighters to allow for a quick response to threats and avoid the biggest problems with getting to the site. However, the problem with most drones is their rather limited range that prevents first responders from executing longer missions and carrying additional equipment that can extend their capabilities. 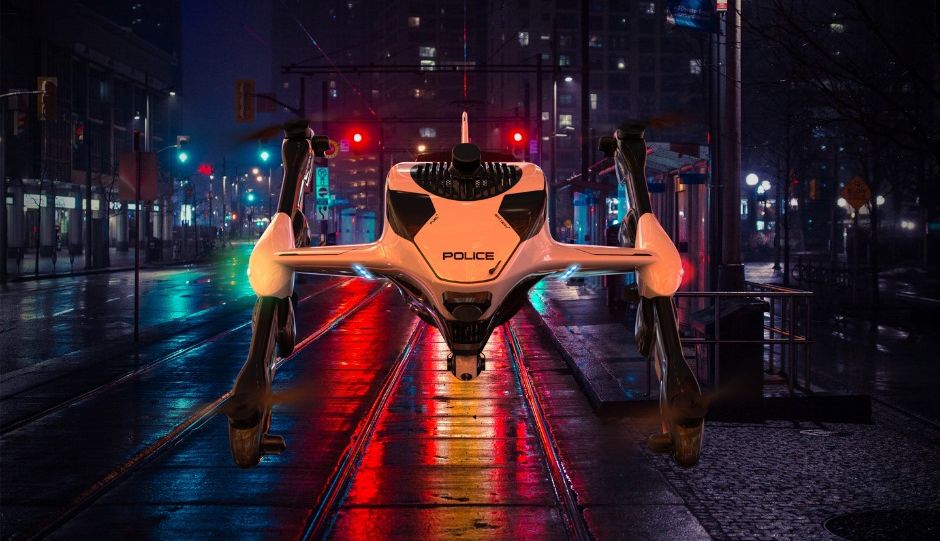 Atlanta-based Sonin Hybrid has built a drone exclusively for first responders. Called Recruit, this quadcopter is designed to keep first responders safe in a world of emerging challenges. In that sense, it offers extended flight time and greater capabilities than typical commercial drones.

Using the company’s patent-pending gasoline and battery-powered system, the Recruit can recharge batteries while in flight. The gasoline engine is hooked up to a generator, which in turn continuously charges the batteries for the four electric motors. This combo then enables the drone to stay in the air for over three hours.

Furthermore, the Recruit can reach speeds of over 140mph (225 km/h), which is three times faster than most of the fastest commercial drones available today, according to the company.

And that’s not all, coupled with a lightweight airframe and carbon fiber body – it also offers enhanced payload capabilities.

In March 2020, during the coronavirus pandemic, researchers from the University of South Australia (UniSA) worked with Canadian drone technology company Draganfly to develop a drone that could remotely detect people in crowds with infectious respiratory conditions such as COVID-19. 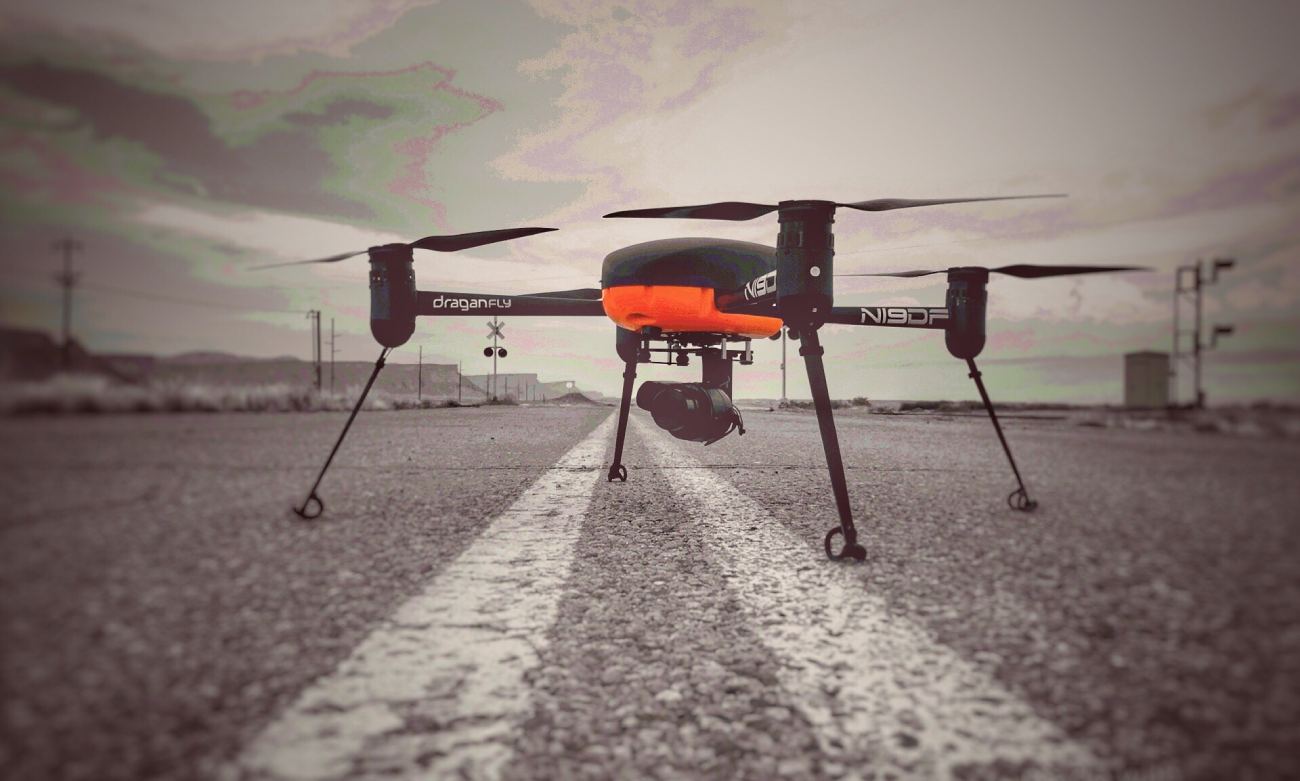 Dubbed the “pandemic drone,” it can be fitted with a specialized sensor and computer vision system that can monitor temperature, heart and respiratory rates to detect people sneezing and coughing in crowds, offices, airports, cruise ships, aged care homes and other places where groups congregate.

The researchers behind the development of this drone have previously looked at using drones to monitor and react to elderly falls, look for signs of life in war zones or following a natural disaster and monitoring the heart rate of babies in neonatal incubators.

High-rise fires are a growing problem around the world. The height of fire rescue ladders and the reach of fire nozzles are usually less than 50 meters, and their operations are often limited to one side of a building. Furthermore, because high-rise buildings are often located in urban centers, traffic can significantly lengthen response times. 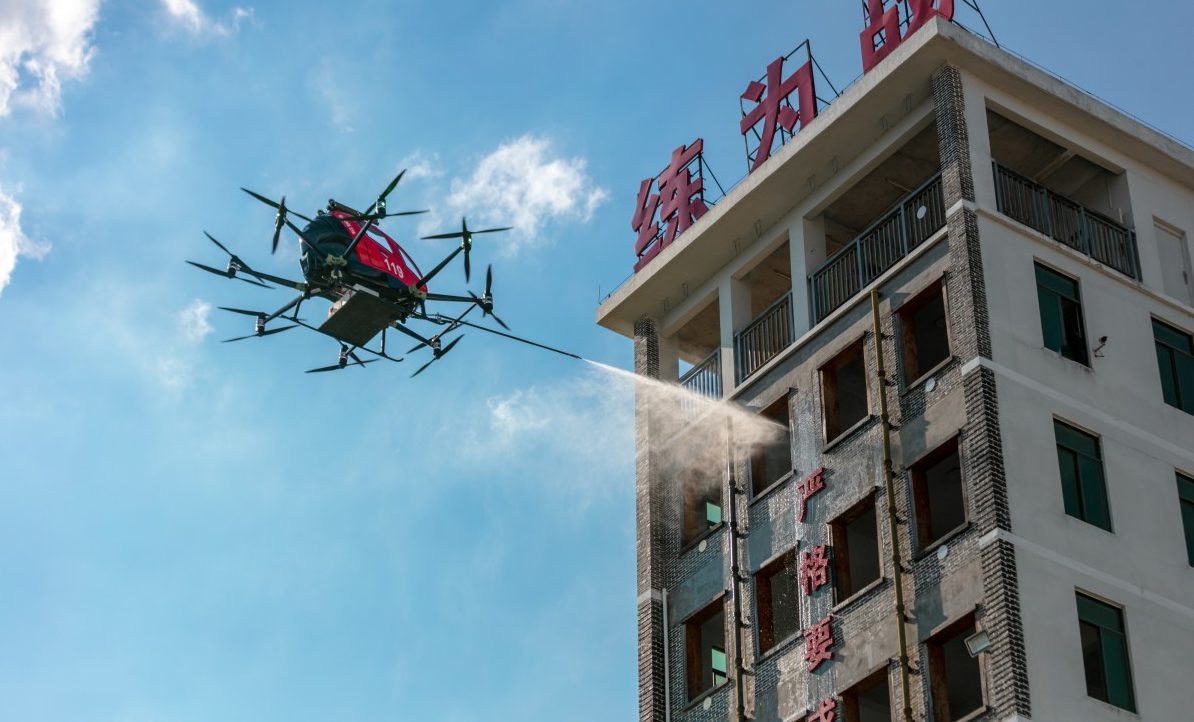 And so in July 2020, China-based maker of autonomous aerial vehicles (AAV) EHang launched a better alternative for dealing with high-rise building fires in the form of a large-payload intelligent firefighting drone. Based on its flagship product, this new firefighting version of EHang 216, “EHang 216F” is specially designed for high-rise firefighting.

With hundreds of thousands of high-rise buildings in China, the company believes the EHang 216F can become essential equipment for thousands of fire stations across China and eventually those around the world.

The EHang 216F has a maximum flight altitude of 600 meters (0.37 miles), and can carry up to 150 liters (around 40 gallons) of firefighting foams and 6 fire extinguisher bombs in a single trip. The drone uses a visible light zoom camera to quickly identify the location of fire; it then hovers precisely in position and uses a laser aiming device to fire (in succession) a window breaker, the fire extinguishing “bombs” and then a full-range spray of firefighting foam. Multiple 216Fs can be deployed to rapidly extinguish the fire.

We can’t stop or restrict economic activity, but we could catch our waste before tide, wind and currents carry it out to the open ocean. And that’s where RanMarine’s solar-powered aqua drones kick in – to perform autonomous waterway cleanup and data collection. 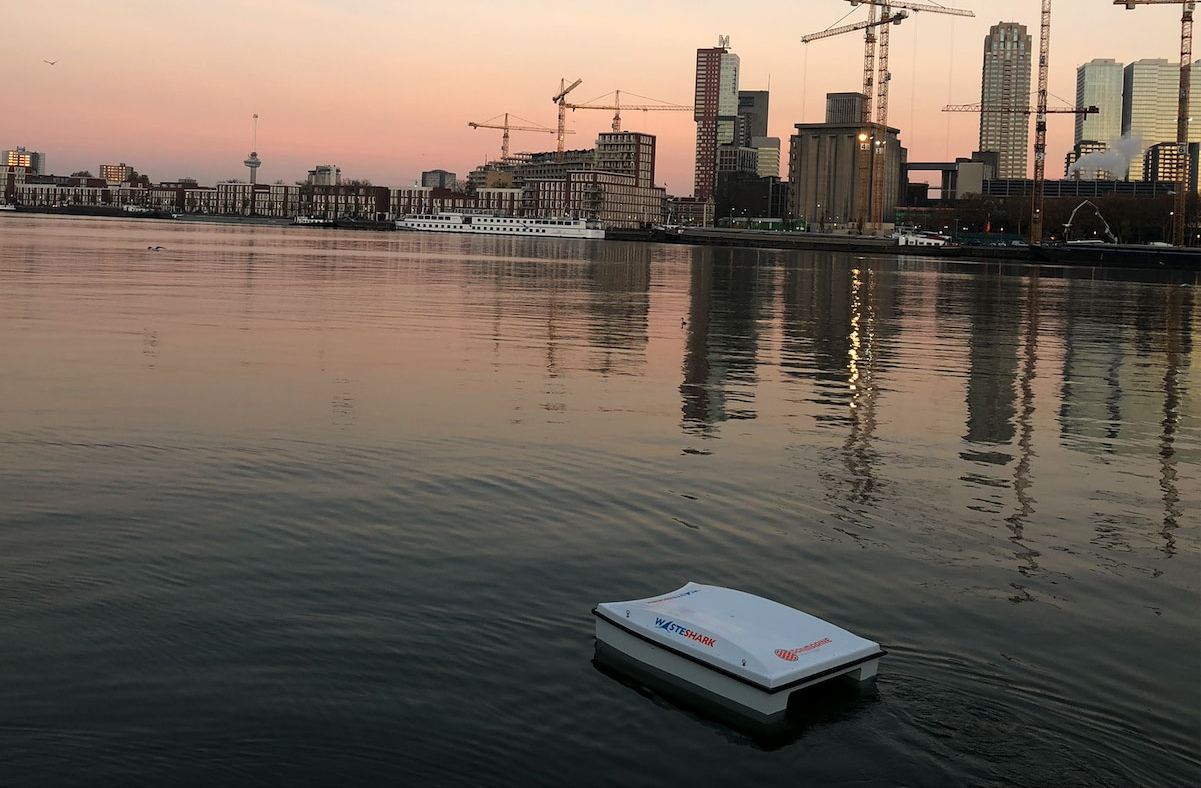 Called “WasteShark,” it resembles a miniature catamaran with a sieve-like basket under it. The drone measures about 3 feet by 4 feet, weighs about 150 pounds and trolls along the surface of the water scooping up litter, biomass, microplastics and other detritus – powered by a battery that lasts up to 16 hours, depending on conditions. Аll in all, it can “eat” up to 200 liters of trash in one trip – after it is brought back to recycling and waste-management partners for processing.

WasteShark could also be equipped with lidar to avoid collisions from up to 60 meters away, along with up to 15 customizable IoT sensors for measuring factors such as temperature, pH, depth, green algae, hydrocarbons in oil, and more. The drones use GPS waypoints and autonomous software to follow set pathways collecting waste and data – or can be steered manually via remote control.

WasteShark is best suited for harbors, rivers, and canals – so-called “waste chokeholds” that RanMarine has identified based on weather patterns, shipping and wind movements, and the tides. The company has already deployed its drone in the Port of Rotterdam and brought it stateside to the Baltimore Harbor.