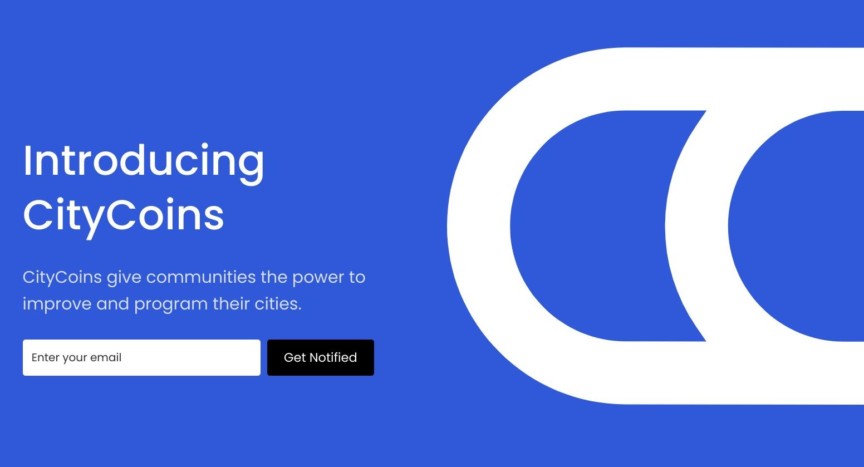 Blockchain is one of those transforming technologies that will sooner or later find its place in many services across the Internet. Cities too will be able to take advantage of it, offering new kinds of services to their constituents or redefining the existing ones (or make them better).

One project that could help city officials’ efforts comes from CityCoins, which is a new kind of open-source ecosystem that lets cities create their own cryptocurrency — and then allow citizens to support their cities while earning yield in Bitcoin.

On the tech side, CityCoins are powered by Stacks – which is a protocol that enables smart contracts on the Bitcoin network. The community mines to create CityCoins after which STX tokens are forwarded into the smart contract in a given Stacks block.

The city can claim this and convert their STX to USD whenever they want. And this is the way the city can finance special projects for the benefit of all citizens.

Because a city’s tokens are programmable, developers can create almost anything, from a voting app to accessing CityCoins-exclusive spaces.

As of February 2022, CityCoins has been implemented in Miami (MiamiCoin), New York City (NYCCoin) and Austin (AustinCoin) — while Philadelphia is looking to join the scheme in the near future, as well.

CityCoins is a software application on the Stacks (STX) blockchain that helps city governments create a unique cryptocurrency. Transactions on Stacks settle on the Bitcoin network.

New York City, Austing and Miami are already using CityCoins to increase their treasury holdings. Thirty percent of mined STX tokens are sent to the city's wallet then sold for U.S. dollars, which goes directly into the city treasury. Miners retain the rest.

Because a city's tokens are programmable, developers can create almost anything, from a voting app to accessing CityCoins-exclusive spaces.
Time to Implement
⏱️⏱️⏱️⏱️⏱️
Cost to Implement
💰💰💰💰💰
* estimates

FOR PUBLIC OFFICIALS:
Embracing a cryptocurrency service like CityCoins could help your city position itself as a savvy place to be. As such, it will attract headlines and potentially inspire new people to move to your area. Since this is a high-tech stuff, the kind of people (IT folks) this would invite are those who could help your budget down the line. In the meantime, CityCoins could also be used to fund certain city projects and invite higher citizen participation.
FOR BUSINESSES:
If your company is in the IT sector, perhaps you could partner with CityCoins and explore the option of bringing their service to municipalities your business serves. There has to be room for some profits for your company as you could help facilitate the CityCoins integration and marketing of the new service to the general population. Then, once you nail it in one city, you could expand your reach to other places — all while bringing the benefits to your customers (and their constituents).