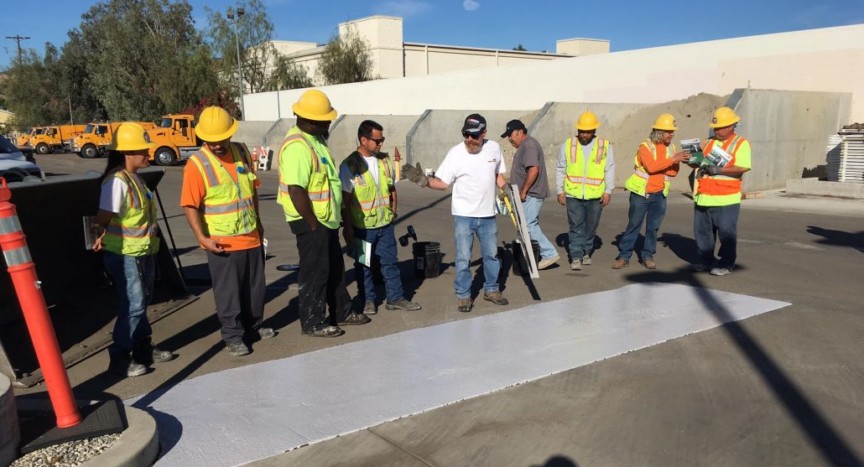 One such solution comes from the company called GuardTop, which CoolSeal was designed to achieve lower surface temperatures. The solution is a high-performance, water-based, asphalt emulsion sealcoat that does its “magic” through its lighter color and reflectivity.

Speaking of which, conventional sealcoats and dark asphalt surfaces absorb heat and energy produced by the sun, which results in higher surface temperatures that can reach in excess of 160 degrees Fahrenheit.

In contrast, CoolSeal can reduce surface temperatures by 10 to 30 degrees Fahrenheit (under certain conditions) while creating safe and comfortable environments for people and animals.

At the end of 2016, GuardTop conducted a demonstration of CoolSeal in Los Angeles by applying a sample patch at the bureau’s street sweeping yard in Chatsworth, CA. This small test proved the value of the technology and the company is hoping to attract more cities to adopt its technology.

Heat islands are a problem in the world's hottest cities (temperature-wise), with regular asphalt absorbing the heat and reflecting it back, which then leads to urban temperature increases. The high temperatures, in turn, lead to more need for energy-sucking air conditioning.

Planting more trees is one of the methods to reduce the urban heat island, and another one involves using cool asphalt paint. Actually, CoolSeal is not a paint — it is a high-performance, water-based, asphalt emulsion sealcoat that achieves lower surface temperatures through increased solar reflectivity. Applied to asphalt just like any conventional black sealcoat, CoolSeal can reduce surface temperatures by 10 to 30 degrees Fahrenheit (under certain conditions) while creating safe and comfortable environments for people and animals.
Time to Implement
⏱️⏱️⏱️⏱️⏱️
Cost to Implement
💰💰💰💰💰
* estimates

FOR PUBLIC OFFICIALS:
GuardTop's CoolSeal could be another tool in local governments' arsenal to fight climate change. While it is more expensive than conventional sealcoats, it can reduce surface temperatures thus delivering savings in the mid- and long-run. As an eco-friendly solution, it will also help local officials score points in the eyes of the public.
FOR BUSINESSES:
A construction, road-building or engineering company could develop a case for CoolSeal, partner with GuardTop and pitch the solution to local authorities. Presuming we're talking about cities with hot climates, there's clear math to be made to justify the investment in special sealcoats — rather than using conventional ones that only absorb the heat, thus helping create urban heat islands.