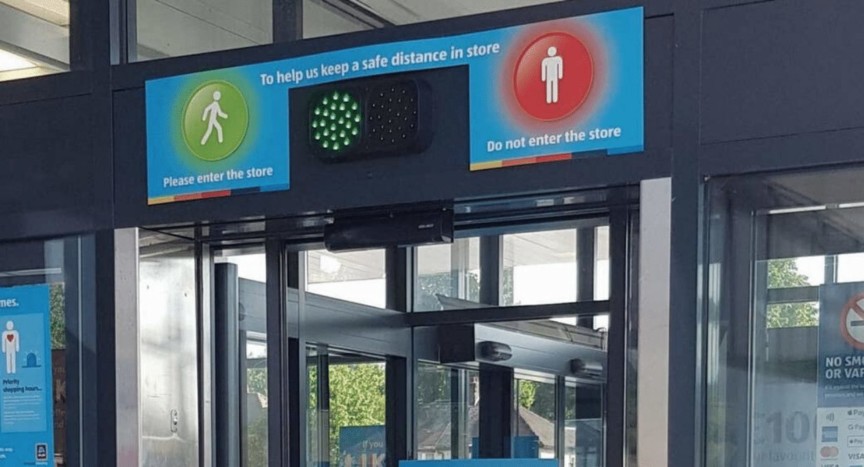 In May 2020, supermarket chain Aldi launched a special “traffic light” system in its UK stores to keep customers and their staff as safe as possible during the COVID-19 pandemic.

Like its competitors, Aldi has also introduced other changes to adapt to the novel circumstances, including providing face masks for all employees working in the store and pushing online grocery sales harder than ever.

This “traffic light” system, however, is made for customers that shop instore and is being implemented in order to control the number of shoppers in a store at any one time.

Working in tandem with Aldi’s outdoor queuing system, a red and green light are set up by the entrance to the store. The light will show red and only turn green, letting the next customer into the store when there is enough space inside for them to enter.

Also, Aldi’s automatic doors only open when the lights are green, while the number of customers allowed inside is calculated based on the shop’s size and social distancing requirements — allowing people to remain two meters apart at all times.

Initially, the traffic light system was trialed in just 10 of Aldi’s stores, and having proved successful – it has been expanded to their 874 UK stores.

“The protection and safety of our customers and employees is our top priority and this new system is an accurate and effective way to allow us to control customer numbers in stores,” Aldi communications director Richard Thornton said at the time. “The system’s trial was well received by our customers and we will be gradually rolling this new social distancing measure out nationwide from this week.”

Later in the year, Aldi announced plans to upgrade the system with audio and visual prompts for hearing- and sight-impaired people. Once updated, it will give verbal instructions to customers queuing outside stores, while a visual display unit will give a waiting time.

Ocucon, the UK technology company that developed the traffic lights system, said other major retailers were planning to follow Aldi in deploying them, as well.

Initially, the system was tested in just ten of Aldi's UK stores and after proving to be a success, it was rolled out across their 847 stores across the country. The next step is to introduce audio and visual prompts for hearing- and sight-impaired customers.
Time to Implement
⏱️⏱️⏱️⏱️⏱️
Cost to Implement
💰💰💰💰💰
* estimates

FOR PUBLIC OFFICIALS:
This is a system savvy municipalities could introduce in the city hall and other local government buildings where citizens gather. It is relatively easy to implement and makes sure social distancing rules are effectively promoted and, more important, followed through. Such a traffic light system also shows local constituents that their (local) government is taking care of them - and that brings in votes while helping the person pushing that initiative advance in his/her career.
FOR BUSINESSES:
Contact Ocucon and see whether you could bring their system to your local market(s). Then, see if you can offer it to your municipality which could put it in the city hall and other buildings where citizens gather for city services. The traffic light system will work even when the pandemic ends, providing more privacy and space to those who have already entered the building. And as such, it could also be offered to other parties (businesses) operating in the municipalities your company serves.