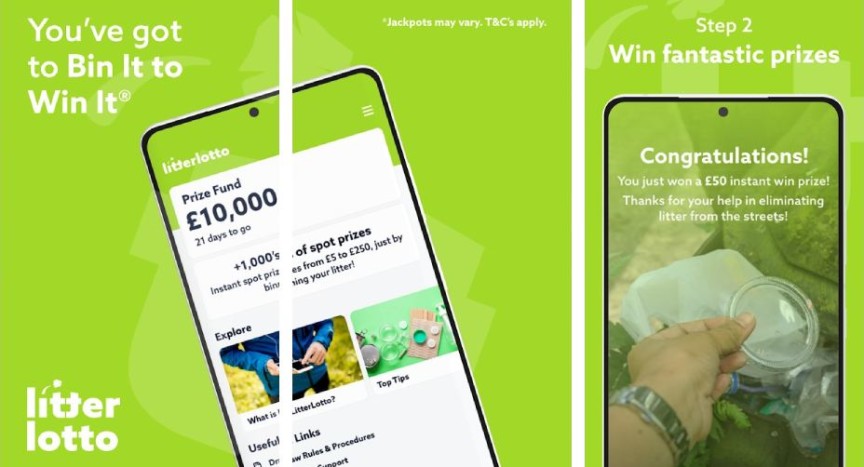 In October 2021, a new app was launched in the UK – designed to encourage people to bin litter. Called LitterLotto, it is calling on the public to clean up streets and countryside and tackle the problem of two million pieces of litter (23 items per second) discarded every day. In return, it lets them win a monthly jackpot of £10,000, as well as one of the spot prizes ranging from £5 to £250.

In order to get started, users download the free app, then take a picture through it as they bin litter, anywhere. Each time they do so, they get another entry into the LitterLotto, and more chances to win spot prizes.

The app provides guidelines for photos, requiring the top of the bin, the user’s hand and the piece of litter all to be visible in order to be eligible for an entry in the draw. Every single item of rubbish counts, cigarette butts included. Users can also earn extra entries in the draw by recommending friends and family. And if someone a user recommended wins the jackpot, the initial person also wins a prize.

“We have created an app and have started a movement aimed at tackling the UK’s litter issue head on. We’re encouraging people to take the problem into their own hands and win prizes for their proactivity,” said Simon Jacobs, director from LitterLotto (aka “The Lord of Litter”). “I am passionate about making our environment a cleaner place to live. LitterLotto puts the litter problem in the public’s hands and incentivises them to make a difference. It’s a fantastic concept, and a win-win for everyone, most notably our planet.”

In addition to the UK, the app is also available in Ireland where it caught the attention of McDonald’s — which decided to partner with LitterLotto as part of its “Keep it Clean” campaign.

Actually, LitterLotto was first tested in Denmark in August 2021, where it was received with overwhelming support and fantastic results — with almost 85% of all the litter binned being picked up from the ground by tens of thousands of users. The hope is that it will have a similar success in the UK and in other markets where it eventually launches.

The free to download LitterLotto app is designed to encourage people to bin litter. In that sense, it lets users take a photo of every piece of rubbish they pick up and bin. Each photo equates to an entry into the monthly jackpot draw, along with a range of other, smaller prizes. The monthly jackpot in the UK is set at £10,000 per month.

It is estimated that two million pieces of litter are dropped in the UK every day, which works out as 23 items per second. So an app like this could certainly help, or at least that's what LitterLotto founders think — and also McDonald's which partnered with the app maker to encourage Dubliners to bin litter for rewards.
Time to Implement
⏱️⏱️⏱️⏱️⏱️
Cost to Implement
💰💰💰💰💰
* estimates