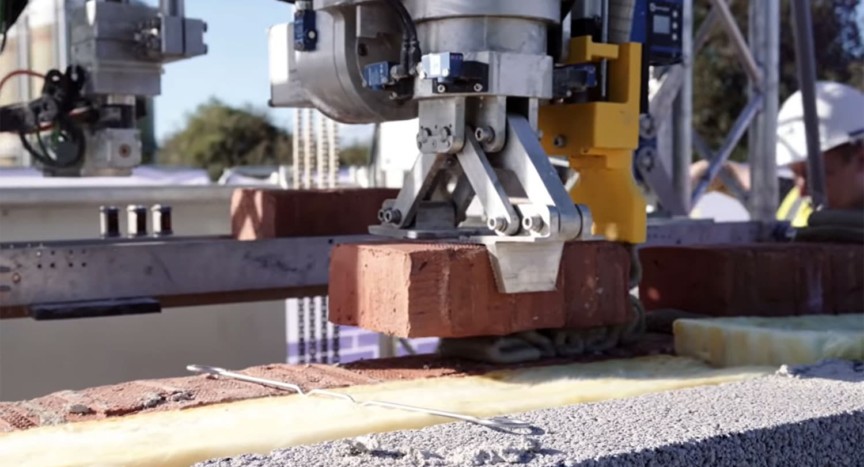 In October 2020, the Automatic Brick Laying Robot (ABLR) has started building a three-bedroom house in East Yorkshire’s Everingham. The developers described it as the UK’s first house built by a robot bricklayer rather than human laborers.

Manufactured by Pocklington, UK-based Construction Automation Company, the Brick Laying Robot is being put into operation at a construction site to replace people, ensure safety and health.

The machine is mounted on a track a rides atop a 30 foot (9 meters) high frame, eliminating the need for scaffolding and for people to work at height. It needs two workers to control it, load bricks and mortar into its feeds, and also to complete damp-proofing and the pointing that finishes the mortar joints.

The system is controlled by a tablet-based user interface and employs a “sophisticated software control system” that allows it to read digital copies of architectural plans.

The quality of the building by the ABLR robot is ensured by sensors that measure each individual brick to align it and match with the edge of the next brick, creating a solid structure. Once completed, this will be the first home in the UK built with a robot and possibly the first in the world.

“Our goal is to automate housebuilding as far as we can,” said one of Construction Automation’s founders, Stuart Parkes. “By doing this, we can increase productivity for the industry, improve health and safety, and guarantee quality.”

After four years in the making, Pocklington-based Construction Automation's Automatic Brick Laying Robot (ABLR) has moved from factory testing to building its first home. In a world-first, the robot has laid all the bricks, blocks, and mortar while running on a track around the foundations. Overall, the house contains around 10,000 bricks and took the ABLR about two weeks to build.

The ABLR consists of a robot and a sophisticated software control system that reads digitized versions of the architect's plans. It is controlled from a tablet, allowing for all the data about a specific build to be accessed remotely — while requiring just two people to work on each house.
Time to Implement
⏱️⏱️⏱️⏱️⏱️
Cost to Implement
💰💰💰💰💰
* estimates

FOR PUBLIC OFFICIALS:
While bringing Construction Automation won't help anyone get more jobs in the community, it could help with other issues such as affordable housing — which is a major problem in many cities. At the same time, bringing such a company — or its affiliate — to the city will also show that you care about new technologies making your municipality that much more attractive to the top talent as well as new high-tech businesses. And if you can get the credit along the way, that much the better.
FOR BUSINESSES:
Explore the partnership opportunities with Construction Automation and see if they can help you bring their technology to the municipalities you serve. Their brick-laying robots could help solve the affordable housing issue in pretty much any city that has that problem. And considering the ever-increasing price of real estate, this is a real problem looking for a good (automated) solution. That's where the brick-laying robot kicks in, helping keep the costs at bay while bringing more business to your company.