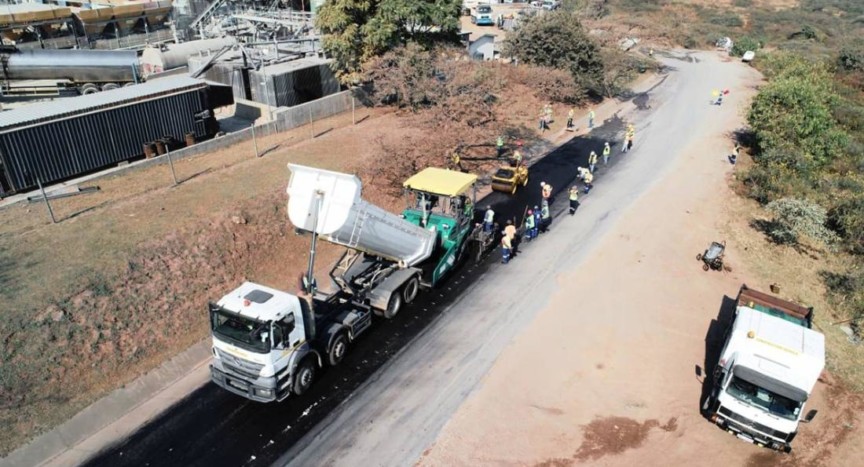 Bad roads of South Africa are said to be a major problem, with an estimated $3.4 billion per year in vehicle repairs and injuries. By laying a road section partly made of plastic, Shisalanga Construction is demonstrating a way to manage plastics waste while at the same time improving the quality of the roads in the country.

Between August and October 2019, the company used recycled plastic asphalt to build roads in the province of KwaZulu-Natal (KZN) on the eastern coast of South Africa. During that time, nearly 40,000 recycled two-liter plastic milk bottles were used to repave more than 400-meter section of the road in Cliffdale.

The next step for Shisalanga is to put its asphalt in more roads, and in that sense – it has applied to the South Africa National Roads Agency to lay 200 tons of plastic tarmac on the country’s main N3 highway between Durban and Johannesburg.

In order to make this happen, the company converts high-density polyethylene (HDPE) — a thick plastic typically used for milk bottles — into granules at a local recycling plant. These small particles are then heated to 190 degrees Celsius until they dissolved and mixed with the additives. The bottles make up about six percent of the asphalt’s bitumen binder, and each ton of asphalt contains about 118-128 bottles.

According to the company, this process produces less toxic emissions and the asphalt improved with this system is more durable and more resistant to water; it can also withstand temperature as high as 70 degrees Celsius and as low as -22 degrees Celsius. Furthermore, the novel method promises to deliver significant financial savings in the long run, as such roads are expected to last longer than the national average of 20 years.

The early results suggest this is a promising technology, and considering that similar projects have been and are being tested in other parts of the world, we may be looking at a new trend. One that would merge recycling with road infrastructure.

It is estimated that around 275 million tonnes of plastic waste are generated each year around the world, so the idea to do something useful with all that waste makes perfect sense. Shisalanga's concept could be a part of the current mass movement to reduce plastic waste and to take it out of the landfill.
Time to Implement
⏱️⏱️⏱️⏱️⏱️
Cost to Implement
💰💰💰💰💰
* estimates

FOR PUBLIC OFFICIALS:
Tackling the plastic waste problem is an easy win for any public official. However, embracing the plastic asphalt technology will require a multi-party approach that will involve a recycling plant, a road-building company, and funds to make that happen. It is worth the effort considering this is a 2-for-1 technology we're talking about.
FOR BUSINESSES:
A savvy road-building company could try experimenting with plastic-infused asphalt and pitch it to government officials as a greener solution for the country's / city's roads. Similarly, plastic recycling facilities could team-up with road builders to pitch them the new kind of asphalt so that together they could score government contracts. A road that also tackles the plastic waste problem should have higher chances of winning such deals.