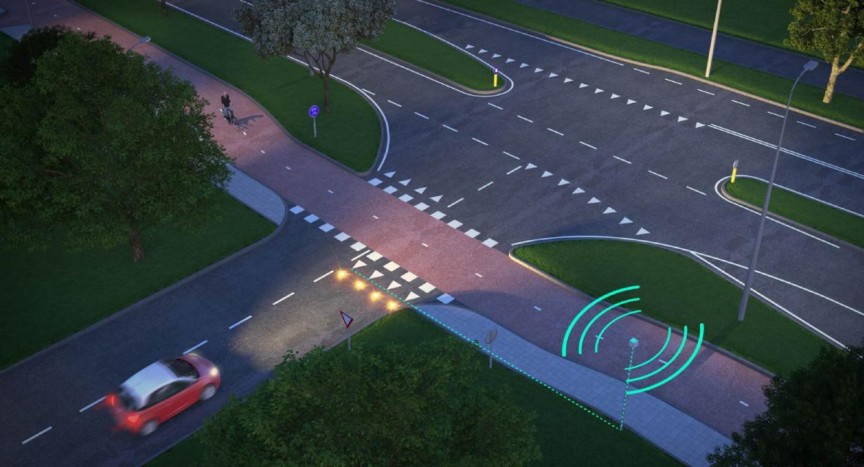 The system, called Bikescout, relies on tracking radar technology which is already being used by the automobile industry to provide signals to other road users. The radar measures the changing position of individual road users and continuously analyses this data, up to 50 meters in advance. By taking into account the speed of an approaching object (cyclist or pedestrian), the Bikescout warns the motorist appropriately.

Especially in places with poor visibility of approaching cyclists, the Bikescout system increases traffic safety by giving timely warnings of cyclists crossing the road. Highly robust, dimmable LEDs, which can be fitted flush with the road surface, can provide signals in various configurations and are more effective and visually attractive than other safety measures.

Via the mobile Internet and an online Web application, local traffic control can view the Bikescout’s availability and the traffic flow. This makes Bikescout a valuable management tool as well as making cities streets safer.

In April 2016, BikeScout has been piloted near the Meerenakkerweg-Kasteellaan roundabout in the Dutch city of Eindhoven.

Cycling is becoming ever more popular, and not just with road users. Governments are keen to include the bicycle as part of their sustainable and inclusive transport policies.

But more cyclists on the roads places added strain on motorists, especially in busy urban areas. The Bikescout intelligent warning system can make life safer for cyclists by notifying motorists via LED indicators in the road surface. It is potentially a life-saving technology that is also relatively easy to install.
Time to Implement
⏱️⏱️⏱️⏱️⏱️
Cost to Implement
💰💰💰💰💰
* estimates

FOR PUBLIC OFFICIALS:
Procuring the Bikescout system should be a part of the wider push to invite people to cycle more. It's for their own health and to help solve the congestion problem, which is becoming a major issue in many cities around the world. In that sense, it could help local officials score points in the eyes of their constituents.
FOR BUSINESSES:
A company could prepare a project to help get more people to cycle to work — or just for fun. As part of that project, Bikescout would be installed at intersections to make cyclists safer. The cost of deploying these LED lights and sensors could be partly funding by the local government as well as a potential sponsor that wants to be affiliated with a healthy lifestyle.