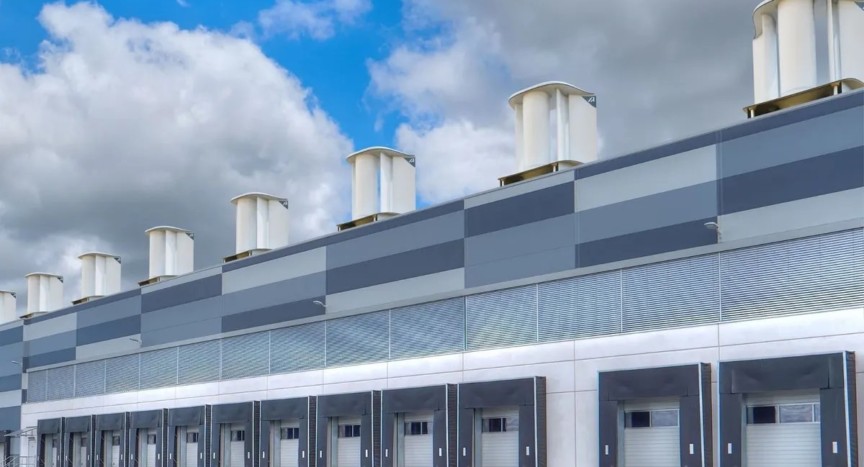 In October 2022, Aeromine Technologies unveiled an intriguing bladeless wind energy turbine that integrates with existing solar energy systems to help property owners meet increasing demands for on-site renewable energy. The scalable and motionless system easily installs on the edge of a building generating up to 50% more energy at the same cost as rooftop solar PV.

Unlike standard wind turbines that rely on rotating rotor blades and are seldom installed within city limits, Aeromine is motionless. The technology leverages aerodynamics similar to airfoils on a race car to capture and amplify each building’s airflow. Requiring just 10 percent of the roof space needed by solar panels, the stationary, silent and durable Aeromine unit generates around-the-clock energy in any weather. Aeromine systems consist of 20-40 units installed on the edge of a building facing the predominant wind direction and will work seamlessly with a building’s existing electrical system.

Plus, it can be combined with rooftop solar to generate up to 100% of a building’s onsite energy needs, while minimizing the need for energy storage.

The Aeromine system can utilize a small footprint on a building’s roof, providing commercial property owners with an effective new tool in their drive toward energy independence.

Aeromine’s patented technology was validated through joint research with Sandia National Laboratories and Texas Tech University. The system is vibration free, silent, and easy to install.

It is also being piloted by BASF Corporation, which tests the Aeromine system at its manufacturing plant in Wyandotte, MI.

Property owners are increasingly being asked to source energy from renewable sources. Sometimes that is possible and sometimes, well, it's hard. Some of them are turning to install solar panels on top, but that may not be enough for the most demanding tenants.

Aeromine Technologies' new motionless system can add the power of the wind to pretty much any building without making it look weird. It utilizes a small footprint on a building's roof and can work in combination with solar panels and other installations.

The technology has already been validated through joint research with Sandia National Laboratories and Texas Tech University, and is being piloted by BASF Corporation at its manufacturing plant in Wyandotte, MI.
Time to Implement
⏱️⏱️⏱️⏱️⏱️
Cost to Implement
💰💰💰💰💰
* estimates

FOR PUBLIC OFFICIALS:
Adopting Aeromine Technologies' system in your municipality is the right thing to do. You can put it on top of the local government's buildings and show your community that you care about the environment. This will also send another message that you are willing to embrace novel technologies and should, therefore, be re-elected. Or promoted if you're not an elected official. It's a win-win across the board.
FOR BUSINESSES:
Aeromine Technologies' system is something pretty much any savvy municipality should adopt, even if they don't know it just yet. So you should contact the company and explore the option of bringing their technology to the areas your business serves. Considering the benefits and the fact that it can work with existing solar panel installations, this should be an easy sell. Thus you wouldn't just make money on this deal, but also do something good for the city/town. Sounds like a plan to us.