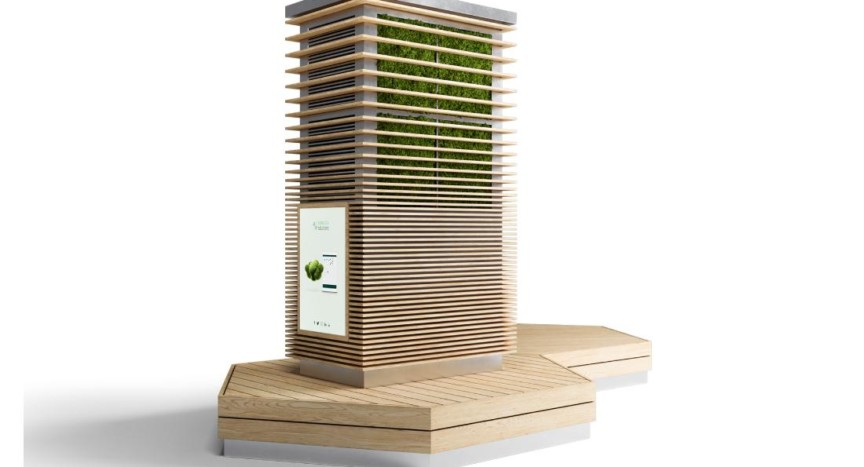 The CityTree consists of a bench, a green wall, tools to measure the performance and environmental data, solar panels and a battery to power the automatic irrigation system. The air filters have the capacity equivalent to as much as seven thousand people to breathe freely, according to Green City Solutions.

A tufting plant called biting stonecrop or wallpepper, sedum acre, is used for the protective layer on the moss; the green wall can bind more than 80% of the fine dust in certain cases, according to some of the measurements.

The manufacturers claim one CityTree is equivalent to 275 trees. The calculations revealed the air filters take out a maximum of 240 tons of carbon dioxide per annum, but that they also save citizens from nitrogen dioxide.

The CityTree can be tailored to the specific requirements of towns, companies or the property sector. And the added value is always the same — a significant improvement in the quality of life.

The suitability of CityTree installations is being analyzed across the planet as they must fit in what is usually a limited space in the street where they are needed. All in all, the German company had more than 50 CityTree installations in over 10 countries. Among cities that got their CityTree are London, Newcastle, Berlin, Oslo, Paris, Drammen in Norway, Amsterdam, Brussels and Hong Kong.

Pollution is a major problem in many cities around the world, and solutions are neither easy nor cheap. It would take years for countries to completely move to renewable energy and for electric vehicles to hit the tipping point.

One piece of the puzzle could be a CityTree. It can add a "dose of green" to concrete blocks of buildings, while also improving the quality of air. Plus, it's a bench, thus a meeting point for people in the area. As such, a CityTree is an instant win, with the only problem being how to make it fit its surroundings.
Time to Implement
⏱️⏱️⏱️⏱️⏱️
Cost to Implement
💰💰💰💰💰
* estimates

FOR PUBLIC OFFICIALS:
CityTree is one of those "easy sell" projects for local governments. It's green, it's innovative, it clears the air and it also doubles as a bench. Furthermore, it is also a simple way to score (green) points in the eyes of the public.
FOR BUSINESSES:
Instead of waiting for the government to procure "regular" benches, a smart company could pitch a project involving multiple CityTrees to be placed at various locations (i.e. squares, open markets, etc) throughout the city. Because it's not only green but also clears the air and doubles as a bench — CityTree should be an easy sell.