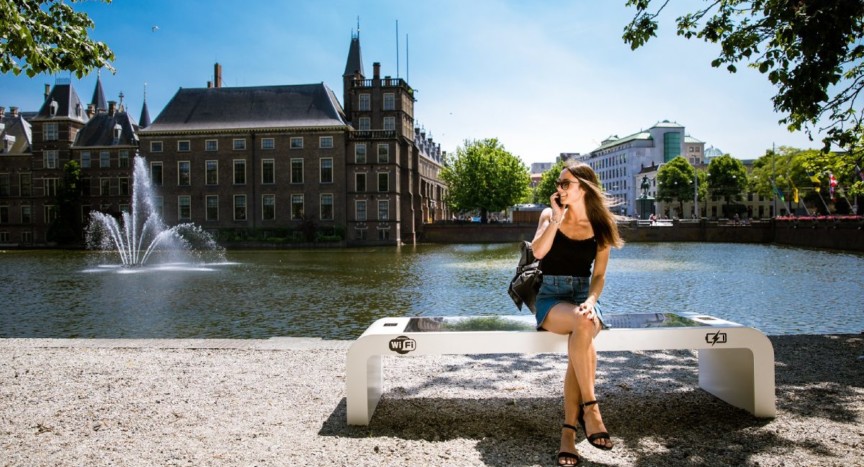 Solar benches have been around for a few years now, but for one reason or another – they are still not being adopted by many municipalities around the world.

It could be that their aesthetics may not fit every surroundings or it could be that many city officials are not aware of them at all. Nevertheless, in some cities, we have seen solar benches turning into neat, little social spaces.

These benches (obviously) get their power from the sun; the energy is stored in a big battery and made available to people 24/7, who could then use it to charge their mobile devices — as well as electric bikes and scooters — using either wireless chargers (for phones) or USB ports. The best part is that some of these benches also include temperature control and can’t get warmer than 30 degrees Celsius.

According to Dutch company InfraMarks — which was one of the first to introduce solar benches to the public — this sort of street furniture is perfect for an upgrade of pretty much any area. And it says that from the experience, having installed more than 150 solar benches worldwide.

The company’s products are said to be resistant to vandalism and need only to be checked once a year.

Dutch company InfraMarks was one of the first to introduce a solar bench to the public. According to them, this sort of street furniture is perfect for an upgrade of pretty much any area — featuring mobile device chargers to allow everyone to add more juice to their phones and tablets. Also, there are versions with more power for charging electric bikes and scooters, and optional upgrades that add 4G internet and air quality sensors to the mix.

The company's smart benches are said to be resistant to vandalism and need only to be checked once a year. Combined, those features helped it deliver more than 150 installations across the world.
Time to Implement
⏱️⏱️⏱️⏱️⏱️
Cost to Implement
💰💰💰💰💰
* estimates

FOR PUBLIC OFFICIALS:
Just like regular benches, these smart benches also bring people together while at the same time helping them charge their devices — including phones and tablets, as well as e-bikes and scooters. As such, it shouldn't be complicated to sell the idea of procuring one of these benches for your municipality, all while getting you some (political) points along the way. After all, most people appreciate renewable energy projects and also like the idea of having a place to charge their phones for free.
FOR BUSINESSES:
See if you can contact InfraMarks to bring their smart benches to the cities and towns where your business operates. This sort of smart furniture should be an easy sell considering all the benefits it brings - basically, it is a regular bench that also lets people charge their devices for free. And if it also happens to offer free Internet (important for touristic spots) — that much the better. Sell on the benefits it would bring to the local politician looking to impress his/her constituents - and you're almost there.