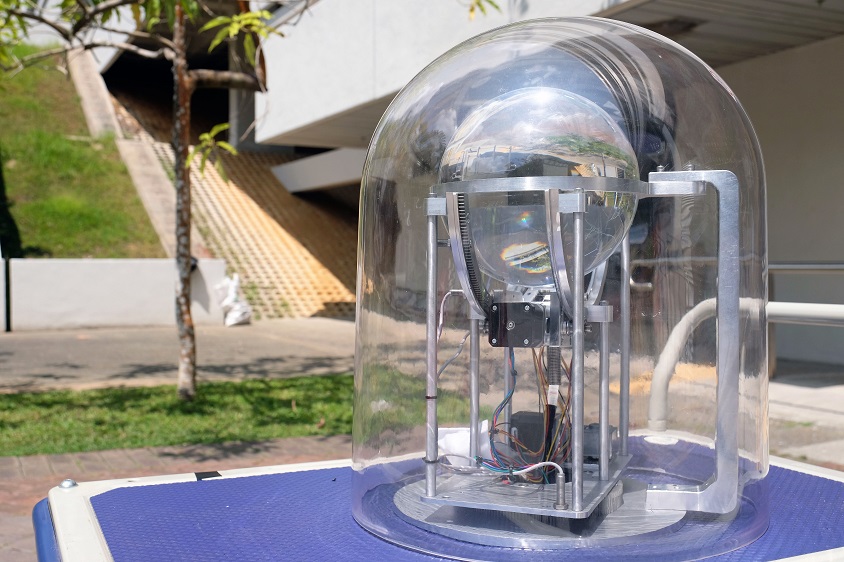 In Singapore, authorities and businesses are looking at the feasibility of digging deeper underground to create new space for infrastructure, storage, and utilities. Therefore, the demand for round-the-clock underground lighting is expected to rise in the future.

And so in March 2021, engineers from Singapore’s Nanyang Technological University (NTU) Yoo Seongwoo and Charu Goel unveiled a smart device to harvest daylight and relay it to underground spaces, reducing the need to draw on traditional energy sources for lighting.

Said smart device consists of an off-the-shelf acrylic ball, a single plastic optical fiber — a type of cable that carries a beam of light from one end to another — and computer chip-assisted motors. The prototype designed by the team weighs 10 kg and has a total height of 50 cm.

When the acrylic ball is facing toward the sun, it acts as the solar concentrator that focuses the incoming rays of sunlight onto the optical fiber. The focused sunlight is then collected into one end of a fiber cable and transported along with it to the end that is deployed underground. Light is then emitted via the end of the fiber cable directly to a dark space in order to give it light.

The ball itself is stationary and surrounded by a transparent polycarbonate dome to protect it from the elements. The engineers inserted a GPS and clock-enabled chip into the ball to adapt the location of the optical fiber throughout the day. This helps the team ensure that the fiber is always at the back of the ball and is not blocking any sunlight. The platform is tiny, so it is driven by just a couple of low-power electric drives.

The device is lightweight and compact, making it extremely suitable to be incorporated into existing infrastructure in the urban environment, such as on top of a conventional lamp post.

The NTU team tested the smart device in a pitch-black storeroom to simulate an underground environment. They found the device to be more efficient than LED bulbs, and is being more than two times brighter than commercially available LEDs.

It is hoped that a commercial version of the technology could incorporate a pole-mounted ball, along with an LED bulb beside the light-emitting end of the fiber, which would automatically switch on at sunset.

Made up of an acrylic ball, a plastic optical fiber and computer chip motors - the prototype of the device stands 50cm tall and weighs 10kg. An additional 3mm-thick transparent tough plastic forms a dome around the device to protect it from environmental factors such as dust and ultraviolet light.

The device can potentially reduce our dependence on conventional light sources like LED bulbs, moving a step towards sustainability.
Time to Implement
⏱️⏱️⏱️⏱️⏱️
Cost to Implement
💰💰💰💰💰
* estimates