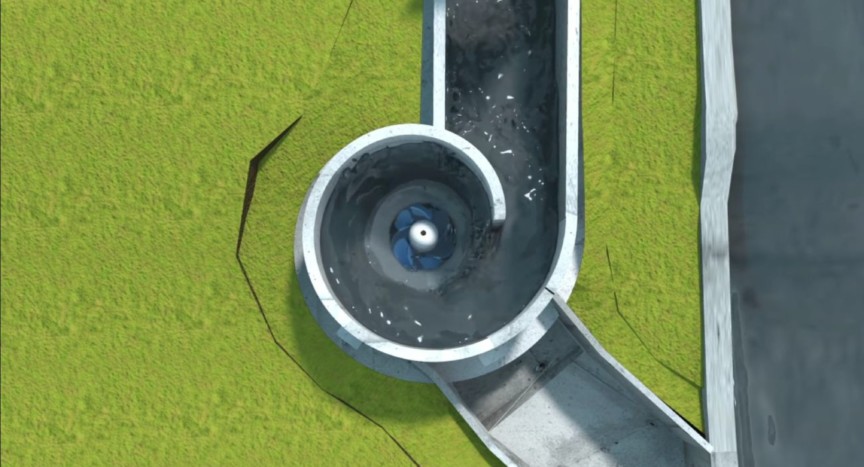 With crude oil deposits set to be exhausted by 2052 based on current consumption and expected population growth, the energy industry and global governments are investing in reliable renewable energy sources. Hydroelectric plants are already used to generate a ton of electricity but that doesn’t mean there is no room for further growth.

Most hydroelectric power plants use dams to store river water into a reservoir. Water is then released systematically through an opening in the dam, and as the water flows through – it turns the turbine which activates the generator. These “old school” hydropower plants are often massive but have a huge impact on the environment, typically requiring flooding of the land.

There is also the second kind of damless hydropower plants — also known as run-of-the-river plants — which are thought to be ideal for energy generation for settlements near a river or stream as they don’t require alteration of the course of the river.

One approach to building a damless hydropower plant involves diverting a section of the running body of water into a pipe that runs downwards through a turbine. Such a power plant uses the force of the water flowing downwards via gravity to turn the turbine and generate electricity. The water is then returned to the flowing river without depleting the river’s natural resources. This is an eco-friendly approach that lets fish and debris pass through safely.

Belgian company Turbulent is specialized in these kinds of micro damless hydropower plants and its products have so far been positively received by the public. Its original plant, installed in Chile, has a full flow of 1.8m3/s with a given height difference of 1.7m. During the test phase, this setup gave a useful electricity output of 15kW at an efficiency of 50%. In other words, this is enough to power up to 60 houses in Chile given an average household power demand of 0.25kW.

Turbulent dubs its plants to be easy to install and monitor, requiring minimal maintenance — while having a lifetime of 30 years. Compared with a solar panel array of equivalent capacity, the company says its technology will generate 8 times more energy using only 6% of the space.

Turbulent sees 350,000 untapped potential sites in Europe — including rivers or canals with small drops — where its dams could be installed, generating electricity for the local community as well as a surplus that could be returned back to the grid.

In addition to Chile, the company has managed to install its damless hydropower plants in Taiwan, the Philippines, Suriname, Portugal, France, Estonia and Indonesia.

Belgian company Turbulent has developed a damless hydropower plant that diverts a section of the running body of water into a pipe that runs downwards through a turbine. The power plant uses the force of the water flowing downwards via gravity to turn the turbine and generate electricity. The water is then returned to the flowing river without depleting the river's natural resources. This is an eco-friendly approach that lets fish and debris pass through safely.

So far, the company has managed to install its damless hydropower plants in Taiwan, the Philippines, Suriname, Portugal, France, Estonia and Indonesia.
Time to Implement
⏱️⏱️⏱️⏱️⏱️
Cost to Implement
💰💰💰💰💰
* estimates

FOR PUBLIC OFFICIALS:
If your municipality is close to a running body of water, you may want to explore the idea of building one of these damless hydropower plants. It won't hurt the environment but could generate enough electricity to cover some of your city/town's needs — and perhaps even a surplus you could return back to the grid. The solution is more efficient than solar panels and could give your municipality some green credentials — while helping your career, as well.
FOR BUSINESSES:
This is the opportunity for smaller energy and construction companies, as well as those writing project proposals — contact Turbulent and explain the situation in municipalities your business "covers." This, of course, presumes there is some running body of water in those cities and towns that could be partially used for building a (relatively) low-cost damless hydropower plant. It could take some time to get all the permits and people on board, but it is a potentially highly lucrative venture. Worth checking out.