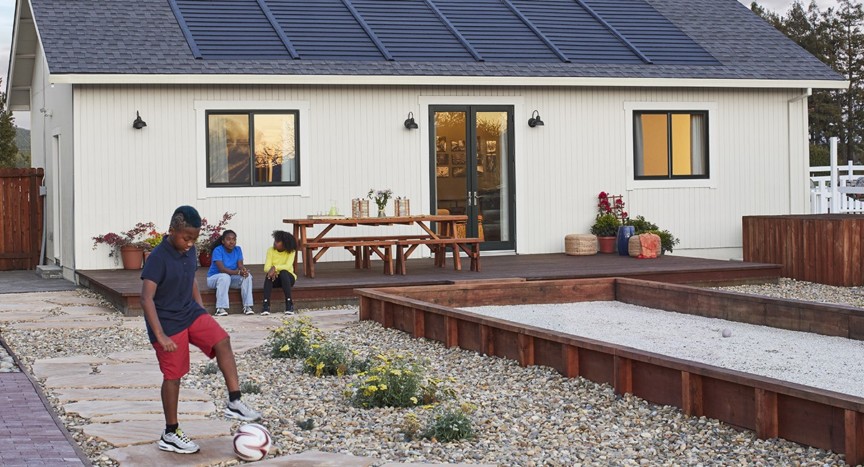 GAF Energy, which is a Standard Industries company, is also the company behind Timberline Solar, the only roof system to integrate solar technology into traditional roofing processes and materials directly.

Dubbed to be in a “class of its own,” Timberline Solar is reliable, durable, cost-effective, easy to install, and “aesthetically superior.” The ES boasts an industry-defying depth of less than a quarter inch and integrates with traditional shingles to create a “sleek and attractive look.”

Over five million new roofs are installed on U.S. homes each year. One out of every four roofs comes from GAF, the sister company of GAF Energy and the largest roofing and waterproofing company in North America. With access to GAF’s national contractor network, GAF Energy is uniquely positioned to bring residential solar to the mass market, transforming more roofs into solar roofs each year.

“Solar roofs are the future of clean energy, and Timberline Solar is the game-changing innovation that will get us there,” said Martin DeBono, president of GAF Energy. “At GAF Energy, we have the capacity to scale this technology like no one else through GAF, bringing an integrated solar product that is weatherproof, affordable, and design-minded to homeowners across the country. We’re excited to lead the next generation of clean energy adoption.”

In September 2021, Timberline Solar achieved UL’s 7103 certification, which authorizes GAF Energy to install the system on residential roofs as a roofing and a solar energy product — making it the first of its kind to be recognized as both. In addition, GAF Energy worked with Sandia National Laboratories, a U.S. Department of Energy research and development lab, to verify the product’s strength, durability, and overall market readiness.

The Timberline Solar ES has received three awards from CES, including its highest honor, the Best of Innovation award, for “Smart Cities.” The product was also named an Innovation Award honoree in both the “Smart Cities” and “Smart Home” categories.

Beyond CES, the company received more than 20 individual awards and honors, including awards from Green Builder, TIME, Fast Company, Good Housekeeping, Popular Science, and the NAHB.

What makes these solar shingles impressive is that they can be installed in the same way as traditional roof shingles, saving both time and money on solar roof installation. This means that it takes days instead of weeks to install a GAF solar roof.

The shingles are made of a sandwich of glass, polysilicon solar cells, and a top layer of fluorinated alkane ethylene polymer. They are fire and impact-resistant and can even be walked on.

GAFs nailable tiles are also much cheaper than many alternatives, costing about half the cost of the Tesla Solar Roof. It takes around 400 square feet of the tiles to supply a six-kilowatt system — about the same amount of space as a rack-mounted solar panel system. The rest of the roof can then be filled with normal GAF shingles designed to match the solar shingles and give a neat appearance.
Time to Implement
⏱️⏱️⏱️⏱️⏱️
Cost to Implement
💰💰💰💰💰
* estimates

FOR PUBLIC OFFICIALS:
Your municipality could lead the way by embracing Timberline Solar Energy Shingles and placing them on local government-owned buildings to generate clean energy. This will also serve as a way to promote the practice among other members of your town/city, including both businesses and individuals. On the other hand, it could also help your career, promoting you as a tech-savvy, eco-friendly person in your community. And that could easily translate into your promotion or re-election. Sounds like a plan.
FOR BUSINESSES:
If you're in a construction-related business, you may want to contact GAF Energy and explore the way of bringing their fancy shingles to the cities and towns your company serves. What you could offer to local governments, businesses and individuals is rather impressive - a "normal looking" roof that doubles as an energy generator. There is no need for anyone to settle with sometimes awful-looking solar installations when they can keep a "regular look and feel" of their house/building. This doesn't sound like a tough sell, right?