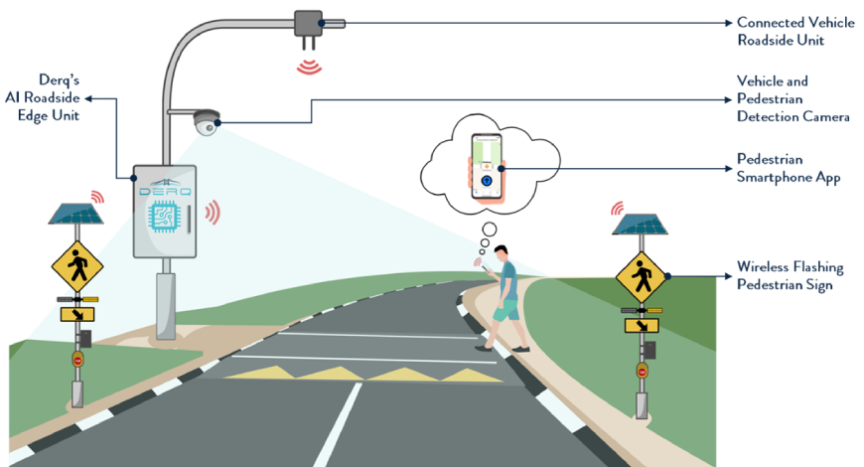 According to the National Highway Traffic Safety Administration (NHTSA), traffic fatalities are at a 16-year high, with nearly 43,000 roadway fatalities in 2021 — which has increased by 10.5% from 2020. In addition, pedestrian and cyclist fatalities are up 13% and 5%, respectively, compared to 2020.

Derq, an award-winning MIT spin-off, is looking to address burning needs in pedestrian and cyclist safety with a novel, AI-based solution. It has already been demonstrated in Florida during the first half of 2022 — in collaboration with Control Technologies, Danlaw, and CēVē.

“Over the years, we’ve partnered with various leading ITS technology providers across the US and have deployed thousands of intelligent sensor-based solutions,” said Pete Ganci, VP at Control Technologies, “the Derq AI Platform is the only one on the market that we have seen capable of powering a fully integrated pedestrian and cyclist safety solution on the market, allowing vehicles, pedestrians, and cyclists to communicate with each other and the infrastructure, while also delivering real-time adaptive traffic management and reporting advanced safety analytics, such as pedestrian compliance issues and near-miss reporting.”

The Derq solution is able to detect, track, and predict the intent of pedestrians, cyclists, and vehicles as they approach crossings in real time through its AI-powered computer vision algorithms. By fusing this detection data with data ingested from traffic signal controllers, connected car messages (C-V2X), and smartphone apps – it can generate real-time alerts and set off decisions to protect pedestrians and cyclists from hazardous conflicts with vehicles.

“Driver, pedestrian, and cyclist safety are paramount to everything we do,” said Karl Jeanbart, COO of Derq. “Our proven third-party-tested solution can be deployed immediately to alert drivers, pedestrians, and cyclists about potential hazards in their environment, avoid collisions, and save lives.”

During the mentioned demonstration in Florida, several use cases were highlighted, including:

In addition, the platform also generated an array of real-time safety and traffic insights, such as the detection of traffic violations, pedestrian compliance issues, and road-user conflict (near-miss) data — providing up-to-date, granular data to enable the analysis of safety issues.

For the demonstration, Danlaw provided its RouteLink C-V2X Roadside Unit and AutoLink C-V2X Onboard Unit for this demonstration; while CēVē chipped in with iOS and Android apps that connect drivers, pedestrians, and cyclists to transportation infrastructure. Ultra Engineering and Precision Contracting Services (PCS) also supported the technology team during the demonstration.

With the COVID-19 pandemic (hopefully) behind us, we have other problems to deal with. One of those problems is related to pedestrian and cyclist fatalities, the number of which (unfortunately) has been growing in some places around the world.

Derq, an award-winning MIT spin-off, is looking to tackle this challenge with a novel, AI-based solution. And that solution has been proven to work in a demonstration taking place in Florida during H1 2022. At that time, Derq's tech showed its ability to prevent collisions between drivers, pedestrians, and cyclists using a variety of approaches — including connected vehicle messages, flashing pedestrian signs, actuating traffic signals, and smartphone alerts. The solution also reported advanced safety insights, helping agencies better understand and improve road safety performance.

As of June 2022, Derq had more than 30 customers among local and state governments, with projects of different sizes. The company has offices in Detroit and also in Dubai.
Time to Implement
⏱️⏱️⏱️⏱️⏱️
Cost to Implement
💰💰💰💰💰
* estimates