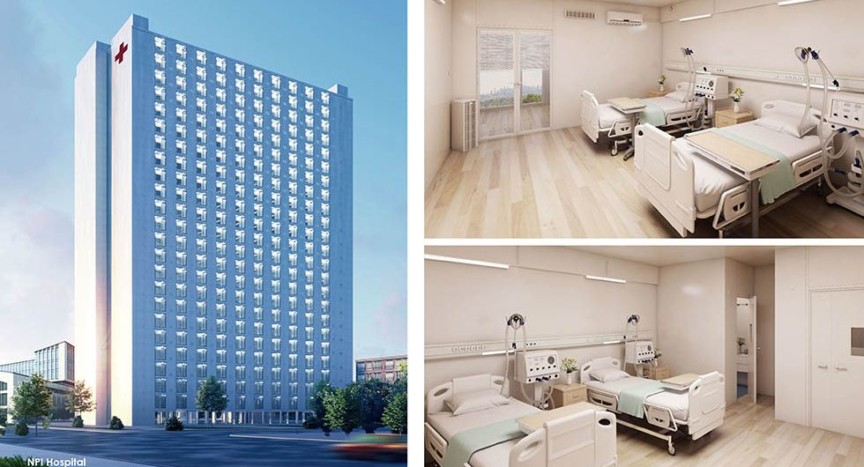 You have probably already heard about new construction methods and technologies that significantly shorten the time needed to erect a building. That’s how the Mungyeong NPI hospital in South Korea was built in just two days.

Developed and built by Broad Sustainable Building, it was transported as if it was a shipping container and then folded out to make larger spaces. The technology also minimizes the “transport of air” — beds and bathrooms are in the core, while the circulation spaces are enclosed by the 2D panels.

Seoul National University has signed the contract with BROAD Group on March 8th. The turnkey project was delivered less than 30 days after that while construction is finished in only 2 days. Once equipped with medical devices and sickbeds, the hospital was put into operation at the beginning of April.

Now you may think this hospital wasn’t built to last, but that’s not the case. It used the company’s 100% factory-prefabricated BCore CTS panels, each of which is a structural sandwich made out of two stainless steel panels separated by stainless steel tubes. According to Broad, this material is meant to “trigger a global and unprecedented lightweight structural material revolution” by significantly reducing embodied and operating energy, and being made from stainless steel. Also, it helped speed-up the building process.

Like that’s not enough – these panels are also restackable, meaning that stories of the hospital can be added later according to their requirements. And to that end, designs of the hospital’s foundation have been taken into consideration at the beginning.

Another feature of the design is its special ventilation system, which maintains negative air pressure in all of the patient rooms more (energy) efficiently than conventional systems. Called BROAD negative pressure fresh air system, it prevents cross-contamination from room to room and is thus perfectly suited for a facility designated to treat COVID-19 patients. 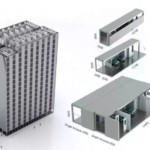 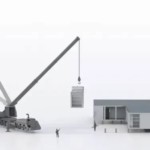 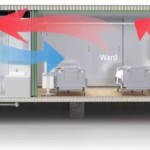 For the last few years, Broad Sustainable Building has been making waves in the construction industry. In 2016, the company made headlines for the world's fastest-built skyscraper, which 57 stories were erected in 19 working days. Now, it is applying its design and technology to tackle the coronavirus epidemic.

Broad signed a contract with Seoul National University on March 8th and delivered the fully operational building in less than a month, with construction alone taking just 2 days. The end result is a restackable hospital that could be adopted by adding new floors at a later date. Furthermore, it uses an innovative air ventilation system that ensures the contaminated air doesn't escape each room.
Time to Implement
⏱️⏱️⏱️⏱️⏱️
Cost to Implement
💰💰💰💰💰
* estimates

FOR PUBLIC OFFICIALS:
If your municipality needs a new hospital or some other building, it is advisable to use the latest construction technologies. And by embracing prefabricated building processes, you get to save both time and money. Plus, if you're an elected official, the new building could give you some extra points as it would be completed in your current mandate. Getting things done is what voters all around the world crave these days and that's what these sorts of building technologies give you.
FOR BUSINESSES:
Contact Broad Sustainable Building and ask how you could bring their technology to your area. Perhaps they can help you with building design, perhaps you could send your staff for training... The goal is the same - to offer prefabricated construction in municipalities you "cover." It will give you an edge over competing developers as you would be able to erect new buildings faster and at a fraction of the cost. Or perhaps, if you're not in the construction business, you could find a niche in project design that relies on prefabricated technologies. There's an idea...