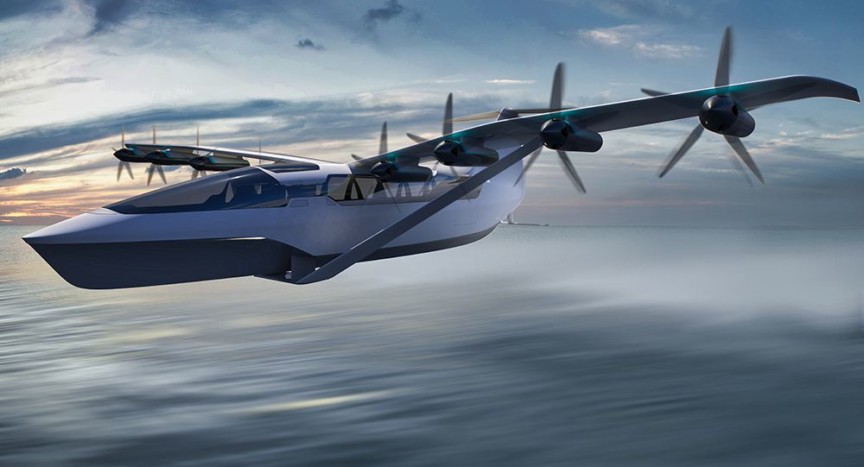 With the idea to join the upcoming transportation revolution, in April 2021 – Boston-based REGENT Craft announced the launch of its seaglider, an electric flying machine set to transport passengers along coastal routes by 2025.

REGENT’s all-electric flying machine is dubbed to combine the speed, comfort, and navigation systems of an aircraft with the convenience, maneuverability, and affordability of a boat. It will be able to transport commercial passengers and critical cargo with a range of 180 miles at a speed of 180 mph leveraging existing dock infrastructure.

REGENT’s seaglider operates in a variety of modes, enabling safe operations across a diverse set of environments. After departing a dock, the vehicle initially operates at low speeds (20-45mph) on a hydrofoil offering comfortable, wave-tolerant sailing as it leaves crowded city harbors. Upon reaching open water, the vehicle takes off and accelerates to high speeds (45 – 180 mph) staying within one wingspan of the water’s surface. Flight safety at these low altitudes is achieved utilizing a multiply-redundant, state-of-the-art navigation and control system.

Similar to a hovercraft, seagliders fly on a dynamic air cushion created by the pressurized air between the wings and the water. The aerodynamic advantage of this so-called “ground effect,” combined with operational efficiencies of always being a few feet away from a safe landing, give seagliders double the range of an electric aircraft.

According to Mr. Cuban, the efficiency of coastal transportation will be 100x greater with REGENT. “The idea of having to get between 2 coastal points is always stress inducing,” he added. “Regent changes all that and makes it fast and easy. REGENT will give people a step-change improvement in transportation. Passengers will spend less time in transit and more time with their families.”

REGENT has already received $465 million in provisional orders from some of the world’s largest airlines and ferry companies. Aircraft operators are interested because seagliders are half the operating cost of aircraft, and ferry operators are excited because the seagliders are six times faster. For all customers, REGENT enables faster door-to-door times and complete elimination of emissions.

The company’s founders, Billy Thalheimer and Mike Klinker, worked together while both studying aerospace engineering at MIT as well as during their time at Aurora Flight Sciences and Boeing.

These seagliders fly 5-30 ft above the water and replace ferries and short-haul aircraft on coastal routes. Their unique operating characteristics enable them to operate as ferries in congested waterways as well as high-speed transports on open waters. In that sense, REGENT customers have been thrilled at the prospect of offering a fast, low-cost, carbon-free replacement for their fleets thereby enabling them to meet their sustainability goals.

The company expects the first commercial passengers to fly its seaglider in 2025.
Time to Implement
⏱️⏱️⏱️⏱️⏱️
Cost to Implement
💰💰💰💰💰
* estimates

FOR PUBLIC OFFICIALS:
If you work for a municipality next to a coastline, you'll want to contact REGENT to be next in line when they start selling their seagliders. Or, if that job is reserved for a private company in your municipality, you'll want to contact them and, if needed, assist them in their effort to bring these fancy planes/boats to your community. As far as we've understood, they bring nothing but benefits. And that's what your internal marketing should be all about, helping you grow your career — while helping make your city/town a better place.
FOR BUSINESSES:
Although REGENT has yet to start selling their seagliders that doesn't stop you from contacting the company and asking them how you can join their distributors for the areas your business serves. Perhaps you could help build or create a project routes for the future fleet of seagliders or perhaps you can even serve as a middleman, making your cut from the sales. In any case, considering the benefits seagliders bring to coastal cities - this is the opportunity worth pursuing.