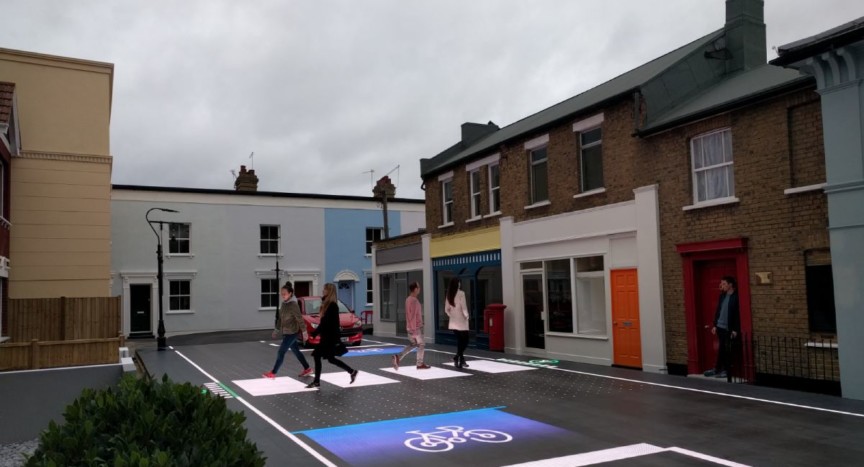 Its Starling Crossing (STigmergic Adaptive Responsive LearnING Crossing) solution, installed temporarily in South London in 2017, consists of an interactive pedestrian crossing that responds dynamically in real-time to make pedestrians, cyclists and drivers safer, and more aware of each other.

The idea, according to Umbrellium, was to reconsider pedestrian crossings in the light of shared space strategies — an urban design technique that reduces the segregation between different road users — and cutting-edge responsive technology that would put people (rather than cars) in control.

While most discussion about road technology focuses on vehicles, with the Starling Crossing – Umbrellium created a responsive road surface that puts people first by updating the design of pedestrian crossings (first introduced in the 1940s) to account for streets with more cars, pedestrians and technology, and a different societal relationship to urban transport infrastructure.

Although it uses familiar and understandable road markings and colors, the Starling Crossing reacts dynamically in real-time to different conditions and is able to modify the patterns, layout, configuration, size and orientation of pedestrian crossings in order to prioritise pedestrian safety. The entire road surface at the crossing area is monitored by cameras and embedded with computer-controlled LEDs that can be seen from all angles, during both day and night.

The full-scale prototype that was installed temporarily in South London was designed to support the weight of vehicles, remain slip-free in pouring rain and to display markings bright enough to be seen during daytime.

It used Umbrellium’s Starling CV product, consisting of a neural network framework-enabled cameras to track objects moving across the road surface. The system was able to distinguish between pedestrians, cyclists and vehicles — calculating their precise locations, trajectories and velocities and anticipating where they may move to in the next moment.

At different times of day, and in different situations, the road can alter its configuration in real-time.

Early in the morning when there are few pedestrians, the Starling Crossing may only appear when someone approaches, guiding them to the crossing location that it has learned over time is the safest, leaving the road otherwise free for vehicular traffic.

Later in the day, when pubs close or a film ends and many people need to cross the road at the same time, the Starling Crossing automatically expands in width to accommodate increased pedestrian traffic.

If a person is distracted, looking down at their phone, and veers too close to the road surface when a car is nearby, a warning pattern lights around them to fill their field of vision. If a child runs into the road unexpectedly, a large buffer zone is created around them to make their trajectory clear to any nearby drivers or cyclists.

In a particularly dangerous situation, when a pedestrian is rushing across the street but is in a cyclist’s or driver’s blindspot, the Starling Crossing adapts in the real-time to draw their attention directly to the hidden pedestrian’s location and trajectory.

Furthermore, if most people exiting a tube station end up walking diagonally across the road towards a park entrance, the crossing is able to reconfigure as a diagonal or even trapezoidal crossing, with corresponding safety buffer zones.

The Starling Crossing was commissioned by the insurance company Direct Line with the ad agency Saatchi & Saatchi. It wasn’t a permanent installation, though. 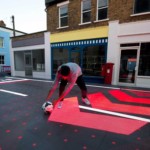 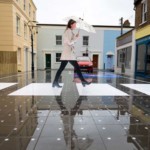 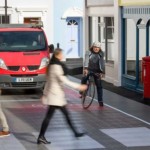 Umbrellium's Starling Crossing is a modern, high-tech pedestrian crossing that puts people first, enabling them to cross safely the way they want to cross, rather than one that tells them they can only cross in one place or a fixed way. Key design principles include aiming to enhance people's perceptual awareness without distracting them, and highlighting safety relationships between people and cars so they can make their own decisions, rather than telling them what to do.

The solution is obviously more expensive than a traditional pedestrian crossing, but also much safer for all parties included in the traffic — making it suitable for city areas with the highest density of pedestrians such as main city squares.
Time to Implement
⏱️⏱️⏱️⏱️⏱️
Cost to Implement
💰💰💰💰💰
* estimates

FOR PUBLIC OFFICIALS:
A local government official could sell the idea of a smart, high-tech pedestrian crossing that improves the "safety relationships between people, cyclists and vehicles," while also helping the city generate information (data) about the site’s pavement and road usage. This further paves the way for pedestrian and vehicular flow analysis and prediction that could lead to dynamic pavement zoning plans. On the other hand, it also shows the city as a modern place that is willing to embrace new technologies.
FOR BUSINESSES:
A company could contact Umbrellium to bring its high-tech pedestrian crossing to another city. It doesn't have to be a temporary installation — though it could be made for some special events — but a permanent one that would be installed in the city center and/or at other places with many pedestrians (i.e. main city squares). To the local government, Starling Crossing would be pitched as a novel idea that improves safety of all parties — including pedestrians, cyclists and cars.