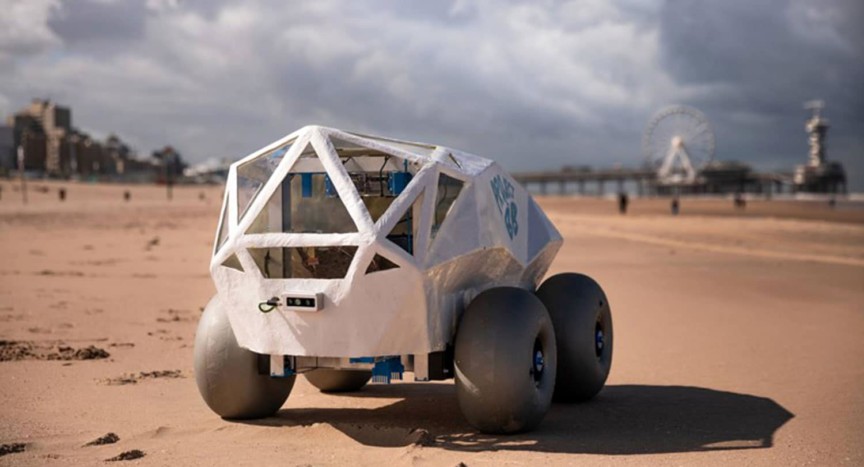 Cleaning is one of the tasks for which we already use robots. There are vacuuming robots in many houses today and also robotic lawn mowers. Beyond these home appliances, we are also seeing new robots that are made for more “serious work” to serve entire municipalities rather than individual homes.

One such robot, called BeachBot or BB, is designed to pick up cigarette butts on beaches. Designed by two Dutch engineers, Edwin Bos and Martijn Lukaart of TechTics, it looks like a moon rover with added arms to pick up those nasty butts.

Why cigarette butts, you ask? For one thing they look ugly on the beach; and second – they contain microplastics and chemicals harmful to fish and other sea creatures.

Specs wise, Beachbot is 2.5-feet (80 cm) wide, has puffy tires that won’t leave tire prints on the sand, and the pair of grasping arms to pick up those toxic butts on the beachfront.

Its key selling point, however, is the AI-enabled software that uses 2 cameras and relies on image-processing algorithms to discern a cigarette butt from people and other beach equipment like flip-flops, towels, and larger chunks of trash.

BeachBot then scoops the cigarette butts up from the sand and disposes of them in an internal bin. Later, people empty that bin into a trash container.

As of July 2021, BeachBot’s brain is learning to discern butts of all shapes, sizes, and forms using the Microsoft Trove app. The app connects AI developers with photos sent by contributors to feed the system with images of cigarette butts stuck in the sand. In the future, it may be expanded to scoop up other pieces of trash, as well.

The company is looking to amass upwards of 2,000 images and will pay contributors for their entries.

It is also worth pointing out that BeachBot doesn’t do all the work alone. Rather, it has a trove of more miniature robots that are meant to map or scan the beach for cigarette butts before BB goes to work.

BeachBot made its debut at the World Cleanup Day at Scheveningen Beach, when it managed to clean up ten butts in half an hour. That’s rather slow, but it’s only the start as BB is expected to speed up as it learns. Also, in theory, it can work 24/7 taking the rest only when its battery needs to be charged — after which the beach sweeping can continue.

Martijn Lukaart and Edwin Bos, two Dutch engineers and founders of TechTics, have built a mobile, beach-cleaning machine called BeachBot that can spot cigarette butts, pluck them out and dispose of them in a safe bin.

BeachBot uses artificial intelligence to learn how to better find the strewn filters, even if they're partially buried in the sand. It then scoops these cigarette butts up from the sand and disposes of them in an internal bin. Later, people empty that bin into a trash container.

Rolling atop the sand on four puffy-looking wheels, the beach-cleaning robot uses two onboard cameras to look ahead (to avoid people and objects) and to look down.

The BeachBot is still in early learning via Microsoft's Trove AI system, which helps provide image sets for this kind of machine learning task. Nevertheless, it has already been tested at Scheveningen Beach in the Netherlands.
Time to Implement
⏱️⏱️⏱️⏱️⏱️
Cost to Implement
💰💰💰💰💰
* estimates

FOR PUBLIC OFFICIALS:
If your municipality has a beachfront, you are probably struggling to keep it clean. Chances are there is staff (or a company) engaged for this purpose, but at some point in the future - chances are, robots will be doing all this work. Perhaps your city/town could be a pioneer and be among the first ones to adopt new technologies. That could make your municipality look much cooler in the eyes of the tech-savvy folks who may consider moving and consequently bringing their businesses to the area. That's more taxes down the road and more love for the person behind such an initiative.
FOR BUSINESSES:
If you're already doing business with municipalities that have a beachfront, you may want to explore their willingness to adopt the latest technologies and at some point in the (near) future, procure a robot for keeping their beaches clean. To that end, you can start by contacting BeachBot and see how you can bring their fancy cleaning bots to the cities and towns your company serves. What you would end up selling is a high-tech solution that will not only clean the beach, but will also promote the municipality as a place that is willing to embrace novelties. And that further makes it more interesting to other people to move into the area.