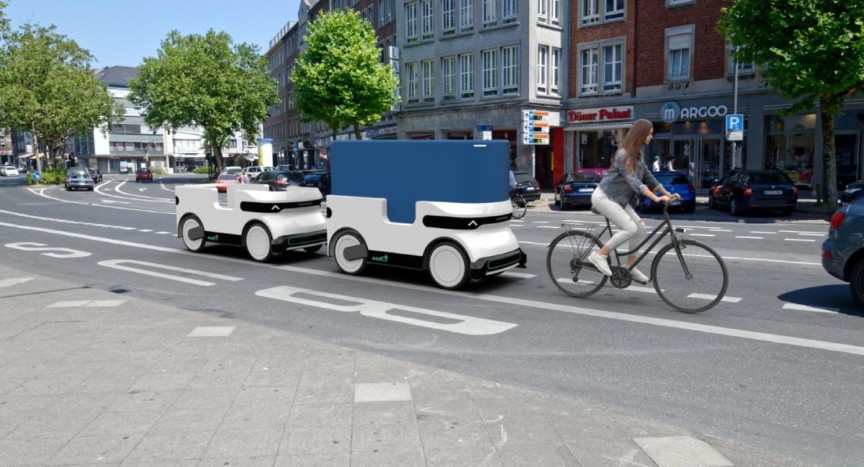 Cargo bicycles may indeed be a green option for making urban deliveries, but they can only carry moderately sized loads. This novel self-powered cargo trailer lets bikes haul much more cargo, by matching its power and steering to that of the bike that’s towing it.

Manufactured by German startup DroidDrive, the Trailerduck is an electric-motorized four-wheeled cargo trailer that is connected to a bicycle via a system-specific drawbar. That bar contains sensors that detect the speed of the bike, along with the direction in which it’s turning. The trailer responds by accelerating, braking and turning accordingly.

Although the cyclist is guiding the Trailerduck, they don’t have to work at actually pulling its weight along behind them. That’s an important consideration since the 1-meter wide (3.3 ft) trailer can handle a payload of up to 300 kg (661 lbs). Nevertheless, its size makes it small enough to be used both on main roadways and in bike lanes. So, it’s essentially a bigger, stronger equivalent of some consumer-oriented bike trailers.

As of the end of August 2021, DroidDrive has been taking preorders for the Trailerduck, with shipping of the first units expected to start in the fourth quarter of next year. They will also be available to rent, for €499 (about $587) per month.

But wait, there’s more. The company is also developing what it calls the Ducktrain system that consists of up to five Duck electric cargo vehicles (similar to the Trailerduck) — which use LiDAR technology to wirelessly track and follow a lead human-driven vehicle such as a cargo bike. This means that although the lead vehicle and the Ducks form a train, none of them are physically linked to one another.

What’s more, it is hoped that within about three years, the Ducks will be able to travel at least part of their delivery routes autonomously, without the need for a guiding vehicle in front. According to the company, the Ducks are already physically ready to perform this function, and would simply require a software update. 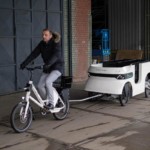 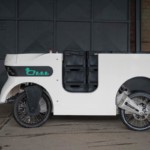 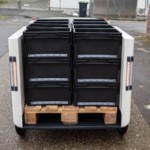 The German company called DroidDrive is developing Trailerduck, an electrically driven four-wheeled cargo trailer that lets bikes haul much more cargo. The self-propelled, motorized trailer attaches to an e-bike or trike, using a specially-designed drawbar, and boasts the biggest payload in the industry. The drawbar is packed with sensors that detect the speed of the bike, along with the direction in which it's turning. The trailer takes its cues from the towing vehicle and autonomously performs all maneuvers — from accelerating, braking, maintaining speeds to turning. That literally means the cyclist will be riding like they have no trailer attached.

Thanks to innovative lightweight construction, Trailerduck can handle a payload of up to 300 kg, has a loading volume of up to 2 cubic meters, and can reach speeds of up to 25 km/h (15.5 mph). Additionally, because it is electric and technically a part of the bike, it will be able to travel across all car-free city centers, where delivery vans are no longer allowed.

DroidDrive is currently taking preorders for the Trailerduck, with deliveries for the first units estimated for late 2022.
Time to Implement
⏱️⏱️⏱️⏱️⏱️
Cost to Implement
💰💰💰💰💰
* estimates

FOR PUBLIC OFFICIALS:
Although the (local) government shouldn't interfere with the (free) market, there is a case to be made for procuring at least one Trailerduck unit once it hits the market. Your municipality should not be in the mail delivery business, but it could use such a fancy trailer for its own paper communication or for moving packages from one building to the other. Or you may want to partner with the local post office for the effort. Moving mail and packages with Trailerduck is not only more efficient but also promotes innovation and green technologies. At the very least, such an endeavor could help make mail deliveries greener in some communities, prompting others to procure Trailerducks as well.
FOR BUSINESSES:
If you think your clients could benefit from green transportation of mail and packages, consider contacting DroidDrive and explore the option of selling their Trailerducks in communities your business serves. Aside from obvious clients like couriers, this kind of an electric vehicle may also be beneficial to other parties which need a more efficient (and greener) way of moving stuff from one place to the other. This isn't a truck, mind you, but could be able to easily ship packages around the city. And considering its electric credentials, Trailerducks may prove as an easy sell.