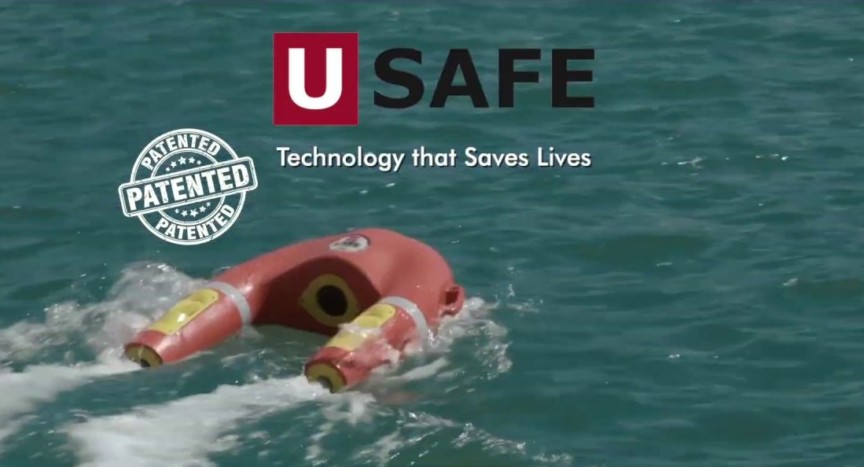 Portugal-based Noras Performance is the company behind U SAFE, a lifesaving buoy that can drive itself around in the water by remote control, meaning it can reach a victim quickly and transport them to safety if need be.

The U-shaped device is battery-powered and can be used in place of any lifesaving “donut.” When it’s thrown in the water, it propels itself using a pair of electric turbines (one in each leg) that take in water and fire it out the back.

U SAFE is resistant to waves and doesn’t require any specific instructions to use, according to Miguel Paulo, director of manufacturing at Noras Performance. “It starts to work immediately after it enters the water. The device lets the person being rescued rest and doesn’t put anyone else in danger,” he said.

The included remote control thumbstick gives an operator the ability to drive it as a small watercraft. This, as far as we can tell, is the quickest way to get a piece of lifesaving gear out to a distressed person in the water, particularly in difficult surf.

Once a victim has been reached, the U SAFE has enough power to help drag them back toward safety — which could make it very handy on large ships that might have to launch a rescue boat otherwise.

Noras Performance has also secured a patent for this device, and has even envisioned some future model that could be able to charge itself through solar power, or that might automatically self-deploy and self-drive to the location of a crew member who’s gone overboard with a special GPS locating device on that person.

So far this versatile buoy has been tested in Saudi Arabia, Turkey (Istanbul) and Norway, among other places.

Portuguese company Noras Performance developed U SAFE, a lifesaving buoy that can drive itself around in the water by remote control. It features a U-shaped hull, powered through the water by an electric turbine in each leg.

So far, it has been tested in Saudi Arabia, Turkey (Istanbul) and Norway, among other places.
Time to Implement
⏱️⏱️⏱️⏱️⏱️
Cost to Implement
💰💰💰💰💰
* estimates

FOR PUBLIC OFFICIALS:
It makes sense to procure U SAFE if your municipality is near water where many people come to swim. Saving a single life is enough to pay off the cost of the device. And that's just a start with such a purchase also potentially getting you some (political) points for thinking about public safety. Plus, since we are talking about a high-tech device here, it will also show your city/town as a place that is willing to adopt new technologies and that could help bring in more people and businesses to your area.
FOR BUSINESSES:
Although U SAFE is already available in many countries around the world, they are still inviting interested companies to sign-up as distributors. If your company is doing business with municipalities next to a lake, big river, sea or ocean - this could be your chance. Instead of selling the local government the high-tech gadget, sell them the safety of their citizens when they come for a swim. This way it will also be easier for local officials who have to sell the idea of U SAFE to their constituents.