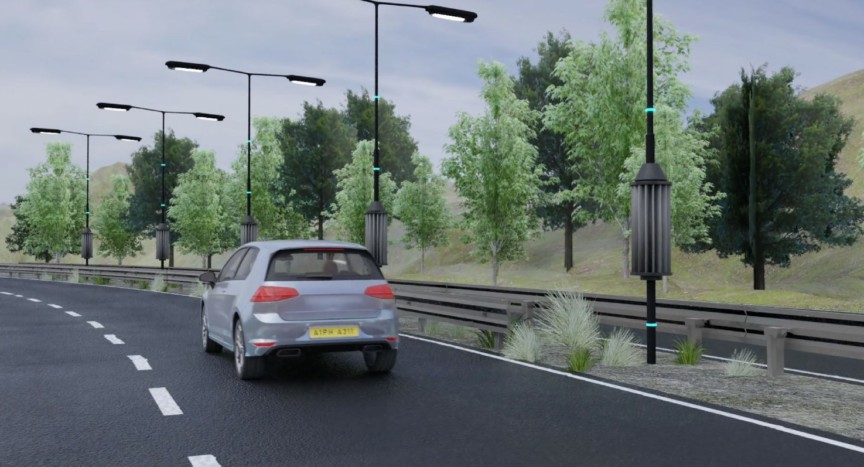 You probably know the experience of standing on the side of the road only to feel a gust of wind hitting you in the face.

Barry Thompson, a Kent, UK-based businessman, has created a cylindrical turbine device that is attached to motorway lamp posts and is able to harness that wind produced by moving vehicles. It is described as a retro-fit solution, designed to be attached to the existing infrastructure.

The small wind turbines, which could initially power the lights they are attached to, have the potential to help countries reach their target of being carbon neutral by 2050 by harnessing the massive, untapped energy of wind generated by vehicles every day. Eventually though, if placed across many roads, these small turbines could generate enough energy to sell back to the grid.

Each turbine, built by Thomson’s company Alpha 311, is two meters tall and currently costs £20,000 to make (around $26,000), generating the same amount of energy as 21m2 (226 square feet) of solar panels. Down the road, they hope to make these turbines both smaller and more efficient.

The main idea is solid, with cars and trucks not going away anytime soon, so “let’s make them work for the environment and for local communities” — as explained by Alpha 311.

As of September 2020, the company was talking with a few cities in the UK and US to test the technology, with several trials already taking place.

Kent-based businessman Barry Thompson and his company Alpha 311 have developed a new type of wind turbines that are attached to existing lighting columns close to roads and are powered by massive, untapped energy produced by moving vehicles.

This way, energy can be produced even when there's no wind, with cars passing by constantly rotating turbines on a busy road. These unusual-looking devices could initially be used to power the lights they are attached to and eventually help countries reach their target of being carbon neutral by harnessing the enormous amounts of wind generated by vehicles every day.

Each turbine built by the company is two meters high and currently costs around $26,000 to build, generating as much energy as 21 square meters of solar panels.
Time to Implement
⏱️⏱️⏱️⏱️⏱️
Cost to Implement
💰💰💰💰💰
* estimates

FOR PUBLIC OFFICIALS:
It makes sense for local authorities to procure Alpha 311's wind turbines as they don't occupy extra real estate and could be placed on the existing infrastructure. The initial investment could easily be recouped by the lower cost of street lights with all extra electricity returning back to the grid. Also, such installation(s) send a strong green message to your constituents, showing them that you're into modern, green technologies — which also happen to make the air that much better in your area. That's an instant win, as far as we can tell.
FOR BUSINESSES:
Contact Alpha 311 and explore the option of selling and implementing their wind farms in municipalities your business serves. Considering the benefits included — tapping the previously unused source of energy to produce electricity — this should be an easy sell. Sure, the initial investment can be hefty, but with some financing options and reduced bills for street lights, it could easily be recouped within a year or so.