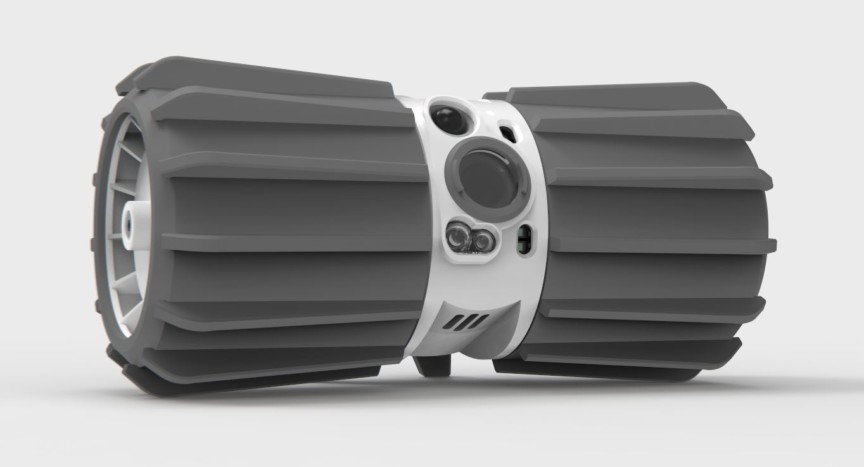 Company Six (also known as CO6), is a spinoff of Colorado-based programmable robot maker Sphero, created to commercialize robots and AI-based apps for military, EMT, fire personnel and others who work in challenging situations. In November 2020, it announced its very first product – a throwable robot, called ReadySight, built for “dangerous and difficult” jobs.

According to CO6, ReadySight streams video over dedicated first responder and commercial LTE networks. Controlled by a smartphone, it allows for “day and zero light usage,” while also enabling autonomous and semi-autonomous driving and patrolling modes, two-way audio communication, and unlimited range and usage over cellular networks.

The robot has a built-in speaker and microphone, a foldable “tail,” and a time-of-flight distance sensor. Said camera relies on Sony’s sensor with a 120-degree wide-angle lens, a lens shield and a motion sensor paired with a front indicator LED. It also has high-torque motors that are powerful enough to tackle multiple terrain types and obstacles.

CO6 envisions ReadySight being deployed in the course of accident investigation, exploring tight or unknown spaces before someone enters, and acting as a sentry to keep eyes on critical areas like crime scenes. The device is expected to ship in Q3 2021.

ReadySight is built to run over LTE cellular networks, with the ability to connect to national first responder and public safety networks, as well as commercial networks. It delivers HD video streams directly from the robot to the secure cloud servers, providing first responders information they need to react safely.

ReadySight is expected to ship in Q3 2021 when it will be available starting from $99 per month.
Time to Implement
⏱️⏱️⏱️⏱️⏱️
Cost to Implement
💰💰💰💰💰
* estimates

FOR PUBLIC OFFICIALS:
Procuring ReadySight for your municipality's fire department is one of those things you shouldn't skimp on. We are talking about a savvy little robot that could provide people who save lives with eyes on the ground in situations where such an option is not possible without risk. In that sense, CO6's subscription of $149 per month is a bargain considering that it could help first responders stay safe while they're literally on the line of fire. As such, these robots could also help the career of the person promoting the idea of their procurement in the first place.
FOR BUSINESSES:
CO6 is still a relatively new venture and chances are they are looking for distributors. This could be a chance for your company, which could help them increase their sales while at the same time getting you a cut of every robot sold. You should also explore the option of getting a cut of the monthly subscription — cause that's where the real money is. Then you can start promoting this savvy robot to the communities your business serve, touting it as the firemen's next best friend. There's an idea. ;)