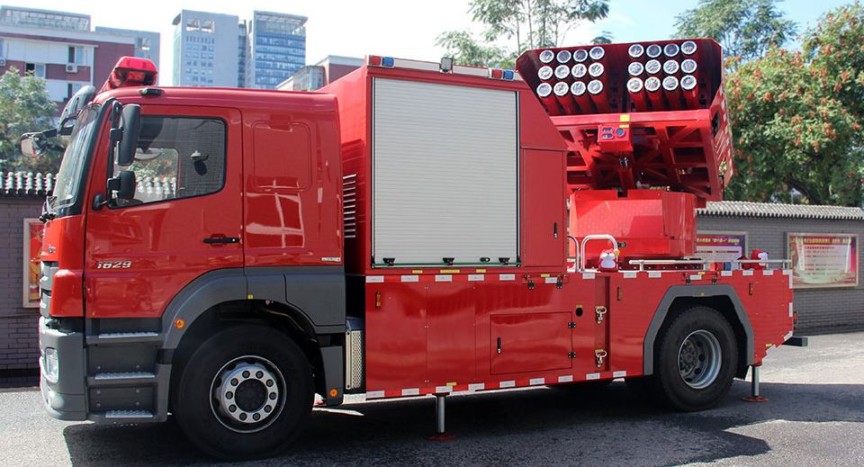 Current fire mitigation systems, which include things like sprinkles and fire curtains, may get the job done in most cases — but that doesn’t mean there is no room for improvement.

The China Aerospace Science and Industry thinks fighting fire in skyscrapers demands a new kind of tool and so it adopted military technology to create a novel solution that is used to literally fight fire with fire.

Originally developed back in 2015, the Fire Extinguishing Rocket System also happens to be a Multiple Rocket Launch System (MRLS)-based system that can carry and fire multiple missiles as the situation demands. As such, the system resolves the problems of “can’t enter”, “can’t deploy” and “can’t operate” faced by conventional fire-fighting systems when situated with a high-rise building fire.

Each rocket is designed to break through windows to get inside the building and disperse 3.6 kilograms (7.9 lbs) of fire extinguishing agents (a form of dry powder) to suppress the fire — which is reportedly enough to cover a room of up to 60 cubic meters (2,119 cubic feet).

The rockets can hit targets up to 300 meters (984 feet) or about 80 stories high and are capable of smashing through a 19 mm (0.75-inch) thick glass, even when they are launched from hundreds of meters away.

Just like military-grade MLRS, this one also uses infrared and laser sensors to pinpoint the target while the launch system’s computer crunches the data to determine the trajectory before sending the rocket on its way. Furthermore, it is also a fast system and can unleash the entire salvo of 24 rockets in 72 seconds.

In the event that the rocket deviates from the set course, a control system will guide the said rocket to descend safely to the ground — presumably without triggering the fire extinguishing agents.

Hujialou Fire Squadron in Chaoyang district in Beijing was the first fire department to receive this fire fighting vehicle in 2017. Prior to that, a chemical producer in Shandong province has also adopted such a firefighting vehicle.

The price of each unit, with a launcher and rockets, costs about 8.5 million yuan ($1.24 million).

Besides high-rise buildings, the Fire Extinguishing Rocket System is also applicable to fight forest fires by launching the fire extinguishing bombs from a safe distance.

Fighting fire in skyscrapers is very different than doing the same in smaller buildings. And so the China Aerospace Science and Industry has developed the Fire Extinguishing Rocket System that uses rockets equipped with fire extinguishing agents to suppress the fire.

The system is smart enough to locate the fire site precisely by using infrared and visible light detection technology, and employs high-accuracy trajectory calculation technology to measure and set fire-fighting parameters. It can also fire a round of 24 rockets in 72 seconds and can be quickly reloaded.

FOR PUBLIC OFFICIALS:
The Fire Extinguishing Rocket System is made for municipalities that can afford it and which also have enough skyscrapers to protect against fires. If you work in such a city, you could consider procuring one of these. And if the price is the issue, perhaps you could explore a partnership with insurance companies that are providing insurance to owners and/or operators of high-rise buildings in your area. Together, you should be able to come with funds to get one of these fancy rocket launchers. Once bought, it could get you some (political) points and help your career down the road.
FOR BUSINESSES:
If your business already serves — or hopes to serve — municipalities with a lot of high-rise buildings, you could contact the China Aerospace Science and Industry to explore a distribution deal. And if everything goes as planned, you'll end up with a fat commission from the local government's procurement of these fancy rocket launchers while also knowing you did the right thing for the community. Protecting people and property is a noble cause and if you can make some money along the way — it's that much better. Just prepare a ton of marketing material to convince local government officials why they need the Fire Extinguishing Rocket System.