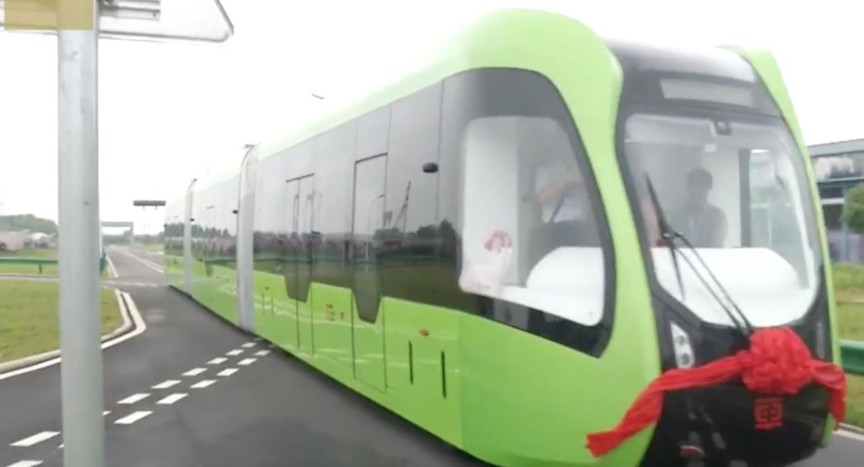 Launched in June 2017 by CRRC Zhuzhou Institute, the Autonomous Rail Rapid Transit (ART) system uses onboard sensors to run along a virtual track, which in turn cancels the need to lay real tracks — dramatically reducing construction time and costs compared with other rail transit systems.

The debut train system has three carriages with a total length of 31.64 meters, width of 2.65 meters and height of 3.4 meters. Each can carry around 300 passengers. The maximum operating speed is 70 kilometers per hour (~ 43 mph), running on rubber tires.

The virtual rail system provides cities with a more economical option for building public transit systems — these virtual trams are said to cost around one fifth the price of railed trams. Furthermore, the estimated life span of the virtual rail train is 25 years, which is around four times that of new energy buses.

The train system has the flexibility to compensate for its length. Its turning radius is comparable to that of a regular bus, allowing it to travel on most city roads. The train also employs the double-head feature used on modern commuter trains, eliminating the need for U-turns.

While it is an autonomous system, in most cases the virtual trams will run with a driver for safety. However, it has been equipped with a Lane Departure Warning System and a Collision Warning System for support to keep a safe distance from other vehicles on the road.

The virtual tram had its first ride in Zhuzhou, Hunan Province in China, followed by rollouts in Yonhxiu, Jaingix province and Yibin, Sichuan province.

So far, more than 100 cities across the world have taken an interest in the virtual rail transit system. One of those expressing interest was Doha, Qatar — which has started testing it in July 2019, with plans to have its public transportation improved and ready for the FIFA World Cup 2022.

Traffic congestion is a problem in many cities around the world. However, not all cities have the money to dig metro/subway tunnels and/or even lay down tracks for light metro systems or trams.

The Autonomous Rail Rapid Transit offers a viable alternative that is more affordable and easier to implement, relying on regular city roads rather than brand new tracks to operate. As such, it is ideal for budget-strapped municipalities as well as for better-off cities that want to further expand their public transportation network.
Time to Implement
⏱️⏱️⏱️⏱️⏱️
Cost to Implement
💰💰💰💰💰
* estimates

FOR PUBLIC OFFICIALS:
Compared to regular trams, the Autonomous Rail Rapid Transit is easier, more affordable and quicker to deploy. This leaves room for savvy public officials to score points during their tenure in the (local) administration by procuring these tram-like vehicles (that are also green).
FOR BUSINESSES:
A company could create a project involving CRRC's Autonomous Rail Rapid Transit system to help solve multiple problems such as congestion and pollution in densely populated cities. The system would be pitched as sustainable, offering benefits that are similar to the regular tram at a fraction of the cost.