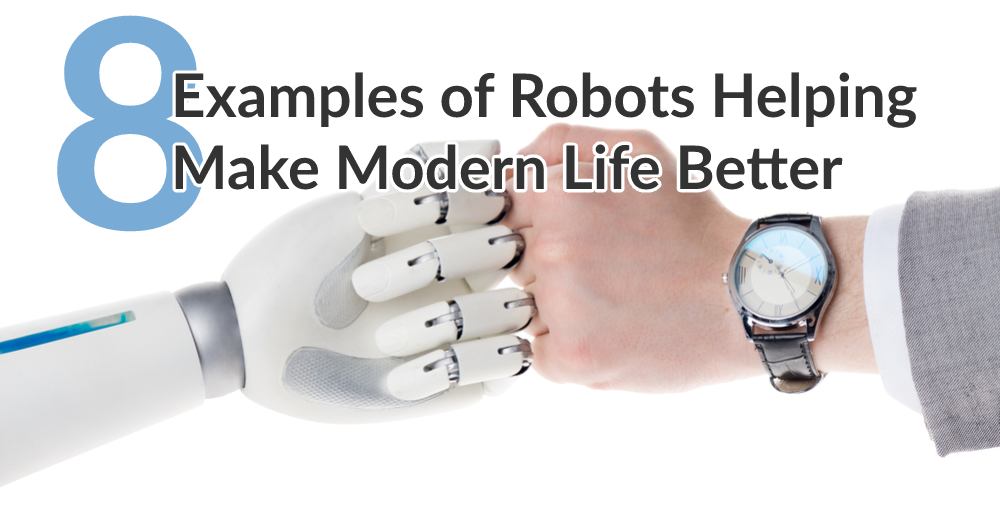 What is the first thing that comes to your mind when someone says “robot?” Is it a scene from the movie Terminator? Or perhaps a robot puppy Sony used to sell?

Like it or not robots are coming, but fear not – they are not here to destroy us, but to help us thrive. Or at least, perform many tasks with ease.

Here are some innovative ways how robots assist people in different tasks:

Imagine airport parking… Now think how much space it occupies, yet somehow, we always struggle to find a free spot to park the car. 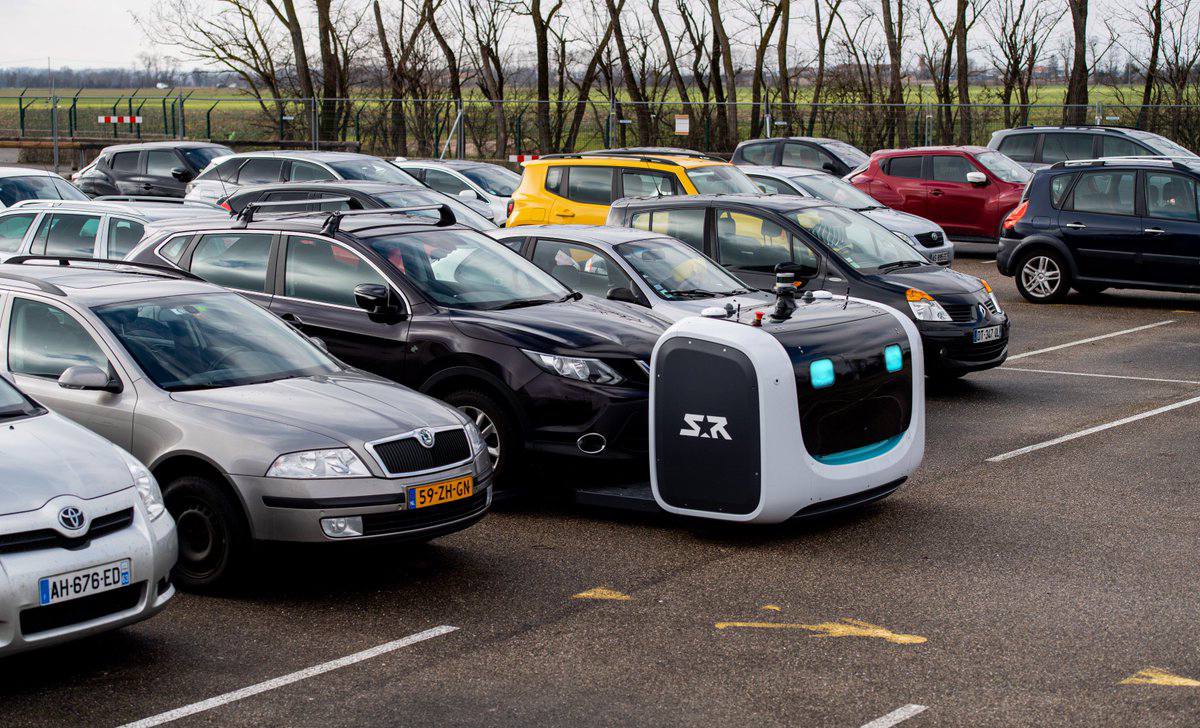 Stanley Robotics has a solution for this conundrum, consisting of fully autonomous robots and intelligent storage management software. Said robots can take and move any car, lifting them by the wheels and block-parking them much closer together without risking dings and dents. As a result, Stanley Robotics’ system can arrange up to 50% more vehicles within a given area. And because they are able to operate in existing car parks, no new parking infrastructure is needed.

The company’s value proposition is simple – the ability to optimize vehicle storage management by storing cars in blocks – and unsurprisingly, it has managed to score a few airports to test its technology, including the Paris-Charles De Gaulle, Lyon Saint-Exupéry and Gatwick Airports.

The robotic dog called Spot (or Dr. Spot) is capable of measuring users’ vital signs from a distance of 2 meters, making it suitable for pandemics. It can move at a speed of up to 3 mph (4.8 km/h), and comes with a rechargeable and interchangeable battery with a range of 90 minutes. 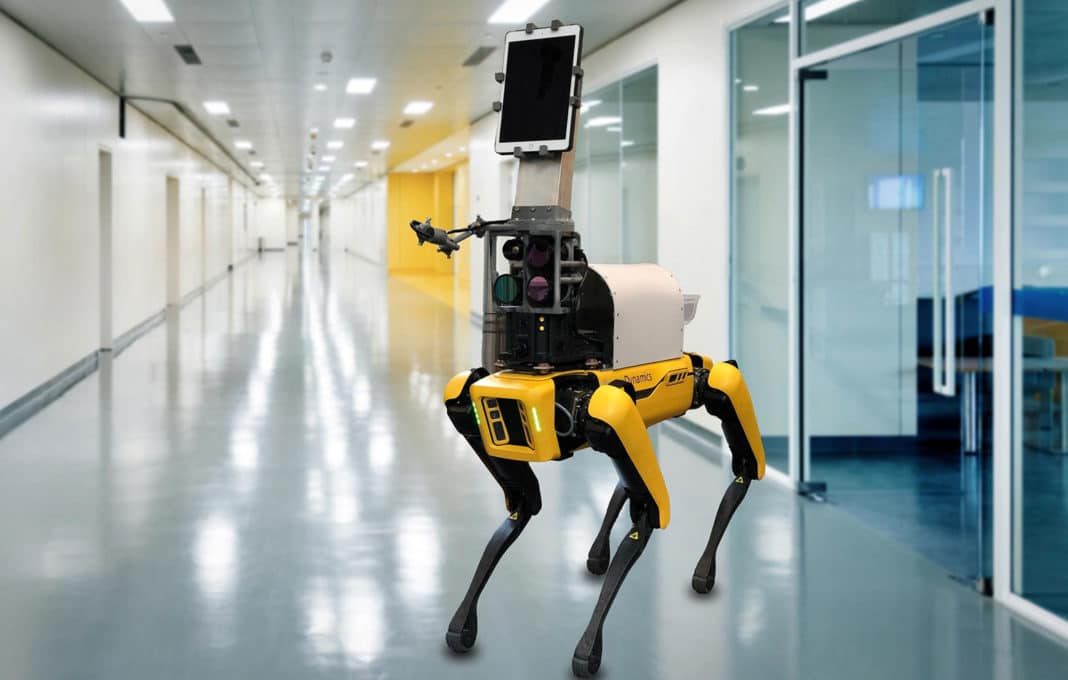 Manufactured by Boston Dynamics, it has been available for purchase since September 2019 but it was during the COVID-19 outbreak when it got into the spotlight.

Specifically, Dr. Spot was put to good use by researchers from MIT and Brigham and Women’s Hospital who wanted to test the robot to monitor vital signs of potentially infectious patients, allowing healthcare workers to minimize their exposure to the Coronavirus.

Shark Robotics’ Colossus is a robust fire-fighting robot developed with the help of Paris firemen, the Brigade de Sapeurs-Pompiers. This multi-purpose support robot was made for operations in high-risk areas and has already proven its worth, having helped extinguish the ferocious Notre Dame blaze that occurred on April 15, 2019. At that time, it enabled almost 3,000 liters of water to be sprayed per minute onto the inside walls of the cathedral, without endangering a single human life. 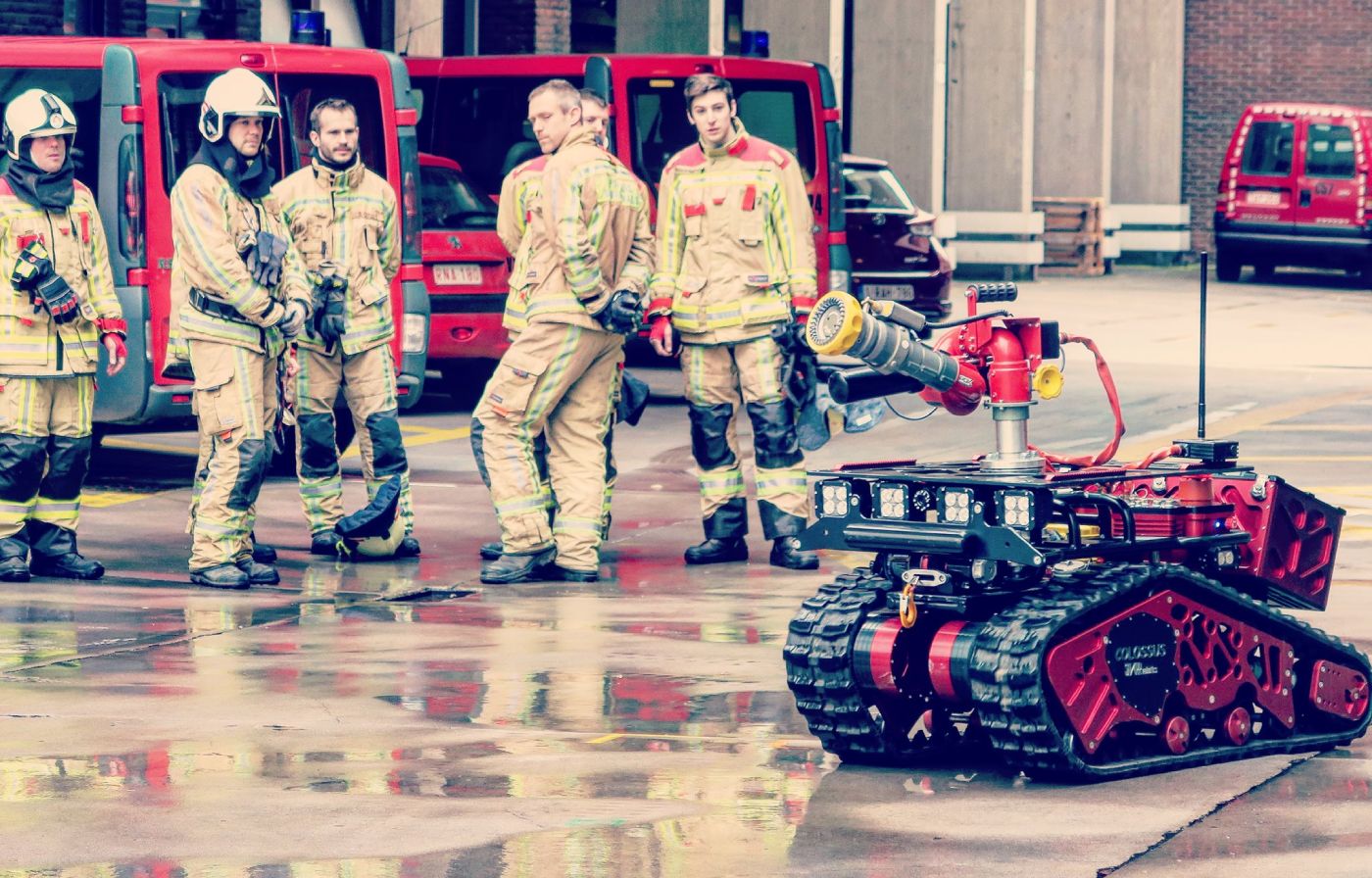 While it may seem small in size – though it looks like a tank with an enormous hose in place of a gun – Colossus manages to live up to its name. Considered to be “the most powerful electric robot in the world,” it is amazingly resistant to thermal radiation (up to 900°C), and can run up to 12 hours in an operational situation with a carrying capacity of up to 500 Kg.

Colossus’ integration is also impressive. In less than 30 seconds, its functions can be changed by a single operator without the use of any special tool. Also, the Colossus is easy to use, a low-maintenance robot that can be set up quickly for action.

Portugal-based Noras Performance is the company behind U SAFE, a lifesaving buoy that can drive itself around in the water by remote control, meaning it can reach a victim quickly and transport them to safety if need be. 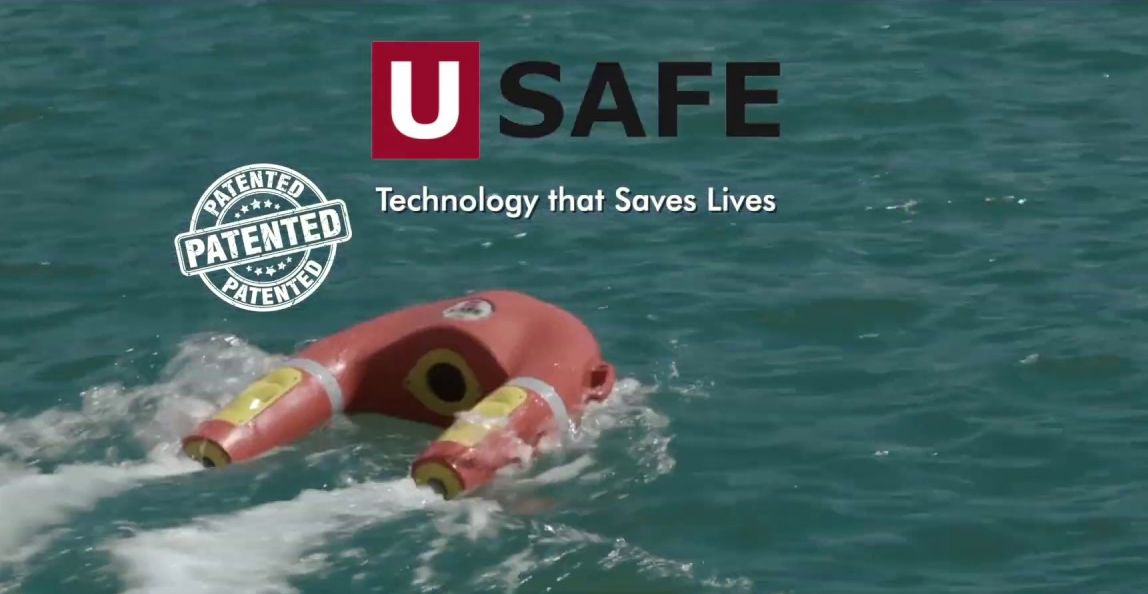 The U-shaped device is battery-powered and can be used in place of any lifesaving “donut.” When it’s thrown in the water, it propels itself using a pair of electric turbines (one in each leg) that take in water and fire it out the back.

U SAFE is resistant to waves and doesn’t require any specific instructions to use, according to Miguel Paulo, director of manufacturing at Noras Performance. “It starts to work immediately after it enters the water. The device lets the person being rescued rest and doesn’t put anyone else in danger,” he said.

The included remote control thumbstick gives an operator the ability to drive it as a small watercraft. This, as far as we can tell, is the quickest way to get a piece of lifesaving gear out to a distressed person in the water, particularly in difficult surf.

In October 2020, the Automatic Brick Laying Robot (ABLR) has started building a three-bedroom house in East Yorkshire’s Everingham. The developers described it as the UK’s first house built by a robot bricklayer rather than human laborers. 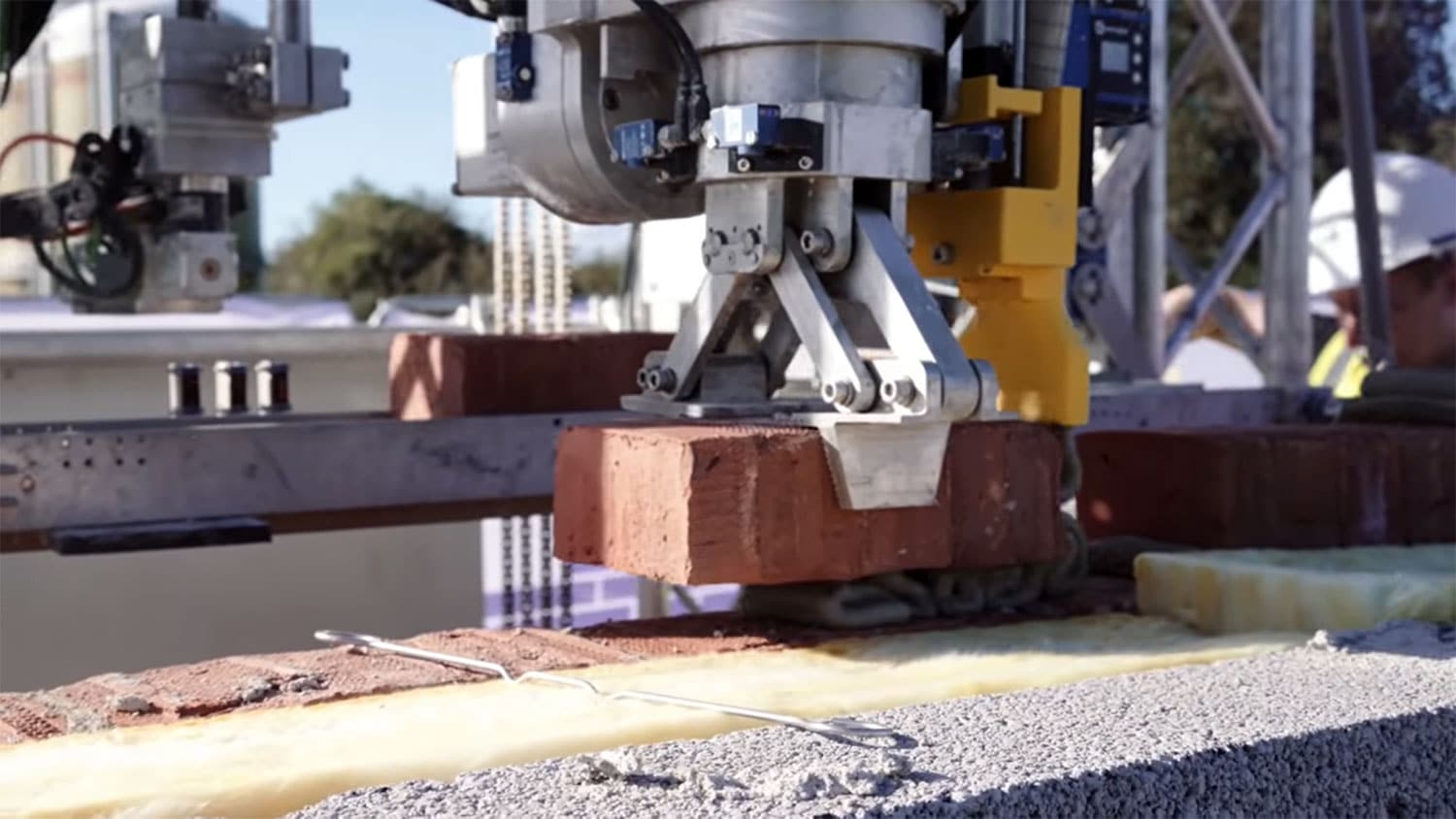 Manufactured by Pocklington, UK-based Construction Automation Company, the Brick Laying Robot is being put into operation at a construction site to replace people, ensure safety and health.

The machine is mounted on a track a rides atop a 30 foot (9 meters) high frame, eliminating the need for scaffolding and for people to work at height. It needs two workers to control it, load bricks and mortar into its feeds, and also to complete damp-proofing and the pointing that finishes the mortar joints.

The system is controlled by a tablet-based user interface and employs a “sophisticated software control system” that allows it to read digital copies of architectural plans.

Company Six (also known as CO6), is a spinoff of Colorado-based programmable robot maker Sphero, created to commercialize robots and AI-based apps for military, EMT, fire personnel and others who work in challenging situations. In November 2020, it announced its very first product – a throwable robot, called ReadySight, built for “dangerous and difficult” jobs. 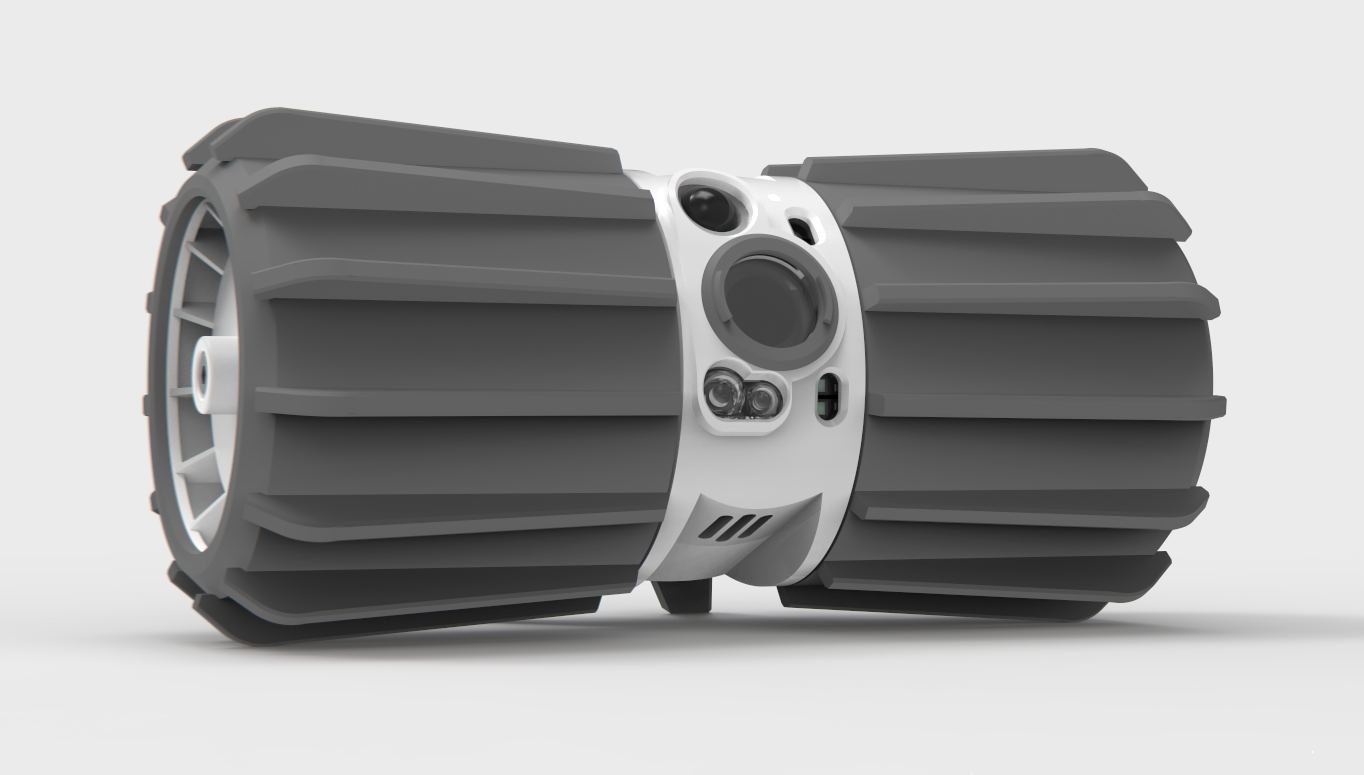 According to CO6, ReadySight streams video over dedicated first responder and commercial LTE networks. Controlled by a smartphone, it allows for “day and zero light usage,” while also enabling autonomous and semi-autonomous driving and patrolling modes, two-way audio communication, and unlimited range and usage over cellular networks.

The robot has a built-in speaker and microphone, a foldable “tail,” and a time-of-flight distance sensor. Said camera relies on Sony’s sensor with a 120-degree wide-angle lens, a lens shield and a motion sensor paired with a front indicator LED. It also has high-torque motors that are powerful enough to tackle multiple terrain types and obstacles. 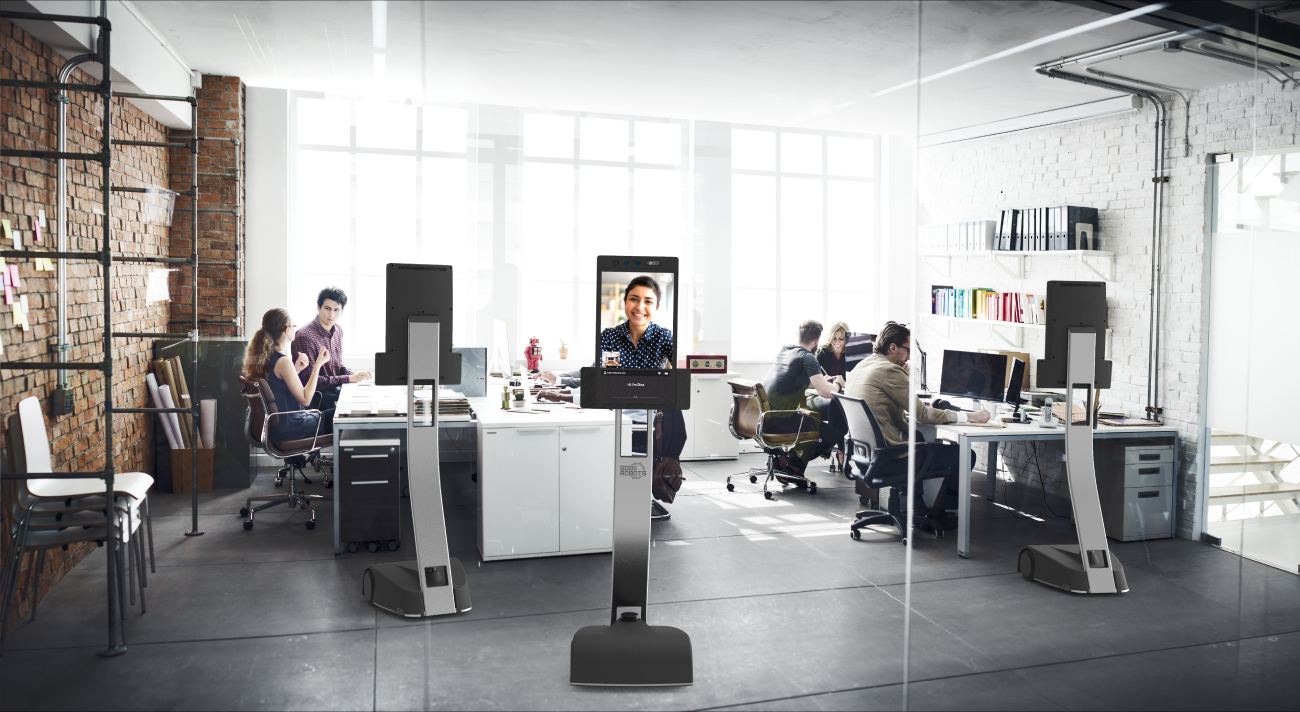 Designed to provide users with the experience of being in a meeting without actually going there, GoBe Robots are remotely controlled enabling a “distinct feeling” of being where the robot is as they receive live video streams of the location as the robot moves around it. This further enables active collaboration and interaction between people, no matter how far they are from each other.

During the Covid-19 pandemic, GoBe Robots have also emerged as an effective tool in breaking down chains of infection, preventing the spread of coronavirus and other diseases and overcoming closed borders – while reducing travel budgets, working hours and transport time.

The GoBe Robots telepresence robot allows communication through a 21.5-inch screen that reproduces the user’s face in natural size. A zoomable 4K camera and a wide-angle front camera give the “robot pilot” a clear overview of the location the GoBe robot discovers. This robot also stands out with an open system that creates even more applications and allows users to maximize the potential of the technology. For example, trade show organizers can give remote attendees the ability to book themselves directly into the telepresence robot and experience booths and events while engaging with exhibitors.

As of mid-2020, GoBe Robots had more than 150,000 existing users of its telepresence robots, which contribute to colossal CO2 reductions.

Autonomous roving robots may be coming to a sewer near you. Or at least, that’s what RedZone Robotics is hoping will happen and that municipalities will turn to its robots to inspect sewage pipes for corrosion, deformation, and debris in order to prevent leaks that could pose health hazards. 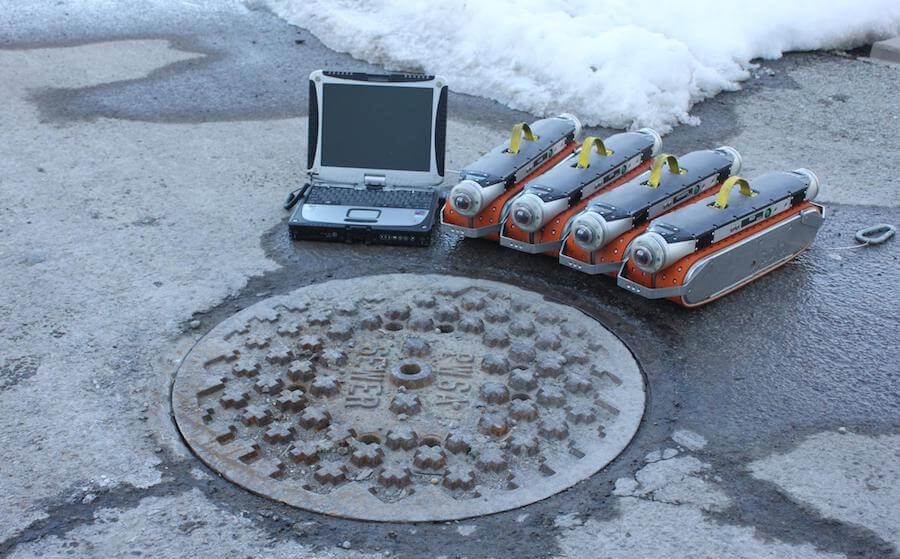 The company offers a few robots made to fit different pipe sizes, designed to be dropped into one manhole and find their way to the next one for collection. They carry cameras, laser, lidar, sonar, and hydrogen sulfide gas sensors which can corrode pipes. A combination of data from all these sensors is used to build a model of the pipe’s interior and identify, for example, which pipes have the most corrosion.

From that point on, Redzone’s analytics platform kicks in to provide insights into which pipes have to be replaced and which could be refurbished.

The company says that its inspection robots are cost-effective and even in cases when the cost of the inspection is similar to existing methods — when inspecting larger pipes — the data acquired is much richer. Also, their method is faster than conventional inspections.