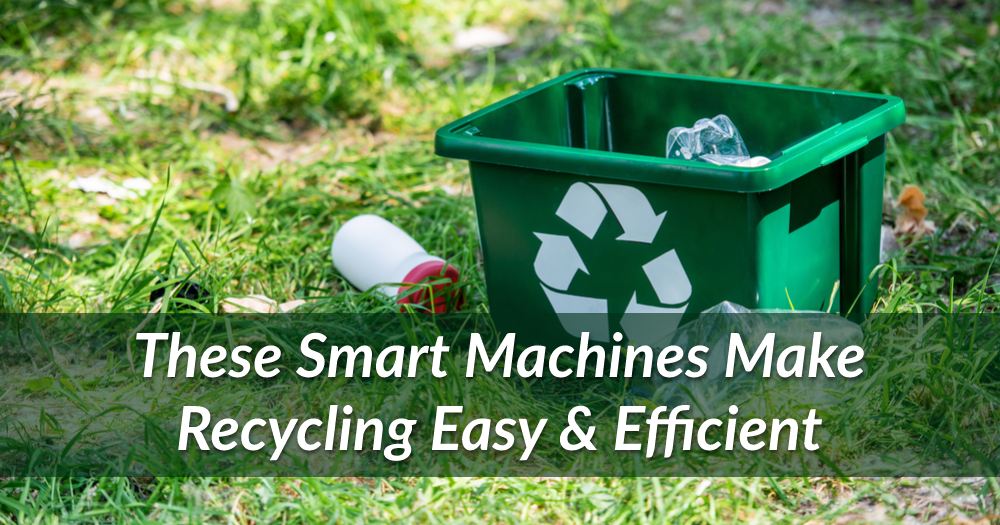 Most of us know that some of our trash can be recycled, but sometimes it’s a pain. And even when it’s possible and we do the work on our behalf, it’s not as enticing and/or seamless as it could be.

A few smart folks realized there’s an untapped market here and so they launched novel products that make recycling easy, efficient and — in some cases — even fun. Read on about a few different machines that make this a reality.

A kiosk machine that pays out for old batteries

Swedish company Refind Technologies has an elegant solution called the Battery Refund machine – which is a reverse vending machine for waste consumer batteries.

The machine enables customers to return all kinds of household batteries – including AA, AAA, C, D and 9V. It can identify the size of the battery, counts them and returns a receipt that can include for example a discount coupon or any other kind of refund in written format. The logic behind the refund is programmable and possible to change if needed. 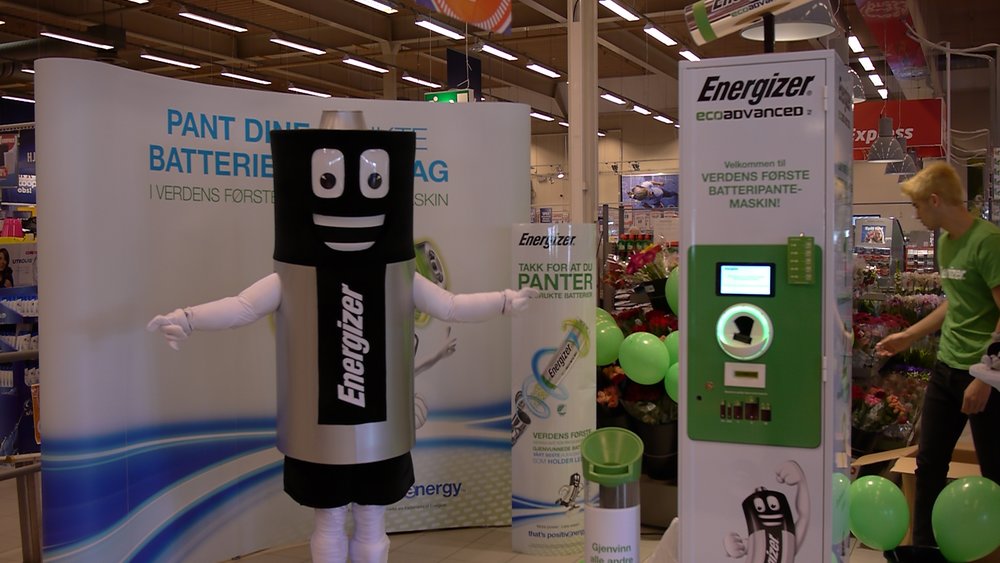 The machine is targeted for battery collection points such as retail stores and battery manufacturers, enabling them to introduce incentives while collecting statistics on returned batteries.

The first Battery Refund machine was launched on Earth Day, 22nd April 2017, at Coop Norway and initiated and funded by Energizer.

Waste is a major problem in Cairo, with the city’s 20 roughly million inhabitants producing more than 15,000 tons of waste, and according to the World Bank – only 60% of this garbage is collected, while the rest is left to clog up the city’s streets and sidewalks.

Cairo, Egypt-based ZeroPrime Technologies came up with an innovative way to incentivize people to recycle their trash. The product, called CanBank, is a smart reverse vending machine that rewards people for recycling their rubbish. 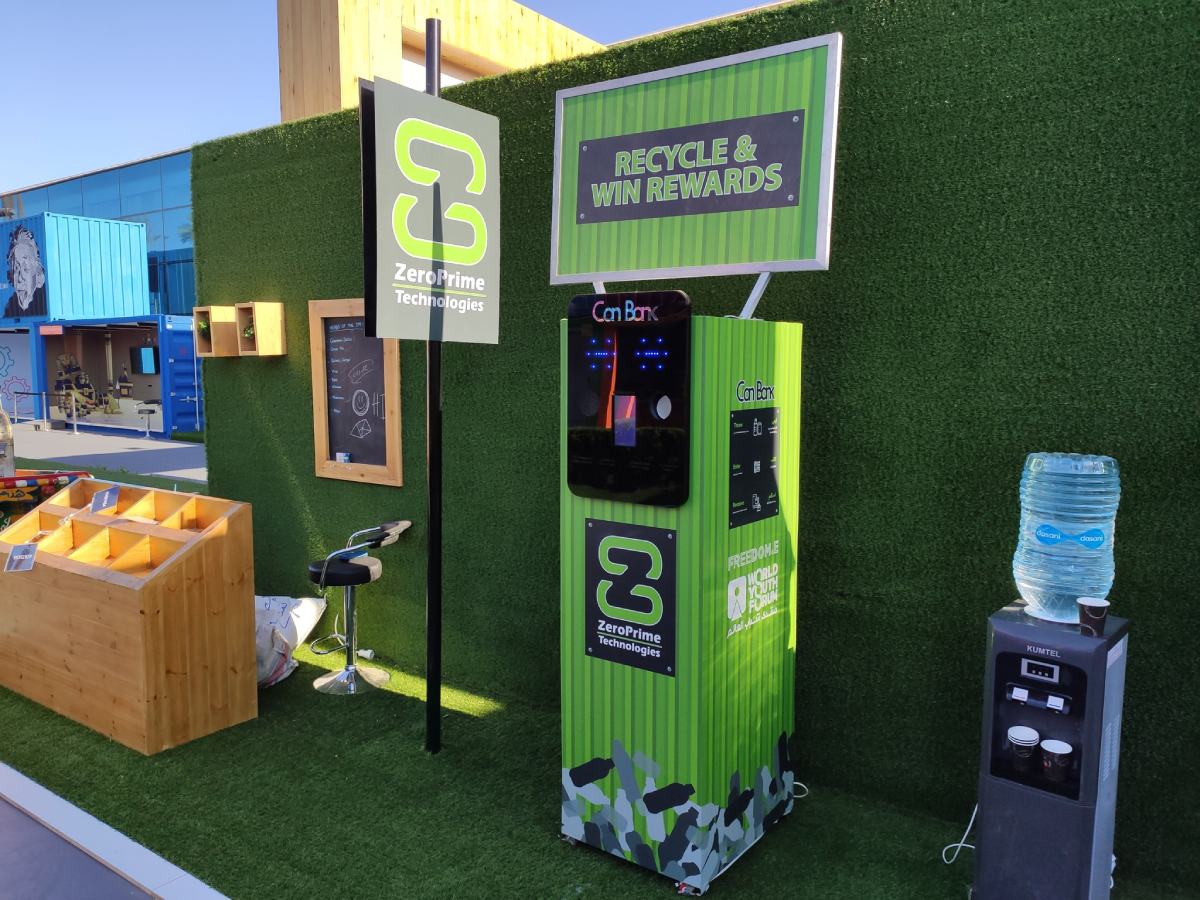 As such, it allows people to recycle plastic bottles and cans in exchange for rewards, such as phone credit and Careem promo codes (an Uber-like service). What’s more, the machine can even play the user’s favorite song and read them a funny message.

Once you insert a bottle or can, CanBank detects what you have deposited and automatically sorts it, so it’s ready to be given to garbage collectors – who can then sell it to factories. There are also those who just want to help the environment, which is actually the goal of ZeroPrime Technologies.

A smart trashcan that can recognize and automatically categorize recycling litter

Bin-e is a Polish company behind a smart trashcan with sensors, image recognition technology and artificial intelligence. As a result, it can recognize and categorize recycling litter into one of its smaller bins faster than a human being. The litter is then compressed, so it occupies less space.

This further means spending less time sifting through and sorting various products into categories for recycling. 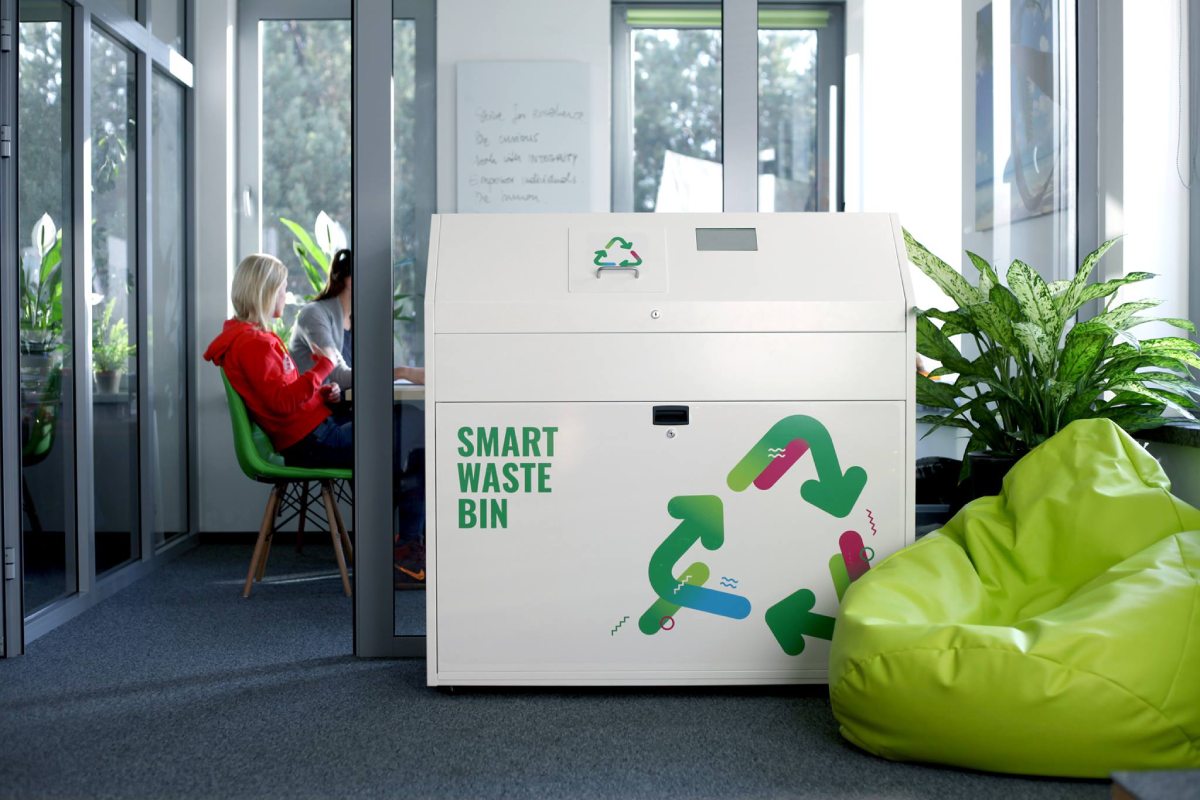 At Bin-e, executives believe the simplicity of recycling in this manner may mean that more of us “do our bit” for the environment, without really thinking about it.

The smart bin comes with a touchscreen with an easy-to-grasp interface that leads users through the process and informs them about the fill level. It can connect to the internet via WiFi or LAN connection.

Right now, Bin-e is offered only in the “office version” with a subscription service that enables users to arrange specific collection services. Going forward, the company plans to create an outdoor version and later the home version.

International design and innovation office Carlo Ratti Associati, in partnership with Eni, has developed an experimental Circular Juice Bar that uses oranges to make bioplastic, turns it into filament, and 3D prints disposable cups to drink the freshly-squeezed juice. Called “Feel the Peel,” the prototype has been on a tour of public places around Italy to demonstrate a new approach to environmental circularity in daily life. 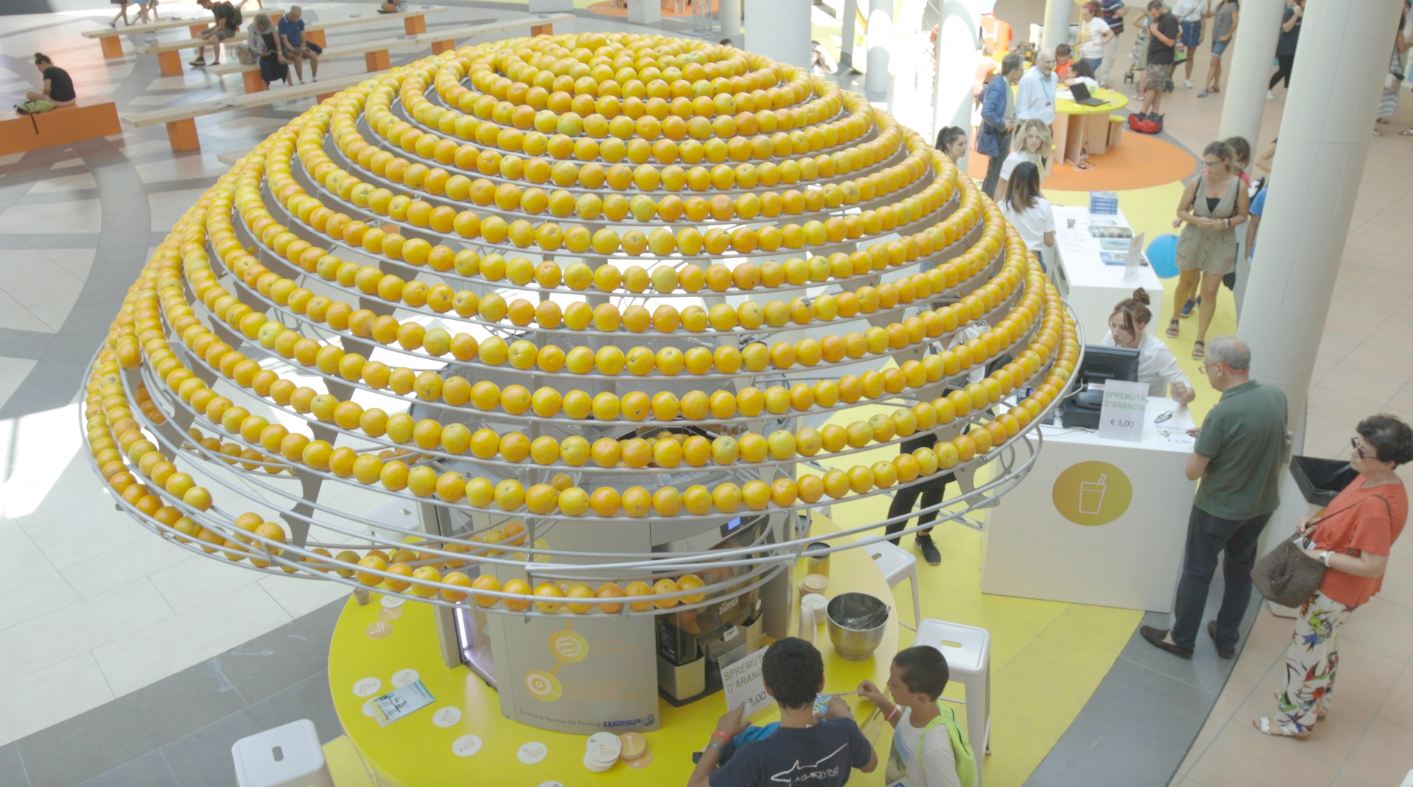 The product is a 3.10-meter tall orange squeezer machine that is topped by a dome filled with up to 1,500 oranges. When someone orders a juice, oranges slide down into the squeezer and as each orange is cut in half — its peel falls into the lower part where they accumulate. Through a process of drying, milling, and mixing with Polylactic Acid (PLA) – peels become a bioplastic. This bioplastic is then heated and melted into a filament that is used by a 3D printer incorporated into the machine. The resulting cups can be used to drink the freshly-squeezed juice and then recycled.

Visitors to the “Feel the Peel” installments can first-hand experience the 3D printing process, with the concentric layering of the filament building their cup right in front of them.

A machine that crushes beer bottles into sand for construction

Expleco is a New Zealand-based company specializing in the design and manufacturing of compact glass bottle crushers that turn bottles into a fine grade sand (with no sharp edges) that could be used by the construction industry. As such, these crushers help reduce pressure on global landfill and waterway catchments.

Perhaps the most interesting part is that the sand from crushed bottles is better than the ordinary sand because of its high silica content, which holds better with bricks and concrete. 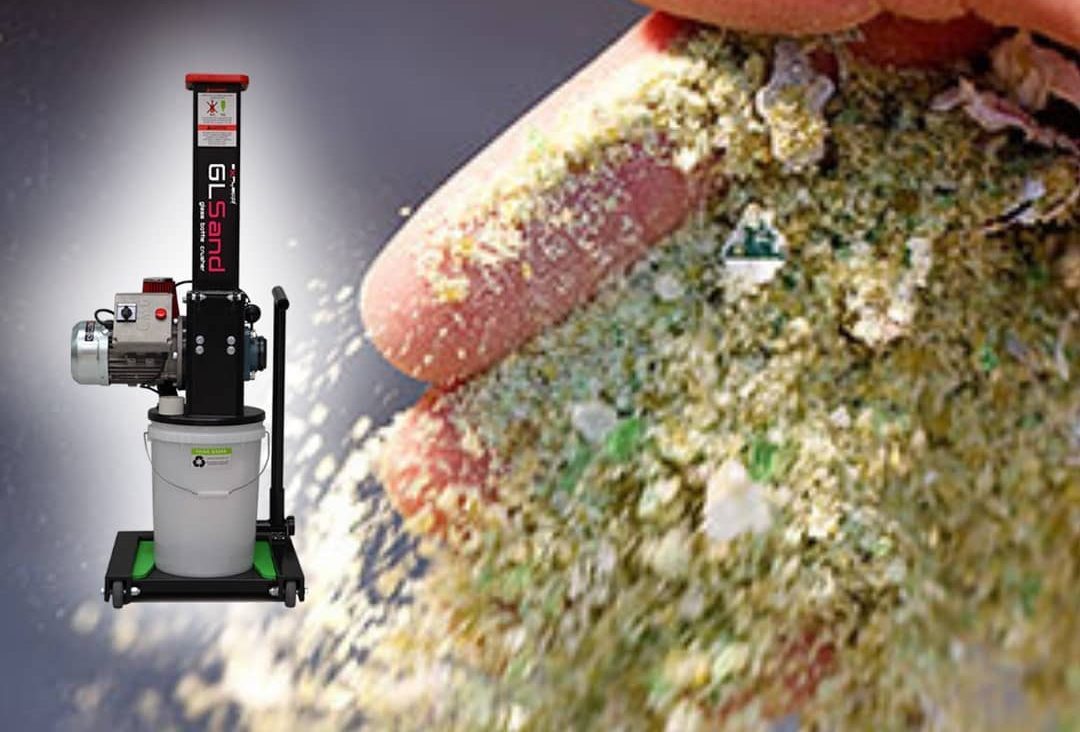 The company had a relatively modest success in New Zealand, where it managed to sell about 300 machines to local businesses — though part of that has something to do with the muted economic conditions of the past few years

The real growth has been overseas, with export markets including island resorts in the South Pacific, the Caribbean, and the Maldives.

Expleco is also working to supply its glass-crushing machines to hotels in New York City, bars in a Texas football stadium, as well as to help the Glass2Sand project in India — which aims to reduce the environmental impact of non-recycled glass bottles.