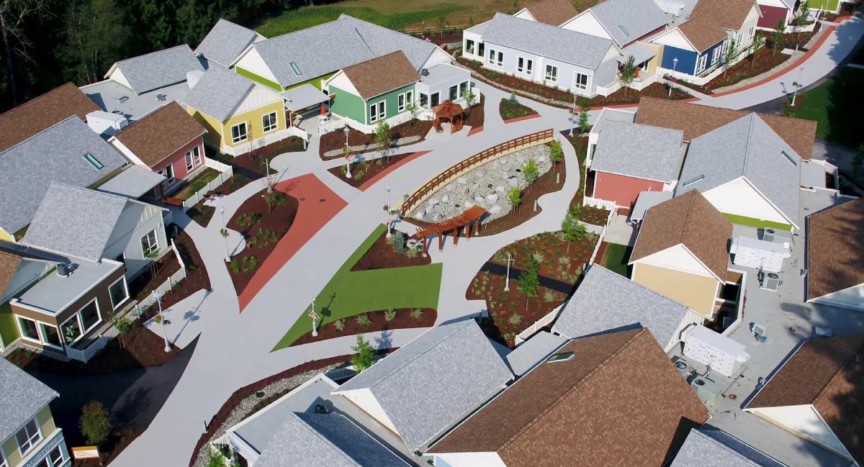 Every person’s fundamental desire to achieve well-being, purpose and fulfillment should not diminish with age or dementia. Keeping people connected to family, and finding a sense of place in a community is essential for a full and meaningful life — as is ensuring each person has the right to direct their own day-to-day living in a safe, natural environment.

That idea has prompted Elroy Jespersen to develop an entire village dedicated to dementia patients — which it refers to as residents rather than patients — allowing them to shop, have a coffee, walk their dog, get their hair cut, and take part in activities such as gardening by themselves.

Called The Village, it is located in Langley, British Columbia, Canada, and its goal is to make life easier for people suffering from dementia. The Village does that by providing true care through “genuine, two-way relationships and focusing on the possibilities within each resident,” to help them live a life of fun, laughter, love and joy — a full life.

The residents can walk around freely — but the facility is equipped with cameras and sensors, and surrounded by a 2.5-meter fence so they can’t wander off. To make for an even safer experience, every resident is equipped with a “wellness bracelet” that monitors their vitals and location so staff can keep track of their whereabouts.

These amenities don’t come cheap though, with the base rates starting at CA$7,300 per month. The plan is to work with the government to make it more affordable to people so that there is a real community of people of different income levels.

The Village was announced in early 2018 and saw its first residents in August 2019.

The project is inspired by a similar facility called Hogeweyk outside of Amsterdam in The Netherlands, where 152 people live in 23 houses on 3.7 acres.

Dementia is a huge problem as it impacts not only individuals with dementia but also their carers and the wider society. Among people aged 60 years and over, dementia is ranked the 9th most burdensome condition according to the 2010 Global Burden of Disease (GBD) estimates.

Projects like The Village could help people suffering from dementia in a big way, offering them a safe environment where they thrive. Far from a hospital setting, it also houses nurses and other support staff to make life for the residents that much easier.
Time to Implement
⏱️⏱️⏱️⏱️⏱️
Cost to Implement
💰💰💰💰💰
* estimates

FOR PUBLIC OFFICIALS:
A project like The Villiage, presuming it's subsidized, could help local regional and even national governments tackle the huge challenge of dementia. Any official who dares to build this kind of facility will score votes in the next elections. Or at the very least, by proving their managerial capabilities, they may advance in some other way, career-wise. Considering the cost of building a small village, this could be a public-private partnership.
FOR BUSINESSES:
Building a small village may cost a lot, but it opens a big opportunity for profit. Also, helping people suffering from dementia is the right thing to do. This could be a major contract with the (local) government that could further be extended with facility management work. A construction company may only care about the first part, but some other kind of organization may care about the prospects of managing this kind of facility, as well. In any case, The Village solves a real problem and its development and/or maintenance could be a profitable venture.