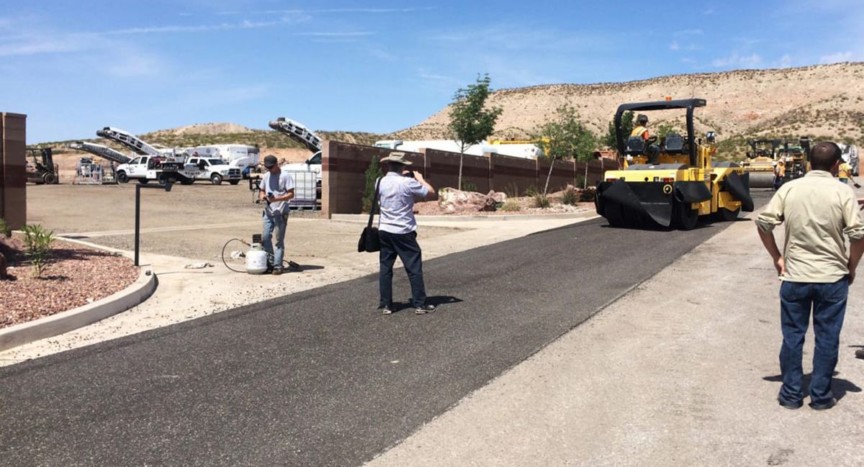 A company called TechniSoil Industrial has developed a special road technology that not only exceeds the strength of bituminous asphalt, but is also made from recycled PET plastics in the polymer formula — repurposing up to 1,200,000 plastic bottles per centerline mile.

The company claims that its TechniSoil G5 100% Recycle System represents a “large step forward in global road building,” adding that these roads will be “stronger, longer-lasting, and require less energy to install.” And because they utilize post-consumer PET plastics, the process allows for roads to be 100% recycled in place. This fulfills the growing demand for higher efficiency, longer-lasting construction of existing roads — while diverting plastics from our waterways, landfills and oceans.

Working with a leading cold recycling machine manufacturer, Roadtec, TechniSoil Industrial has helped create a machine line that will “take cold recycling into the next century.” Specifically, it has created the next generation of recycling and processing capabilities in a central batch configuration that allows RAP (Reclaimed Asphalt Pavement) processing and mixing to be done in a portable design. Additionally, computerized metering and variable belt feeds offer flexibility and utility to an “already groundbreaking system.”

The method basically breaks up plastic into tiny pieces, which are melted into oil to replace petroleum-based bitumen. This composition is then mixed with asphalt waste (previously crushed), creating a new pavement that is stronger than the previous one.

The technology has been put to test in October 2019 in Los Angeles, where the company got to lead two road renovation projects. The city itself chipped in by setting up dozens of collection points across the city to raise the required volume — a few tons for a single street asphalt — of plastic to be turned into oil.

If everything goes as planned and the new road proves to be tougher and more durable, the Los Angeles Street Service Department says its use will “significantly reduce maintenance costs.”

Combining road construction and recycling makes a lot of sense, but it is not easy to combine the two. The TechniSoil G5 100% Recycle System seems to tick all the right boxes by making tougher roads that also have a positive environmental impact, as thousands of PET bottles are reused. In addition, the technique allows the recycling of damaged asphalt, while making for a more economically viable alternative than traditional asphalt.
Time to Implement
⏱️⏱️⏱️⏱️⏱️
Cost to Implement
💰💰💰💰💰
* estimates

FOR PUBLIC OFFICIALS:
Lower cost and tougher roads are an instant win in the eyes of the public. Introducing new methods also helps the city — and a local project lead — advance in the eyes of the public. Add to that lower maintenance cost and you get to the point where it is harder to say "no" to plastic roads (rather than "yes").
FOR BUSINESSES:
Plastic roads present a solid opportunity for road building and engineering companies, presuming they partner with TechniSoil Industrial. Its technology is so promising that a major city like Los Angeles decided to test it out. All of the factors needed to score a government contract are there — high quality, new technology and lower cost. The money's there, you just need to grab it. ;)