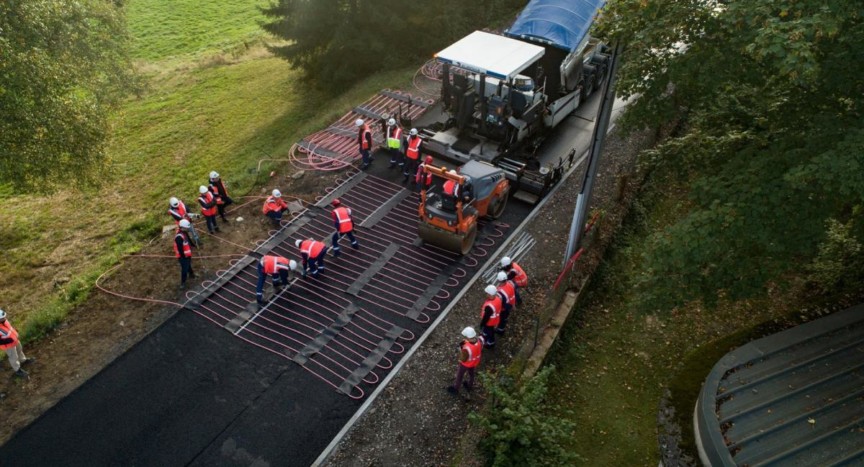 A company called Eurovia, which is a subsidiary of VINCI, has devised a new function for roads, namely, the production of heat energy. Called Power Road, it is able to capture the sun’s heat energy, which can be stored and distributed to nearby buildings and infrastructure through a heat-pump system. The magic happens in the upper layers of the road that stores a heat exchanger, consisting of tubes in which circulates a coolant.

The energy produced in this way can heat residential and office buildings, shopping complexes, eco-neighborhoods, and public structures such as swimming pools while enhancing their energy mix. In winter, this energy may also be used to remove snow and ice from parking lots, roads and airport runways — thereby reducing the need for salting operations. Specifically, 100% of the heating needs of a 70 m2 housing unit could be met with a 25 m2 road segment.

On the other hand, during summer – above-ground heat capture can cool roads and, as a result, lessen the effects of urban heat islands.

The main idea, according to Eurovia is for roads to play a new role in our transition to a carbon-free economy. And by storing heat energy, we can now shift the phasing of the production and consumption of a renewable energy source. In that sense, Power Road is a multiple-purpose solution that provides huge development potential that is proportionate to busy urban transport networks.

In addition to producing renewable energy, Power Road is itself a sustainable process. Its component parts — particularly, the tubes that make the heat exchanger — can all be recycled. Operating it is compatible with Eurovia’s other environmental solutions, including warm asphalt mixes and road-material recycling. Furthermore, with its ability to regulate temperature, Power Road prevents warping stresses, thereby extending the lifespan of roads.

Power Road is just like a regular road with added thermal energy production capacity by capturing the heat of the sun. This heat is stored and transmitted to surrounding infrastructure that helps to heat residential buildings, office buildings, shops, eco-neighborhoods or public facilities such as swimming pools, by improving their energy mix. In winter, this heat can be used to clear snow and ice from parking lots, airport roads or runways by reducing salting operations, and in summer to cool pavements and help to reduce urban heat islands through surface heat capture.
Time to Implement
⏱️⏱️⏱️⏱️⏱️
Cost to Implement
💰💰💰💰💰
* estimates

FOR PUBLIC OFFICIALS:
It makes perfect sense for governments to install Power Roads in some areas, starting with airports to cover the entire infrastructure — runways, parking lots and even surrounding roads. And this is especially true for the world's snowiest cities in the north. This not only saves time on salting operations but could also pay for itself in just a few years while offering that much better service at the airport.
FOR BUSINESSES:
Savvy road builders and construction companies could adopt this technology (license it) from Eurovia and offer it to modern cities looking to cut their carbon footprint. Specifically, Power Roads will find their best customers among the airport authorities, as well as major shopping malls, sports venues and all other buildings with huge parking lots — where heat absorbant roads could help keep roads clear from snow and ice in winter and cool them down in summer. This, in turn, could help companies come up with math that would justify the initially higher cost of building a Power Road instead of a conventional road.