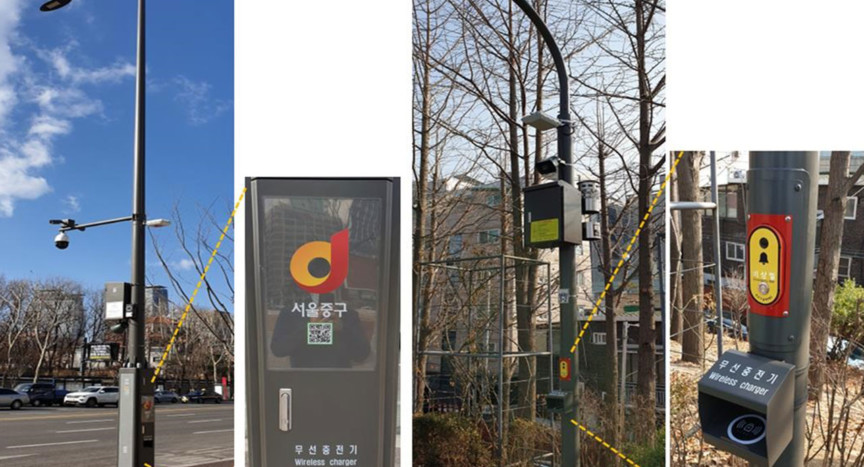 In 2020, the Seoul Metropolitan Government (SMG) announced that it would be installing “smart poles” (S-Poles) that not only act as street and traffic lights, but also smart infrastructure objects to offer and enable services and technologies such as public Wi-Fi, smart CCTV, IoT, smart crosswalk, etc.

As of April 2021, there are 26 new S-Poles in 6 areas of Seoul — including Seoul Plaza, Sungnyemun Gate, Cheonggyecheon Stream and more. Each S-Pole has customized functions reflecting the characteristics of the area. They also enhance urban scenery and improve the safety, welfare, and convenience of citizens.

The SMG aims to expand areas of S-Pole installations and pursue a pilot project to advance their functions at the end of 2021. Specifically, they want to add new capabilities to these S-Poles and use them for charging drones and electric vehicles and detecting parking violations — bringing Seoul one step closer to becoming a smart city.

The idea is to install stations on top to charge drones, while also using S-Poles to send data used for monitoring disasters and rescue operations. A function of monitoring illegal idling and parking will be added as well.

The S-Poles were born to replace several traditional city technologies such as the aforementioned traffic lights or streetlights, which could have many more features. The installation of S-Poles will lead to the amelioration of urban scenery through the integration of diverse facilities, saving the replacement cost by using the street facilities that have reached changing times, and securing the safety of the facilities.

The project also reflects a growing trend for street infrastructure to be multipurpose to minimize visual clutter and use of public space.

Last year, the Seoul Metropolitan Government (SMG) announced that it would install new "smart poles," or S-Poles, that act as streetlights, traffic lights, environmental sensors, smartphone chargers, Wi-Fi access points, CCTV, and more. As of April 2021, twenty-six smart poles are installed in six areas of the city — with each pole functioning to the requirements of its specific location.

Also, SMG will be piloting a version of the S-Pole system, which will also be able to charge drones and electric vehicles as well as count the footfall of nearby pedestrians. The project would also use drones to monitor potential disasters and provide data for emergency rescue teams.
Time to Implement
⏱️⏱️⏱️⏱️⏱️
Cost to Implement
💰💰💰💰💰
* estimates

FOR PUBLIC OFFICIALS:
Adding new functionality to the existing infrastructure is practical as it doesn't require any extra space. Perhaps, your municipality could start with antennas for local Wi-Fi, or perhaps — if it can afford — include other capabilities to the mix, as well. Not sure that many cities outside of South Korea and perhaps Japan will be willing to add drone stations to street poles, but turning them into charging stations for EV vehicles definitely makes sense. It's a novel idea that could bring some (political) points to the person behind this idea. And yes, that could be you!
FOR BUSINESSES:
With cities across the globe trying to add "smarts" to the way they work, your company could help them achieve these goals. By proposing a system that takes advantage of existing infrastructure and locations like poles, you could win a few contracts. Perhaps you could propose placing Wi-Fi antennas on poles or perhaps you could take a few extra steps and partner with other players which could make these poles even smarter. Drone stations may not be that interesting in many places, but turning existing poles into EV charging stations definitely makes sense. It's an idea worth pursuing.