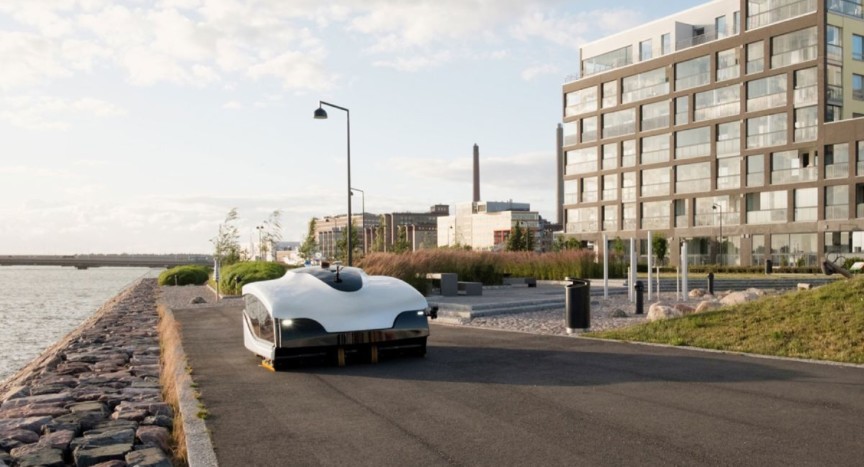 Street cleaning is something every municipality has to do. Generally speaking, it involves hand sweeping by individual workers, hose flushing, and machine sweeping. It is not deemed a glorious job but it has to be done by someone. Except, that is, if a robot can’t do it instead.

Enter Trombia Tech, a Finnish road maintenance equipment manufacturer known for its cutting-edge innovation for dust and snow clearing technologies. They have been keeping up with the times and now their Trombia Free street sweeper is autonomously cleaning the streets in Finland.

Boasting a modern design, Trombia Free is 3.52 m long, 2.3 m wide, and weighs around 2,600 kg. It is also quiet, making it possible to sweep the streets at night, hindering traffic as little as possible.

The first commercial pilot program of this fancy robot was launched in March 2021 in the City of Espoo with the goal to “kick start the era of greener and more sustainable city cleaning.”

“When we think about the over 3 million CO2 metric tons of carbon emissions that high power diesel-fueled suction street sweepers around the world produce annually, we see that smart cities around the world can act to reduce their energy consumption and carbon emissions significantly by modernizing the way street cleaning is made,” Trombia’s CEO Antti Nikkanen said at the time of the pilot announcement.

Trombia Free cleaning devices use less than 15% of the power required by currently available heavy suction sweeping technologies. As a result, the company promises to help cities take down the power requirements dramatically without compromising the quality and effectiveness.

Moreover, Trombia Free units are equipped with an all-weather autonomous, LiDAR-based, machine vision technology that filtrates the noise coming from the environment in rainy, snowy or alternative conditions. The advanced algorithm can absorb data on objects from various sources while generating millions of illustrations of the object at once. This enables accurate and safe localization in all-weather conditions.

During the pilot period in Mankkaa, Espoo, autonomous functions and machine vision were tested, as well as different ways to integrate the autonomous sweeper with other logistics.

Additional Trombia Free pilot programs are planned for the rest of 2021, including the one in Helsinki which has already started. Also, the company plans to test out its offering with heavy industrial sites where they think Trombia Free could deliver effective, autonomous and carbon free cleaning.

The fancy robot is 3.52 m long, 2.3 m wide, and weighs around 2,600 kg. It is also quiet, making it possible to sweep the streets at night, hindering traffic as little as possible. In addition, Trombia Free has the ability to detect obstacles and pedestrians.

The cleaner uses LiDAR technology and machine vision technology to circulate cleaning city streets and lanes and can operate in all weather conditions. Trombia Technologies says the robot uses less than 15% of the power required by conventional street cleaning technology; it needs only 6 to 10 kW of power to clean cities. In comparison, traditional diesel street cleaners use 70 to 130 kW of power.
Time to Implement
⏱️⏱️⏱️⏱️⏱️
Cost to Implement
💰💰💰💰💰
* estimates

FOR PUBLIC OFFICIALS:
Get in line to procure one of these fancy robots. It will not only help make your municipality cleaner but will also send a clear message to your constituents and everyone else looking to move to your city/town — that they're in an advanced place that has no problems adopting the latest technologies. Such a message is well received by both individuals and businesses, and that further translates into (political) points for the person behind the initiative to procure Trombia Free unit(s) in the first place. See where is going? ;)
FOR BUSINESSES:
Trombia may be onto something with their autonomous cleaning robot but sooner or later, they will need distributors to reach new markets. And that's where your company could kick in to serve as a middleman and get a cut of every sale to the municipality (or more of them) in your area. Or, you may want to include it in some smart city plans and sell it to the municipality — if your business is in the project management area. There's an idea.