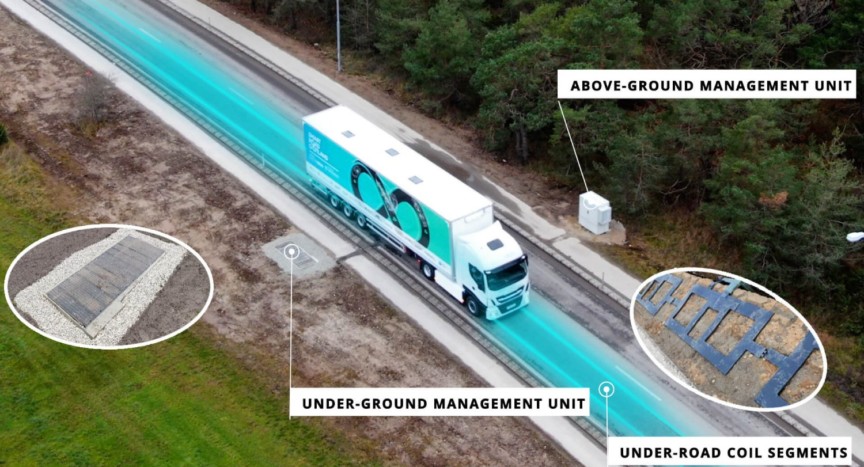 In mid-December 2022, Electreon — which provides wireless and in-road wireless electric vehicle (EV) charging technology — announced that it would be deploying its technology in the first-ever public wireless road project in Germany. This project will power a public electric bus.

In collaboration with German provider of EV charging infrastructure EnBW, Electreon will be deploying 1 km of Electric Road System (ERS) along a stretch of road, as well as two static charging stations — which are determined based on the bus route and where the bus stops during its operational schedule.

The technology will be deployed in the city of Balingen in two phases. In the first phase, a 400-meter-long route with two static charging stations will be deployed. In the second phase, the electric road will be expanded by another 600 meters. The project will charge an electric bus en route to the city.

This project comes on the heels of a successful pilot of Electreon’s technology in the city of Karlsruhe, again in partnership with EnBW. For that pilot, an electrified road was installed at the EnBW training center — powering a local public bus at peak hours. As part of the agreement for this latest project in Balingen, Electreon will receive up to €3.2 million to deploy the dynamic and static wireless charging infrastructure.

“The project in Balingen shows how innovatively and consistently we are promoting e-mobility in Germany. We have a holistic approach and want to make wireless charging technically fit for German public transport. This also includes convincing authorities, energy network operators, bus operators, and the general public of the opportunities,” said tDr. Maximilian Arnold, who is overseeing the project at the EnBW research division. “As a leading provider and innovation driver in the field of charging infrastructure, we are pleased to be part of this promising project with partners such as Electreon, and the Karlsruhe Institute of Technology.”

“The aim of this project is not only to open up wireless charging to the public in Germany,” added Dr. Andreas Wendt, CEO of Electreon Germany GmbH. “Other significant aspects include the development and use of a tool that will assist public transportation planners in where to install the inductive infrastructure for a specific town or region. We have already shown in our joint Karlsruhe project with EnBW how effective, safe, and easy to deploy wireless dynamic charging is. We hope this is the start of many more projects on public and private roads in Germany.”

Electreon Germany GmbH is a subsidiary of Israel-based Electreon Wireless, which award-winning inductive technology dynamically (while in motion) and statically (while stopped) charges EVs quickly and safely, eliminating range anxiety, lowering total costs of EV ownership, and reducing battery capacity needs. The company works with cities and fleet operators on charging as a service (CaaS) platform that enables cost-effective electrification of public, commercial, and autonomous fleets for smooth and continuous operation.

At the end of 2022, the Israeli company Electreon, which specializes in wireless and in-road wireless electric vehicle (EV) charging technology, announced that it would be deploying its technology in the first-ever public wireless road project in Germany.

As part of the deal, Electreon will be deploying 1 km of the Electric Road System (ERS) along a stretch of road, as well as two static charging stations.

The technology will be deployed in two stages in the city of Balingen. In the first phase, a 400-meter-long route with two static charging stations will be deployed. In the second phase, the electric road will be expanded by another 600 meters. The project will charge a public electric bus en route to the city.
Time to Implement
⏱️⏱️⏱️⏱️⏱️
Cost to Implement
💰💰💰💰💰
* estimates

FOR PUBLIC OFFICIALS:
If you're looking to entice more people in your community to buy EVs, you may want to contact Electreon and see whether and when they can bring their technology to your area. Perhaps you could also tap into some federal funds for such a project, which will also present your city/town as forward-thinking, thus being open to new ideas and technologies. That further attracts top talent, leads to more people coming to your area, and ultimately increases the taxing pool you can tap into for future projects.
FOR BUSINESSES:
If you're doing business in construction-related areas, you'll want to explore partnering with companies like Electreon. Chances are they are looking to bring their tech to as many places as possible, which could be your chance to bring them on board. Perhaps you could also involve the federal government in your plans, as they may provide subsidies for making roads more friendly to EVs. That's what most governments are talking about these days, after all.