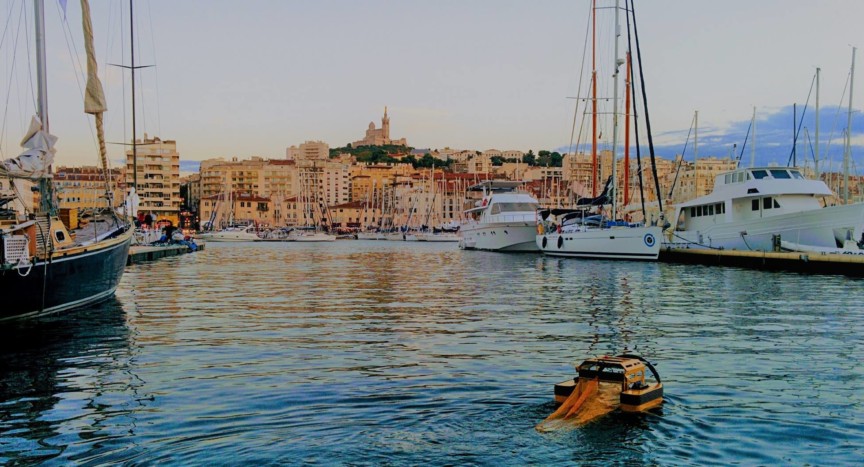 The port of Cassis in southern France has found an innovative solution to keep the marine clean from plastic bags, packaging, discarded drinks bottles, and even used surgical masks floating in the water among the boats in the marina. That solution comes in the form of a small electric robot called Jellyfishbot.

Designed by the French company IADYS, it is a remote-controlled electric-powered boat capable of collecting floating waste and oil from the surface of the water into a net that it trails behind its twin hulls. The suitcase-sized vehicle can get into the corners and narrow spaces where rubbish tends to accumulate but which are difficult for cleaners with nets to reach.

The trash-collecting robot collects everything in its path, from plastic waste, glass to natural waste and floating algae. It can also collect all types of hydrocarbons such as oils, diesel, kerosene and gasoline.

The user has remote access to video on a smartphone using an onboard camera throughout the mission. When the net fills up, the operator can then command the robot to return to its starting point where the waste can be removed and the net emptied. The vehicle will also be able to detect obstacles and collect waste autonomously.

Beyond marines, Jellyfishbot can also be used for the decontamination of other difficult to access aquatic areas such as ports, lakes, canals, as well as leisure centers, hotel residences, and industrial facilities.

The handy trash-eating robot is in operation in around 15 French ports and has been exported to several countries worldwide, including Norway, Switzerland and Japan. 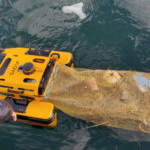 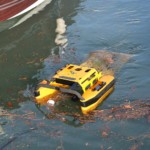 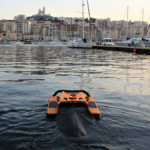 Jellyfishbot is an innovative trash-eating robot for cleaning marines and other facilities on the water. Because of its small size, it can get into the corners and narrow spaces where rubbish tends to accumulate but which are difficult for cleaners with nets to reach.

The small robot is in operation in around 15 French ports, and has been exported to other countries — including Singapore, Japan and Norway.
Time to Implement
⏱️⏱️⏱️⏱️⏱️
Cost to Implement
💰💰💰💰💰
* estimates

FOR PUBLIC OFFICIALS:
If your municipality is located next to the waterfront which quickly gets dirty, you could consider procuring Jellyfishbot to help the efforts of keeping the marine and other facilities in the water clean. The price of such a device tends to be lower than what you would pay for a single person for a year, yet it can work under all kinds of conditions and perform tasks that are at least uncomfortable for human beings. At the same time, a device like Jellyfishbot will show your municipality in good light as the one willing to embrace new technologies to keep the city going.
FOR BUSINESSES:
If your business serves or hopes to serve municipalities close to the water, consider contacting IADYS and ask them for a distribution deal. They are already exporting their robots to countries around the world and chances are, they are willing to talk. You can profit from a transaction as a middleman and perhaps even explore maintenance contracts — all while helping keep the waterfronts clean for your municipal clients. It's a win-win, from what we can tell.