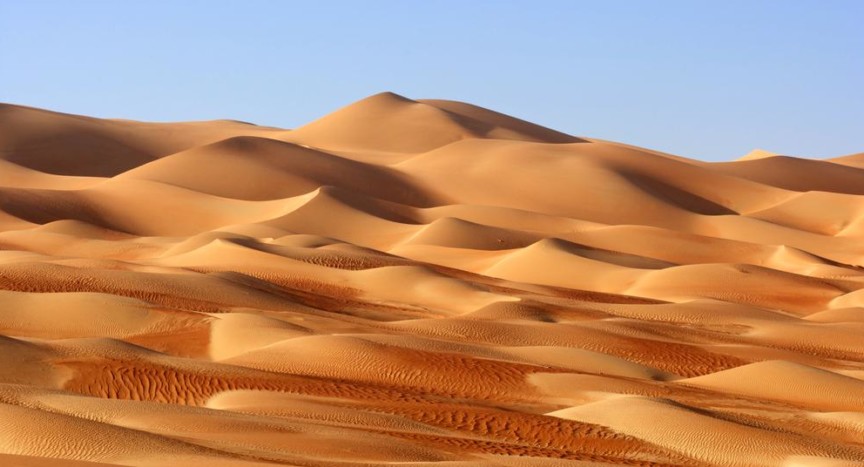 Sand is the most consumed resource on earth after fresh water, yet it is being excavated at a rate faster than it can renew itself. And, naturally, there is an increasing concern about the world’s dwindling supplies of construction-grade sand, which is an essential ingredient in concrete.

Scientists at Imperial College London have found a way to overcome this problem; they developed a new construction material that is as strong as concrete but has half the carbon footprint.

Called Finite, the material is biodegradable and made from desert sand, which is a resource that has until now been useless for construction.

Whereas course, gritty construction-grade sand is stripped from beaches and river beds — desert sand has remained an untapped resource as its wind-swept grains are too fine and smooth to be used as filler in concrete.

Finite uses proprietary binder ingredients that are a guarded secret, but the scientists are confident that it outperforms concrete on key sustainability metrics. Specifically, the main binder in concrete is responsible for 5% of global CO2 emissions.

Furthermore, the new material is also said to be much more reusable than concrete, which often ends up in a landfill. In contrast, Finite is non-toxic and can be left to decompose naturally, or remolded to be used in another project. The material could be used to make pavilions, then after three months when the event ends it can be deconstructed safely.

The team believes Finite is ideal for use in the Middle East as the raw material for the concrete alternative can be scooped straight out of the desert, rather than being expensively imported.

Early experiments with resin casting have demonstrated that Finite can also be used to create objects such as vases and bowls. Left untouched, it takes on the color and gradation of the filler, but natural dyes can be added in the mixing process.

Cost-wise, Finite should be a viable competitor to concrete in the construction industry once it is manufactured on a larger scale, because of the abundance of raw materials.

Finite is welcome in light of the global shortage of construction-grade sand. The concrete industry alone uses approximately 25 billion tons of sand and gravel each year, and glass production is another sand-intensive market.

Novel materials made from readily available substances or those that can be recycled after their initial use are making headlines. This helps create a circular economy, which aims to recycle as much as possible while using as few raw resources and throwing away as little as possible.

That being said, and as researchers suggest, Finite is ideal for countries in the Middle East where the raw material can be easily scooped straight out of the desert, rather than being imported from other countries.
Time to Implement
⏱️⏱️⏱️⏱️⏱️
Cost to Implement
💰💰💰💰💰
* estimates

FOR PUBLIC OFFICIALS:
It is never easy to sell a novelty, but it paves the way for modern leaders to show themselves as men/women of the future. For start, they could pick a small project that would be built using Finite for their city/country and eventually expand from there. By mastering this technology, they not only show themselves as someone embracing "green" initiatives but also open up the opportunity for new jobs in the community — potentially scoring points (votes) across multiple fronts.
FOR BUSINESSES:
Selling a novelty to the government is a tricky yet potentially rewarding task. Nevertheless, it is possible with Finite's low-carbon credentials helping along the way. The new material is not only better for the environment, but also shows the city/country — as well as the service provider — in a more modern light. The first company to successfully build a project using sand from desert stands to win big contracts down the road.