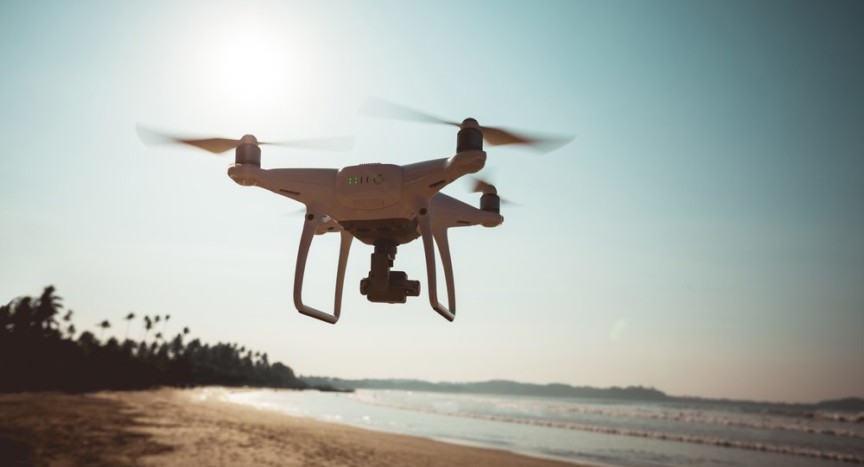 In the summer of 2021, Oak Island, N.C. started taking their beach patrol to the skies, with its drone program quickly proving to be the most efficient way to keep tabs on what’s taking place along the shore.

“We can see areas that the naked eye that’s on ground level would not necessarily be able to see right off hand,” communications manager Mike Emory said. “While the police may be at one area, or beach patrol at one area, the drone can be up in the sky, identify something in another area and help the beach patrol or even water rescue teams get to where they need to be.”

In addition to keeping beach-goers safe, Oak Island is also attempting to use the program to keep people off the renourished dunes. To that end, the drone is able to fly over to anyone who is walking on the dunes and talk to them through a speaker on the front.

Drone pilot Shawn Barry says that’s usually enough to get people to move back onto the outlined paths.

“We utilize the drone to keep an eye on the dunes,” Barry said. “If there happens to be anyone in the areas they’re not supposed to be, outside of the posted rope crossings. We’ll keep the drone and patrol those areas with the drone.”

Barry feels the drone program will continue to bring a number of benefits to Oak Island.

“It’s definitely a money-saver,” Barry adds. “It enhances our preparedness as well as any mitigation that we have for any future type of storms or events that could affect us in our community. So it’s definitely a game changer, and in a positive way.”

Officials say the drone program is one of the first in Brunswick County, but they hope to see other towns follow their lead.

Oak Island, N.C. began utilizing a drone to patrol its coastline in the summer of 2021. The program helps monitor beach safety while also helping protect the dunes. To that end, the drone is able to fly over to anyone who is walking on the dunes and talk to them through a speaker on the front. It can also snap pictures of someone who refuses to leave the dunes and inform the police.

In the United States, drones have been used on beaches for a variety of purposes, including shark detection and rescue missions. Other countries have also sent drones to beaches. In Australia, drones have been used for years to track sharks, and last year, the country had drones monitor citizens on beaches for social distancing. This year, the town of Sitges in Spain has also started enforcing social distancing on beaches with drones.
Time to Implement
⏱️⏱️⏱️⏱️⏱️
Cost to Implement
💰💰💰💰💰
* estimates

FOR PUBLIC OFFICIALS:
You could consider procuring a drone if your municipality has a beach. It will not only make it easier to survey what's going on during the summer days, but could also work in the off-season to watch for the municipality's property. Finally, it's worth adding that a drone is a cost-effective way to survey a large part of the land (beach) and that could be its selling point to the constituents. It's there to keep them and the property safe - without breaking the bank.
FOR BUSINESSES:
This is an opportunity for drone resellers or companies that could offer some sort of "drone education" and maintenance. In addition to selling just the drone, you could sell the "entire package" that includes providing education on how to use the drone to the local government's employees and ongoing support. This way, you wouldn't be selling just a fancy quadricopter, but a tech solution that keeps the people and property safe(r). As such, it should be an easy sell to the city constituents, as well.