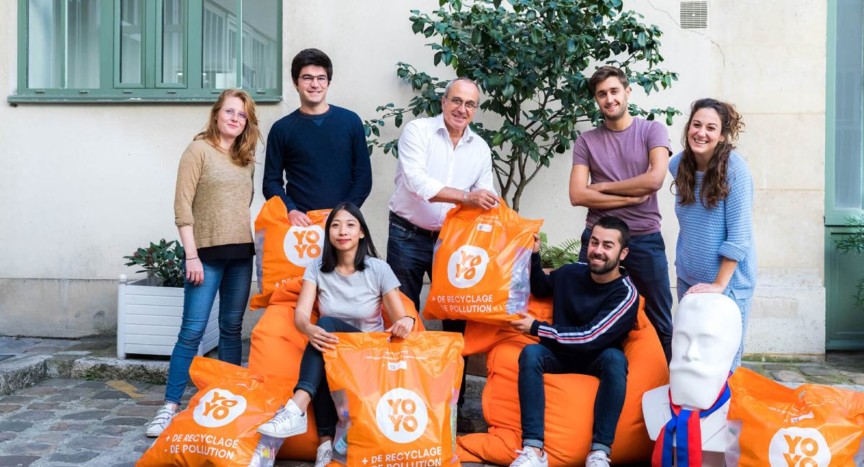 Most people in the Western world are aware of the benefits of recycling. Simply put, by reusing some of the materials found in everyday products, we get to help save the planet.

Alas, not everyone is doing it — cause it’s not easy. Some neighborhoods and cities don’t have trashcans dedicated to different kinds of waste, making it harder for regular citizens to dispose of their waste in a proper way. Also, some people find it cumbersome to do anything about it if that would require a modification of their daily routine.

French startup Yoyo, founded in 2017, wants to change that attitude by applying the same principles of organizations like Alcoholics Anonymous (AA) to entice people to recycle more. Instead of relying on specialists’ knowledge and marketing messages, organizations such as AA and Weight Watchers focus on open communication, progress tracking, group celebration and supportive relationships among members.

Similarly, Yoyo connects participants with coaches, who can be individuals or businesses, to help them sort recyclables into orange bags. Said coaches train and encourage sorters, and both earn points and rewards such as movie tickets for collecting and storing full Yoyo bags.

When the coach has filled their storage space, Yoyo comes and collects the bags, to take to a recycling facility.

The tech-enabled process involves a mobile app and a web-based dashboard for tracking the impact. It also includes public recognition, giving sorters positive social visibility for work that is ordinarily considered thankless. And because rewards tend to be local, Yoyo’s infrastructure has the potential to improve members’ community connections, strengthening the perceived and actual social power of the group.

Two years after launching the program, Yoyo’s community has grown to 450 coaches and 14,500 sorters while collecting almost 4.3 million plastic bottles. That’s an impressive start for any organization, let alone a non-profit one.

Most people know they should recycle, but their good intentions can fall short when it comes to following through. Programs such as the one operated by Yoyo can change that by helping people to feel more engaged with recycling. Additionally, because it is also a community-building exercise of sorts, Yoyo could also potentially help people in other ways, from relieving loneliness to fueling the growth of community businesses — which could both offer rewards to the recycling community and use Yoyo's platform to advertise their offerings.
Time to Implement
⏱️⏱️⏱️⏱️⏱️
Cost to Implement
💰💰💰💰💰
* estimates

FOR PUBLIC OFFICIALS:
Recycling initiatives allow public officials to score easy points in the eyes of their constituents. However, creating a system like Yoyo requires significant resources in terms of application development, organizing local communities and so on. A city may partner with Yoyo or lead a public-private partnership that would create a similar system to engage the public, mostly youth, into recycling.
FOR BUSINESSES:
A business could offer a tech solution that would work in a similar way to Yoyo, and intermediate between the program and its sponsors to its benefit. Alternatively, there is also an option to develop and sell (or rent) the software to the city or other organization(s) that would be in charge of managing the recycling program.