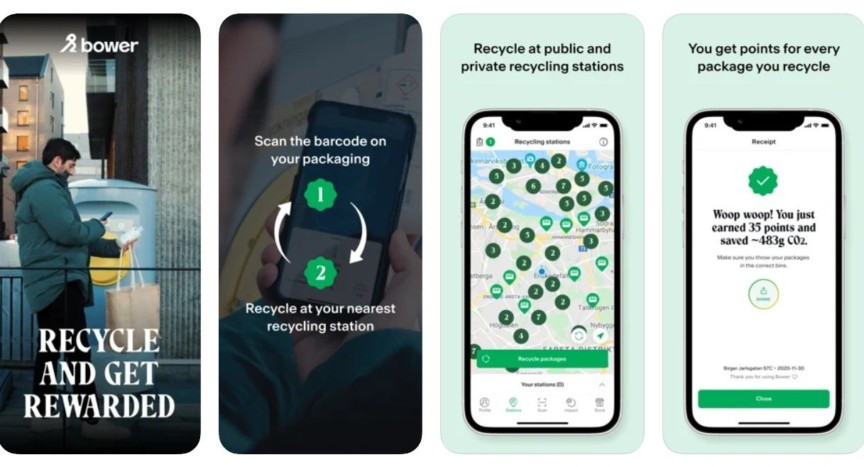 All kinds of waste lead to all kinds of problems. There are no universal solutions, but there IS an app that could help solve this important issue. It’s called Bower and it’s made by the same-named Swedish company.

Once installed on one’s phone, the Bower app will incentivize users to recycle and make other sustainable choices. It does that by directly rewarding users with money or coupons when they recycle everyday waste items. Users can scan anything with a barcode, from milk cartons to crisp packets, and receive rewards when they take the packaging to a recycling point — which can also be easily located within the app.

The app’s database of recyclable products is built through crowdsourcing, and users are constantly registering new barcodes and recycling points to help grow Bower’s reach. Once collected, rewards can be exchanged for coupons, redeemed as money or donated to charity.

Furthermore, Bower — which was co-founded in 2015 by sibling team Suwar Mert (CEO) and Berfin Roza Mert (COO) — also educates the public on waste and plastic pollution.

During 2021, Bower has become one of Sweden’s most popular apps, with its 300k users in the Nordic region alone recycling more than 1.4 million packages every month. The idea is to expand to other European markets, starting with the UK.

To that end, Bower has struck partnerships with a few big brands such as consumer giants Nestlé, L’Oréal and Unilever to help them reach their sustainability goals

“Bower’s app is about promoting what we can all do, as individuals, to reduce our carbon footprint and live in a more sustainable way,” Said Kamjar Hajabdolahi, Founding Partner of blq Invest, which is one of Bower’s investors. “This is a mission blq strongly believes in and so we’re excited to be part of Bower’s international expansion and look forward to supporting them as they expand globally. Meaningful data showing how people tend to recycle is crucial if we want to make sustainability scaleable for all, and bring brands along on that journey.”

In addition to blq Invest, the company’s other investors include Almi Invest GreenTech, Verdane Foundation, and Orkla Ventures. As of March 2022, Bower has raised €5 million in venture funding.

Bower, an app developed by an eco-minded team from Sweden, makes sure that every trip to a recycling center is rewarded. Users scan anything with a barcode to find out where the nearest recycling point is for that product. And if something cannot be recycled, Bower will educate the user about what exactly goes into packaging their favorite products.

The app uses crowdsourced data to list local recycling options, and users are encouraged to add to the directory. After scanning and sorting the waste at home, users receive the deposit value of each item directly to their account after confirming drop-off at an approved location. Rewards come in either monetary or coupon form and can be transferred between users, spent, or donated to a charity.

The app is free to download and is already popular in the Nordic region. As of early 2022, the company plans to expand to other European markets, starting with the UK.
Time to Implement
⏱️⏱️⏱️⏱️⏱️
Cost to Implement
💰💰💰💰💰
* estimates

FOR PUBLIC OFFICIALS:
If you're looking to encourage recycling in your community, perhaps you could contact Bower and explore some partnership opportunities to find out what would it take to bring their service to your place. Even if you're not in Europe, nothing stops you from asking - cause sooner or later, they will want to be a global app. And if you're in Europe, well, you can skip ahead the queue and try to be among the first communities to adopt Bower. It could help you win some points in the eyes of the growing number of "green voters."
FOR BUSINESSES:
If your business is in the "green space," perhaps you could find your place in the "Bower equation." It could involve organizing the recycle points in the areas your company covers and/or helping them partly digitize their operations so they could be compatible with Bower's platform. From that point on, you may find your place in some sort of partnership with Bower and prosper that way. Maybe you could get some of the government money in the process or at very least add more to your green credentials. This is an idea worth exploring, we would think.