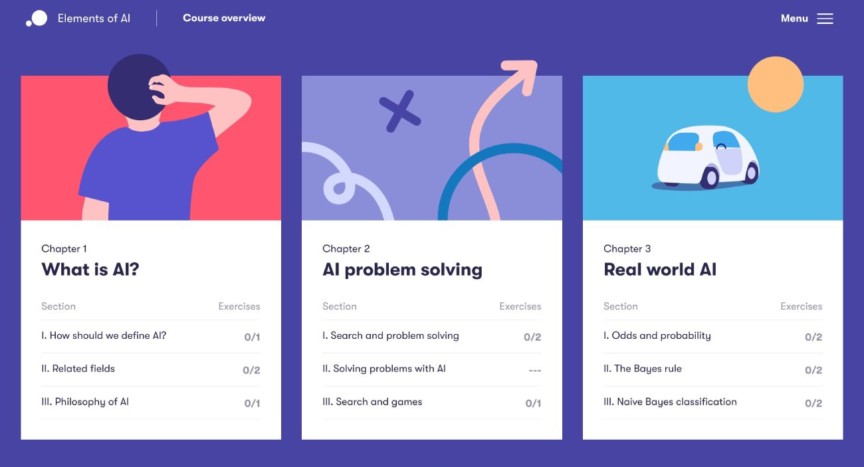 You probably already know that Scandinavian countries are prosperous and tech-advanced. One of the key ingredients of their success is their education system with Finland leading the world in that front. Well, that same country thinks there is room for improvement especially when we know that new challenges in the form of the fourth industrial revolution are incoming. And so, to better prepared its citizens for the “brave new world,” in 2018 – Finland launched a free online crash course about artificial intelligence.

According to them — and we at Sustainable Avenue share that opinion — it is essential for the general public to know the basics of AI so they could be better prepared for the challenges coming in the next few years.

A year later, that same course was translated into other popular languages as part of Finland’s EU’s rotating presidency. Specifically, the course — named Elements of AI — is available in English, Swedish, Estonian, Finnish, and German; with other languages coming in the future.

Made by private sector technology consultancy Reaktor and the University of Helsinki, the course itself is nicely designed, offering short tests at the end of each section. It covers a range of topics from the philosophical implications of AI to technical subjects like Bayesian probability. Elements of AI is supposed to take about six weeks to finish, with each section taking between five and 10 hours.

The Finnish government said it originally designed the course to give its citizen an advantage in AI and it managed to reach 1% of Finns, or about 55,000 people, in a few months. The expanded goal is to teach 1% of all Europeans basics on AI.

“Our investment has three goals: we want to equip EU citizens with digital skills for the future, we wish to increase practical understanding of what artificial intelligence is, and by doing so, we want to give a boost to the digital leadership of Europe,” said Finnish Minister of Employment Timo Harakka.

Finland is already a tech-savvy nation but that doesn't mean it plans to stop investing in the education of its citizens. Quite the contrary, the country launched a free online course on AI in 2018 in an effort to teach 1% of its population about basic concepts and implications of artificial intelligence. The idea, according to the authorities, was to better prepare the public for the upcoming challenges that are coming as part of the fourth industrial revolution.

In 2019, during the country's EU rotating presidency, the original goal was expanded to include 1% of all Europeans — and so the course, named Elements of AI, was translated to all popular languages. Today everyone speaking English, German, Swedish, Estonian, and a few other languages can join in and learn about the inns and outs of AI — and prepare himself/herself for what will most likely be an uncertain future.
Time to Implement
⏱️⏱️⏱️⏱️⏱️
Cost to Implement
💰💰💰💰💰
* estimates

FOR PUBLIC OFFICIALS:
If "Elements of AI" is not available in the language of your municipality (we have readers from all over the world), you may want to contact the course makers and offer translation services for free; so that your constituents could also be better prepared for the fourth industrial revolution. Alternatively, if there is no need for translation, you may want to explore the option of promoting that course in your community. After all, educated people create better products and services, leading to more taxes and a better life for everyone. And let's not forget votes and your own career...
FOR BUSINESSES:
This could be a nice PR campaign for a savvy agency which could help promote this online course in communities it serves. And if the course is not available in your language - you may want to contact "Elements of AI" creators and offer them translation services (for free). In addition, you may want to come up with a good marketing and PR strategy on educating the public and present it to local authorities. They should be interested in having their constituents educated about this life-changing technology. After all, such campaigns and free education could bring them votes, right?