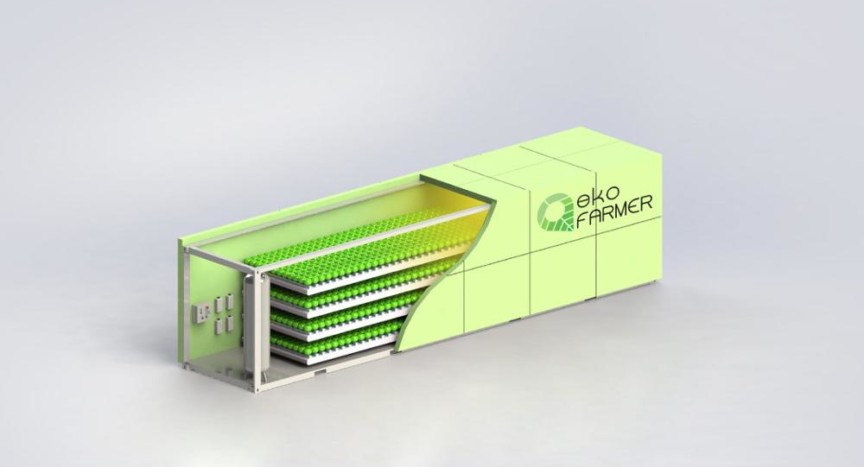 Finnish company Exsilio has developed a high-tech solution — called EkoFARMER — for cultivating salad, herbs, and medicinal plants among others, in urban environments. The solution comprises a renovated container, where ecological local food can be cultivated efficiently.

Specifically, it allows for crops to be organized in layers, to maximize the growing space. And while most of the farming processes are fully automated, some elements could be manually controlled — including water levels, light, humidity, and carbon dioxide.

Such a setup, according to Exsilio’s CEO Thomas Tapio, makes it ideal for restaurants and institutional kitchens wanting to produce their own ingredients.

EkoFARMER is a 13-meter long farming module that forms a closed system, requiring only electricity and water to function. This means that the level of humidity, water, and carbon dioxide can be controlled efficiently in order to produce the optimal yield and the best possible flavor. Unlike the majority of other similar systems, EkoFARMER does not use any other nutrients than the ecological cultivation soil developed by Kekkilä.

The module can be placed almost anywhere, it does not occupy much space, and it is also transferable. It can produce approximately 55,000 pots of salad per year, the company claims, which is at least three times the amount produced in a greenhouse — since the cultivated plants are located on multiple floors. Therefore, plants can be cultivated all year round and the cultivation period can be shortened, as the amount of light and humidity can be controlled perfectly.

Exsilio is both selling and leasing EkoFARMER.

EkoFARMER is all about urban farming, making it possible for small businesses such as restaurants and institutional kitchens to produce their own ingredients. At the same time, the solution provides a way to reduce food miles and gain certainty in knowing exactly where the food is coming from. The company also envisions EkoFARMER empowering individuals or organizations to start up their own farming micro-enterprise, or societies offering meaningful activities for the unemployed.
Time to Implement
⏱️⏱️⏱️⏱️⏱️
Cost to Implement
💰💰💰💰💰
* estimates

FOR PUBLIC OFFICIALS:
With urban farming emerging as a hot new trend in recent years, farm-in-a-box projects like EkoFARMER not only make (local) government officials look good, but could also help create new jobs — especially for underprivileged social groups. Furthermore, EkoFARMER modules could also find their way in schools and university campuses.
FOR BUSINESSES:
Creating a project that would introduce one or more urban farms in a city is not a small task, and obviously - there is money to be made in such an endeavor. Smart companies could pitch it as a way to help the youth learn about where their food is coming from, as well as a project that would provide jobs for underprivileged social groups.