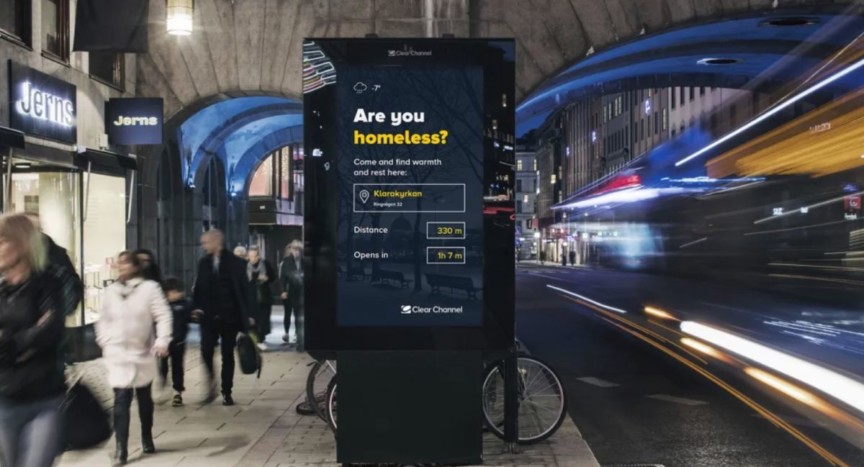 The advertising company Clear Channel in Stockholm owns more than 1,000 digital kiosks serving an endless loop of ads to citizens.

Beyond commercial clients, the firm has also partnered with the city to launch a neat Out-of-Home (OOH) campaign, offering homeless people directions to the nearest shelter on particularly cold nights. In this way, they are doubling the usefulness of the (outdoor) media to also do something good — according to David Klagsbrun, head of communications at Clear Channel Scandinavia.

Clear Channel has screens installed across the Swedish capital — including in the city center and at subway stops — which is actually where the homeless spend their lives. So, when temperatures drop below 19°F (-7°C), the company is using those screens to help homeless find shelter — which during that time is available from all sorts of organizations like churches and community centers.

According to Clear Channel’s findings, most homeless people in Stockholm know where there are shelters, but during emergencies – they don’t know where the new ones will be. This is exactly the sort of scenario a digital billboard, full of dynamic information, can respond to perfectly.

With the help of nonprofits, the company identified 53 billboards within inner Stockholm that were close to many homeless people. On cold winter nights, these billboards play two regular ad loops, with one ad slot in each replaced with a public service announcement. The first loop displays the nearest open shelter, and the second loop displays information for volunteers — including items most needed for donation, from coats to toothpaste.

Klagsbrun said it is hard to measure the impact of this OOH campaign as there is no reference to compare to, but after talking to people who staff the shelters – they say there’s a lot of new faces coming into the shelters they haven’t seen before. “And more pertinently, there are more volunteers and necessities donated than previous years,” he added.

In other words, the ads can not only serve homeless people directly; they can also mobilize citizens to be more responsive to their needs.

The project was developed by Prime Weber Shandwick on behalf of Clear Channel Sweden, which itself is part of Clear Channel Outdoor Holdings — one of the world’s largest outdoor advertising companies with a broad portfolio of 450,000 classic and digital surfaces in 31 countries.

Clear Channel Sweden is using its digital billboards to help Stockholm's homeless find their nearest shelter. The Out-of-Home campaign sees ad content from the digital billboards replaced with directions to the nearest homeless shelter when the temperature drops to freezing conditions. By using this channel, the campaign can connect with a target group that is otherwise difficult to reach.

On the other hand, the campaign is also engaging citizens, providing them with information on where to donate necessities, how to become a volunteer, and so on. All of the ads are run for free in partnership with the city of Stockholm, local churches and NGOs.
Time to Implement
⏱️⏱️⏱️⏱️⏱️
Cost to Implement
💰💰💰💰💰
* estimates

FOR PUBLIC OFFICIALS:
Even if the city you work in doesn't have an organized system like Stockholm, something could be done for homeless people when the weather goes wild. To that end pretty much any city could benefit from a similar scheme and partner with local out-of-home ad company to offer useful information through their billboards while also engaging citizens to volunteer. And naturally, for the person leading this effort - it could help his/her political career.
FOR BUSINESSES:
This could be a neat PR stunt for an out-of-home ad company or any other business that would partner with them to launch such a campaign. After all, it helps solve the real problem (homelessness) while also engaging citizens in local problem-solving. In addition, it could also help your company get closer to the local government and potentially score additional contracts down the road.