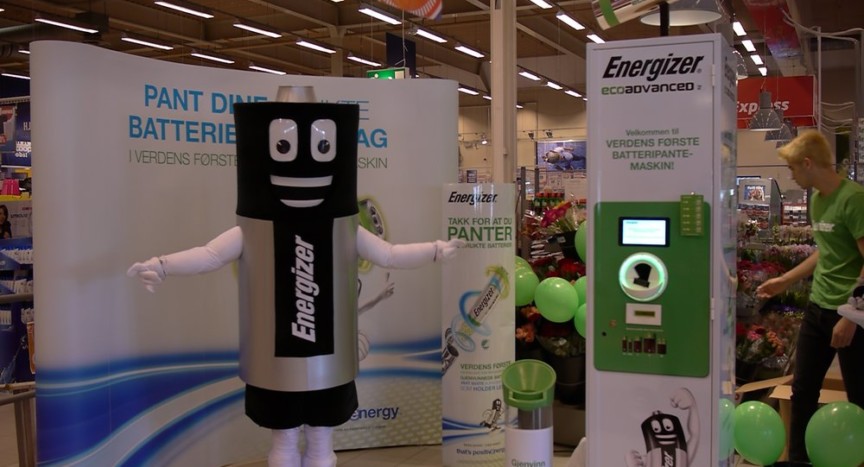 Most of us know that throwing batteries into the trash is bad for the environment, but much of the population still discard them instead of using the battery recycling banks offered by many supermarkets.

The machine enables customers to return all kinds of household batteries — including AA, AAA, C, D and 9V. It can identify the size of the battery, counts them and returns a receipt that can include for example a discount coupon or any other kind of refund in written format. The logic behind the refund is programmable and possible to change if needed.

The machine is targeted for battery collection points such as retail stores and battery manufacturers, enabling them to introduce incentives while collecting statistics on returned batteries.

The system is a complete identification and return point for all cylindrical and 9V batteries with a total capacity of 50kgs (100lbs). The machine is accessible through the internet and can signal when it needs to be emptied. It is also fireproof and specially developed for being able to contain hazardous material.

The first Battery Refund machine was launched on Earth Day, 22nd April 2017, at Coop Norway and initiated and funded by Energizer.

Many types of batteries employ toxic materials such as lead, mercury, and cadmium as an electrode or electrolyte. When each battery reaches the end of life it must be disposed of to prevent environmental damage. Recycling batteries can recover toxic substances, which can then be used for new batteries. The Battery Refund machine is one piece of the puzzle to solve the e-waste conundrum. It is easy to use for end-users and requires little to no training to operate.
Time to Implement
⏱️⏱️⏱️⏱️⏱️
Cost to Implement
💰💰💰💰💰
* estimates

FOR PUBLIC OFFICIALS:
A local government could procure these machines and place them in dense areas, like the city center, university and so on — helping tackle the e-waste problem. It doesn't have to do it alone and could rather engage the private sector (i.e. battery makers and electronics retailers) to chip in for (part of) the cost of the procurement.
FOR BUSINESSES:
The cost of procuring these machines could be spread among multiple parties, the local government being one of them. It could be a good PR/marketing opportunity for a smart, eco-friendly company or a whole project that could involve a few Battery Refund machines placed around multiple locations. In that sense, it could also be a good business.