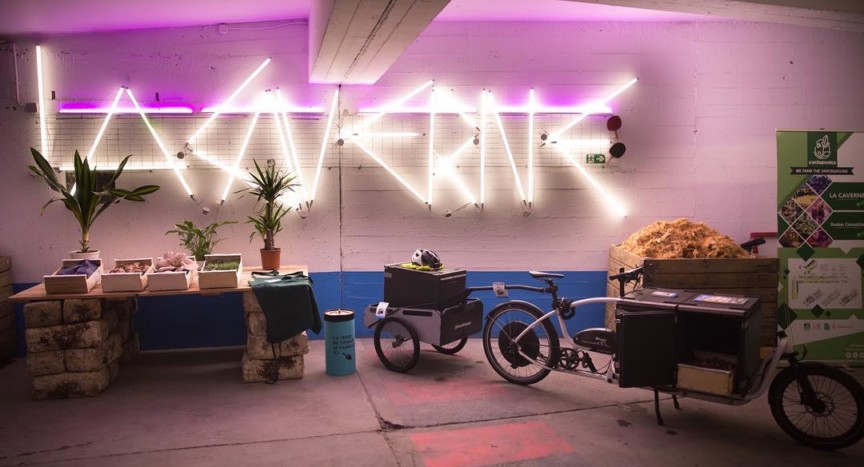 Urban farming is a growing trend with startups trying to take advantage of the otherwise unused (or little-used) spaces for cultivating food.

One of the more interesting projects in this field, called La Caverne (the cave), comes from a French startup called Cycloponics that turned an underground garage in Paris into a vertical farm to grow mushrooms, lettuce, and herbs — providing fresh food for local people.

Said parking spaces were built by the government during the 1960’s to 1970’s but they became abandoned as the driving population declined. Cycloponics thus decided to grow vegetables via an urban agriculture project in a garage under the city.

The company’s founders Jean-Noël Gertz and Théophile Champagnat had their first such “gig” in 2017 when they transformed an old military storage room in Strasbourg into an urban farming site. That project has since been refined and brought to Paris, where they rented the 3,500-square-meter (37,700-square-foot) underground garage from a social building for a new farm.

Located underneath La Chapelle, a neighborhood north of central Paris, the farm uses an agricultural technique called hydroponic farming, in which greens are grown under LEDs in nutrient-rich water without sunlight or soil.

La Caverne has clusters of button, shiitake, and oyster mushrooms growing on bricks of composted manure. It also harvests chicory (a coffee substitute), which doesn’t require any sunlight to grow, and microgreens — which sit in beds of nutrient-rich water rather than soil.

Cycloponics launched the farm with the goal of growing veggies year-round and closer to the city compared to traditional outdoor farms. It sells the produce at local farmers’ markets, restaurants, and independent grocery stores — with the goal of reaching the yearly production target of 54 tones.

The company aims to be a part of the “renewal of tomorrow’s cities by transforming unused urban space to produce amazing vegetables.”

Cycloponics has brought urban farming to an underground garage in Paris. Its farm, called La Caverne, uses hydroponic techniques to bring organic farming into abandoned urban areas without the use of soil or natural sunlight. It grows lettuce, herbs, and mushrooms that are sold to local markets and restaurants.

The company aims to be a part of the "renewal of tomorrow's cities by transforming unused urban space to produce amazing vegetables." Cycloponicsi aims to hit the yearly production target of 54 tones at La Caverne.
Time to Implement
⏱️⏱️⏱️⏱️⏱️
Cost to Implement
💰💰💰💰💰
* estimates

FOR PUBLIC OFFICIALS:
It makes perfect sense for any local politician to support urban farming efforts such as La Caverne. It not only delivers healthy food to residents but also brings new kinds of jobs to the city. Up until recently, farming was not possible in the urban environment but with the advent of new technologies - it is not only possible but also potentially profitable business with prospects for further growth in the future.
FOR BUSINESSES:
Now's the time to join the urban farming revolution before it becomes a crowded market. Right now, businesses can buy or rent a less attractive space (as far as "regular" businesses are considered) for next to nothing and use it to establish an urban farm. If needed - learn from the pros. Perhaps you could contact Cycloponics to ask (pay) for their (best) practices or check some other urban farming projects on our site. There's money to be made in this market if you act early.